Driving action towards a sustainable future

Canadian Living magazine named her one of its 10 Amazing Canadians Making the World a Cleaner, Greener Place. She co-founded the longest-running Repair Café in Canada – a grassroots, volunteer group that aims to divert broken items from landfills. And at Sheridan, she helps lead green initiatives across three Greater Toronto Area campuses. Wai Chu Cheng, Coordinator in Sheridan’s Office for Sustainability, has devoted her education and career in pursuit of positive environmental change. The change that’s required to combat global warming, the degradation of natural resources and threats to the survival of species must be far-reaching and unprecedented – so say environmental experts. One’s individual contributions may at times feel inconsequential. But Cheng is certain that it’s the opposite; they’re vital to creating an impact. It’s that belief, combined with her persistence, dedication and patience, that motivates her work.

Along with green transportation and promoting biodiversity, waste is a focal point of Cheng’s mandate in her role at Sheridan. It’s central to the college’s efforts to become a Zero Waste campus. Sorting waste in the proper bins is up to individuals and if done correctly, can have far-reaching implications. The organic waste produced at the college is turned into electricity and fertilizer, and recyclable materials like paper, plastic and aluminum become new, valuable products. If bins are contaminated with improperly placed waste, its contents end up in the landfill. This has a significant cost to the environment and places a financial burden on the college.

In 2019, it may seem like the proper sorting of waste is the very minimum a person can do to be environmentally responsible. Rather than being discouraged by having to repeatedly educate on this point, Cheng sees it a part of an opportunity to inspire a paradigm shift in how we think about the things we consume.

“We need to shift to a circular economy model, in which materials at the end of their life won’t get discarded but are put back into the system for reuse.” – Wai Chu Cheng 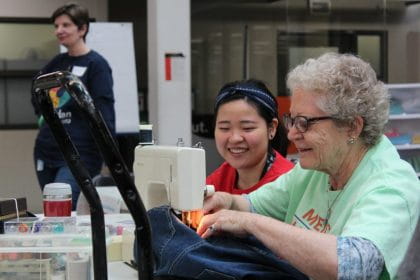 “The linear model of ‘take, make and dispose’ is not sustainable,” says Cheng. “We need to shift to a circular economy model, in which materials at the end of their life won’t get discarded but are put back into the system for reuse. This will force us to look at how we consume things, what those things are made of and how they’re packaged and how we prevent waste from polluting the environment.”

Extending the life of items is the goal of the Repair Café movement that Cheng has been involved in since 2013. She brought the initiative to Sheridan as part of its waste-reduction efforts and to give members of the school community the opportunity to participate in a fun, collaborative event. Volunteer ‘fixers’ flex their creativity and problem-solving skills, while attendees shadow them and learn how to extend the life of their item should it break again. “I love the positive vibe,” says Cheng, who describes the Repair Café atmosphere as energizing. “We’re all there trying to build something better.”

Repair Café has been so successful at Sheridan that the Brampton Library recruited Cheng to help host its own event, and has since registered as a member of the Repair Café Foundation. She’s also been mentoring staff from the Town of Oakville and the University of Toronto Mississauga and OCAD University, providing guidance on how to launch their own Cafés. Cheng has hopes of one day building a permanent centre for repair, education and research somewhere in the Greater Toronto Area. “I see it as important social infrastructure that could bring about lasting change,” she says. 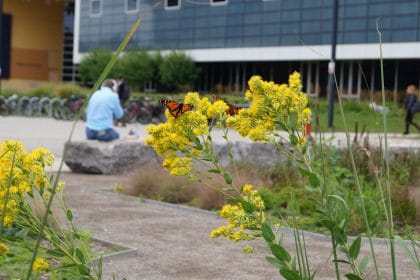 The Medicine Wheel Garden at Sheridan’s Trafalgar Campus in Oakville is another point of pride for Cheng. Previously occupying the space where the garden now sits was an invasive species called Buckthorn. After its removal, the Sustainability team collaborated with the Centre for Indigenous Learning and Support to design a garden that’s rooted in traditional teachings and symbolically reflects the circle of life. It’s filled with native and pollinator plant species and when in full bloom, attracts various insects like monarch butterflies and is a space for quiet reflection by students and staff.

To promote green transportation at Sheridan, Cheng established a bicycle program for the Hazel McCallion Campus in Mississauga and Davis Campus in Brampton with $165,000 of support from the Region of Peel. With the funding, a Bicycle and Sustainable Transportation Coordinator was hired to help oversee the recently-launched Sheridan Bike Hub on campus in Mississauga. The Hub stores tools and has space for on-site bike tune-ups, and students and employees can rent a bike for free. 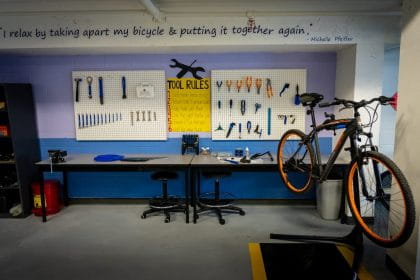 Connecting with nature, spending time appreciating its beauty and serenity, is something Cheng sees as another opportunity to encourage change. An avid outdoorsperson, she’s routinely reminded of what’s at stake if we act irresponsibly toward the environment. “When you allow yourselves those special moments with nature, it can inspire you to think about ways to help sustain it,” she explains.

“At the end of the day, it’s about asking people to care…I encourage others to step up, ask questions and let your passion drive you to make change.” – Wai Chu Cheng

Education is arguably the most important component of Cheng’s work. “To change people’s behaviours, you need to first change their minds,” she says. To help educate and mobilize members of Sheridan’s community around environmental initiatives she launched Green Teams for staff and Mission Zero volunteer opportunities for students. Both groups help organize and participate in events that she oversees.

One of Cheng’s latest endeavours is writing a course she hopes to teach at Sheridan about waste. Its focus would be on waste related to the bigger economy and its impact on business, supply chain and ethical and social issues related to the environment, such as how climate change disproportionately affects people living in poverty.

“At the end of the day, it’s about asking people to care. You don’t need to be an environmental expert to do something meaningful. When I started Repair Café Toronto I didn’t have fixing skills, but I felt inclined to act in some way,” she says. “I encourage others to step up, ask questions and let your passion drive you to make change.”

Penning a new path as a musical composer

In the summer of 2018, Ben Page participated in a Hamilton, Ontario workshop for Leaving Eden, a musical by Canadian…