Stacey Chomiak’s memoir, Still Stace – My Gay Christian Coming-of-Age Story, is on the shelves at Indigo and she has just finished the audio recording of the book in which she recreates her journey of despair and discovery as a gay Christian struggling to reconcile her sexuality with her religion. 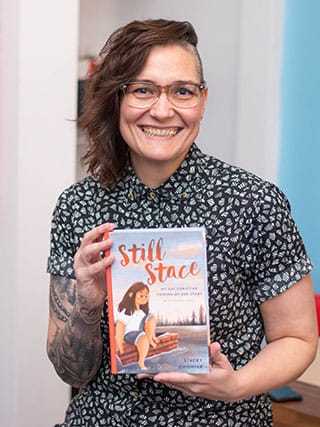 Not too long ago, a book deal was just a dream and the thought of having her name in Indigo’s catalogues seemed impossible to Chomiak. “In early 2019, when Still Stace was still mostly in my head…I walked to this Indigo bookstore on my lunch break… I slowly perused the bookshelves, wondering if one day, I would ever see my name on a cover amongst the throng of books. It seemed almost too large to even dare to dream. Almost – I still dared,” she writes in her blog.

“On May 2, 2022 – after our final day of recording the audiobook – I visited this location again. This time, I saw my name. And I signed some copies of Still Stace – which they had even displayed out front!”

“My story is really important because it embraces both – Christianity and queerness – and you can find peace with both.”

While making her mark as a first-time author is a feat in itself, there’s added joy in the publication of the memoir for Chomiak. It’s the fulfilment of a promise she had made to herself at a time when she believed she had hit rock bottom, and she didn’t see a way forward as a gay person of faith. “I had vowed that if ever I found peace and if my story could help others like me, I would tell it,” she says.

A lonely struggle to belong

For 13 years, Chomiak (Bachelor of Animation ’09) struggled with her gay identity. She felt rejected and alienated from the church she adored, the family she loved, and the friends she had. During those turbulent years, she wasn’t sure if even the God she worshipped would embrace her true self. It was a lonely life and she had nobody to turn to.

“I just had a moment, some time alone with God, really. And I said to Him: ‘This is who I am. And I've tried praying for this to change for 13 years and I can't. And I don't want to abandon my faith.’”

“I come from the Christian faith and for me, there were either gay people or there were Christian people; there were no people who had both of those labels together. In my upbringing in my church, I didn’t know anybody who called themselves gay Christian. Being gay topped the hierarchy of sins and I realized very quickly I couldn't really share my real sexual identity. I just internalized it all.” she says. Riddled with doubt, shame, and a desperate need to belong, Chomiak underwent conversion therapy in the hope that once ‘cured’ of her gayness, she could return to the fold as an ‘ex-gay.’ She says she tried very hard to ‘pray the gay away,’ and the experience was terrible. It left her shaken, but it also pushed her to the brink and to reach out directly to her God, without the interface of clergy or church, for the answers she was looking for.

“I just had a moment, some time alone with God, really. And I said to Him: ‘This is who I am. And I've tried praying for this to change for 13 years and I can't. And also, I can't and don't want to abandon my faith. So what does it look like if I ask You to bless both of these things?’ And really it sounds ridiculous, but when I asked God that, He blessed both,” Chomiak says.

“I’m so grateful that I didn't give up, and that I was able to keep going and find outlets for the struggle. And I'm grateful that I have this chance now to tell my story and to share it with people.”

That metaphysical experience stilled the internal chaos Chomiak had been facing. She realized her faith and her sexuality were not at odds, and she wanted to let others know it too, so they might avoid the pain she herself experienced while growing up. The need to tell her story became stronger after she and her wife had their two kids.

Chomiak is an Animation Designer at Doberman Pictures, and she also illustrates children’s books. In 2019, she got an agent, which led her to illustrate the LGBTQ+-themed Rainbow Boy. She worked out a rough outline for her memoir and soon, she had a book deal and an opportunity to tell her story.

“I feel that there isn’t a lot of representation for queer people of faith who have been able to reconcile their sexuality with their religion. My story is really important because it embraces both – Christianity and queerness – you can find peace with both,” she says. The response to the memoir from queer people of faith, and from all corners, has encouraged Chomiak to continue to push boundaries as an LGBTQ2+ speaker. She takes her message wherever she can: addressing meetings and conferences in churches, schools and among youth. Having hidden her own sexual identity till she was 30 years old, she understands the fear, self-doubt and alienation felt by many who are unable to reconcile their faith with their true selves.

“It is important to understand that often people can look and appear to be happy and totally fine. But beneath the surface, they could have so much chaos going on because they don’t have a safe space to share their agony,” she says. “I’m so grateful that I didn't give up, and that I was able to keep going and find outlets for the struggle. And I'm grateful that I have this chance now to tell my story and to share it with people.”