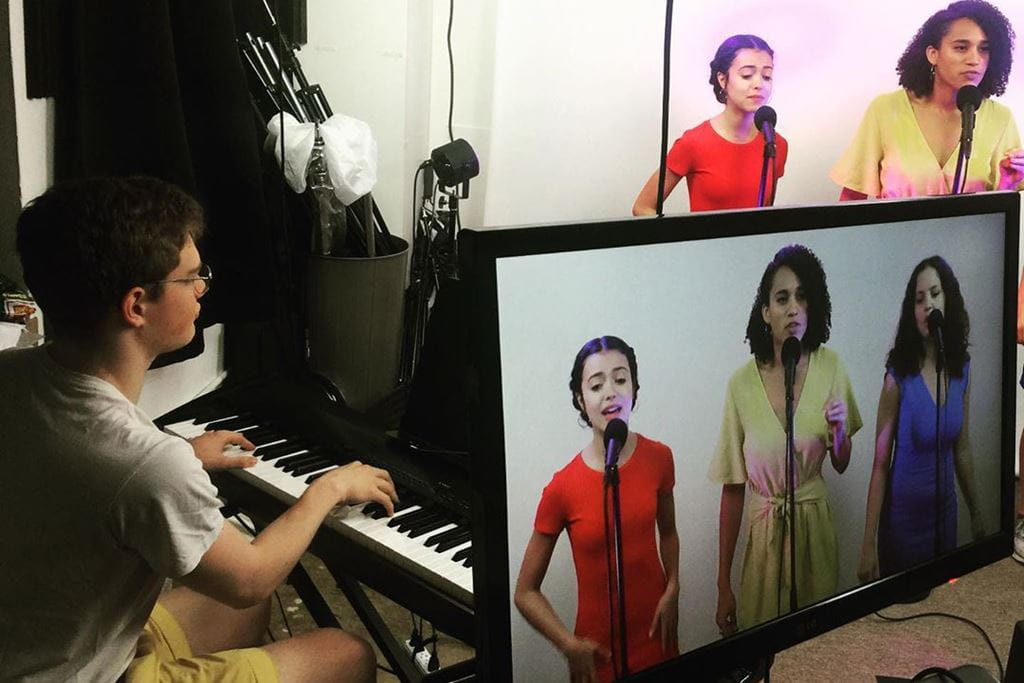 Penning a new path as a musical composer

In the summer of 2018, Ben Page participated in a Hamilton, Ontario workshop for Leaving Eden, a musical by Canadian writer Jenny Waxman. It’s based on the myth of Lilith, Adam’s first wife, exploring themes of gender equality and sexual politics. Page was excited to tackle the development of a supporting character, Ancient Adam. As he read through the script, he found one of his solos had words but no music. Never did he think that by offering to write it, he’d be kickstarting a journey to becoming a musical composer.

Bringing new musicals to stage is a challenge that’s enticed Page since high school. He’d been to Sheridan to see Senza Luce and 33 1/3, two works incubated through the college’s Canadian Music Theatre Project (CMTP). It was that experience as an audience member that solidified Page’s decision to pursue Sheridan’s Honours Bachelor of Music Theatre Performance program. Students get to spend their final year working with visiting writers on their up-and-coming works.

But composing music for Leaving Eden would be unlike any of his previous music-writing experience. After penning that first song for his character called The King and in turn impressing Waxman, he’d write 13 more for Waxman’s musical in only 12 months. This creative process was a departure from the 20-year-old’s usual style of ruminating on a song for at least a year before recording and sharing it with an audience. It helped, says Page, that Waxman modeled an efficient and flexible style and is such a generous writer. “Jenny isn’t precious about her work,” he explains. “She’s open to cutting and restructuring a song to get it to a new place.”

Press play to listen to a demo of The King by Ben Page.

Leaving parts of songs on the cutting-room floor is more exciting than discouraging for Page, who sees it as an opportunity to move toward something better. “Cutting a line or a word can positively influence a musical work as a whole,” says Page. “While it may not make it to the final song, those pieces left behind can inform the rest of the material without bogging it down.” Page brought to the creative process a fresh set of ears and eyes as he was new to the work that Waxman had been developing for many years. He also shared nuanced performance considerations from his Sheridan training.

“Sheridan professors teach us to thrive in the moments of not knowing. We’re taught to embrace different ways of approaching creativity, not to force it, and to let things happen the way they want to.” – Ben Page

“Ben came into the project later than normal and beautifully navigated honouring all the work I had done while taking his rightful ownership over a project’s musical storytelling,” says Waxman. “We took a chance on each other and came out on the other side stronger artists and better friends. He’s a wonderful collaborator, far beyond his years.”

To get 14 songs locked in time to present Leaving Eden at the 14th-annual New York Musical Festival (NYMF) in July 2019, Page and Waxman had many late nights in the writing room. Page approached each song he wrote by first reading aloud Waxman’s lyrics, finding the words that needed to be emphasized for the overarching story and then began to shape the melody. “There’s a natural rhythm that comes with spoken words,” says Page. “I build a song around the meter and borrow from different genres and styles. That’s the beauty of music theatre, audiences are open to all styles and expect to be surprised.” 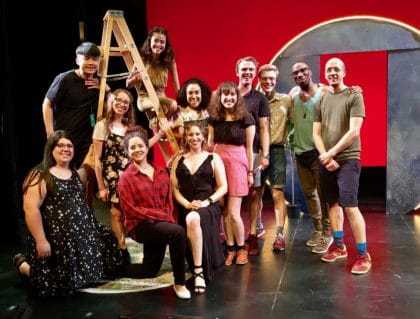 Just weeks before its first staging, Page and Waxman road-tripped to New York City to begin rehearsals with a slate of Broadway actors including Janet Krupin, Gabrielle McClinton and Azudi Onyejekwe. Page was on the keys as rehearsal pianist when he and Waxman heard their songs performed for the first time – an eye-opening experience for the new composer. Throughout rehearsals there were further tweaks and cuts to songs before its premiere at the Alice Griffin Jewel Box Theatre. Only when the actors took the stage for the first time did Page accept that he couldn’t share any more notes and had to let go of the work he’d been so heavily involved in for the past months.

“It was a bit of an out-of-body experience being on the red carpet and then in the audience,” he says. “There were moments during the show where I had to tell myself not to stand up and shout, ‘yes, I know we still have some work to do on that number!’” Having the support of his friends and family in New York at the theatre allowed him to take time to enjoy and embrace the milestone moment in his young career. Coincidentally, Ben’s father, Canadian Music Hall of Fame inductee Steven Page, found rising success around the same age.

“We took a chance on each other and came out on the other side stronger artists and better friends.” – Jenny Waxman

Leaving Eden left NYMF with the award for Best Musical and eight other honours including a Runner-Up Finalist nod for Page for Outstanding Music. Now back in Oakville, Ontario for his final year at Sheridan, he’ll make his on-stage return in a new musical work through the CMTP. He also has his sights set on other writing projects, having gained confidence from his award-winning musical debut.

His ideal career would bring both opportunities in performing and writing, but for now, he’s okay with living in the moment and seeing where his creativity takes him. “Sheridan professors teach us to thrive in the moments of not knowing,” says Page. “We’re taught to embrace different ways of approaching creativity, not to force it, and to let things happen the way they want to.”

Find out more about Leaving Eden and what’s next for the new musical.

Pictured at top of page: Ben Page on the piano at a rehearsal for Leaving Eden in New York City.