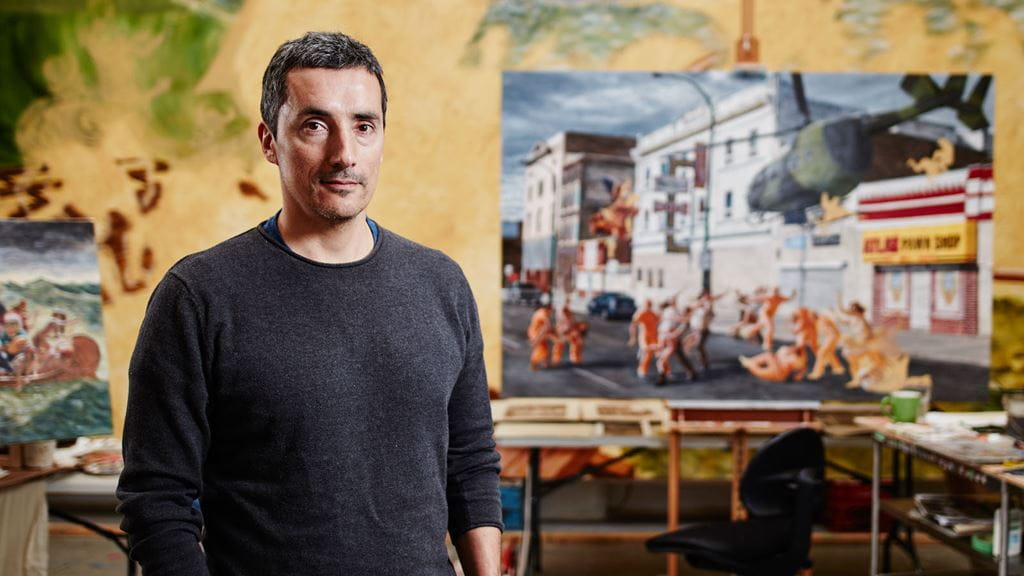 Of Cree descent, Monkman has become one of Canada’s most celebrated contemporary artists for his paintings, films, installations and performances. His work is part of collections in the National Gallery of Canada, the Art Gallery of Ontario and the Smithsonian, among many others venues.

Along with the beauty and provocative imagery in Monkman’s art is a generous dollop of fun. Miss Chief Eagle Testickle, the artist’s two-spirited alter ego is a recurring character in his work and a campy conduit for Monkman’s social satire which he uses to draw people into his art. 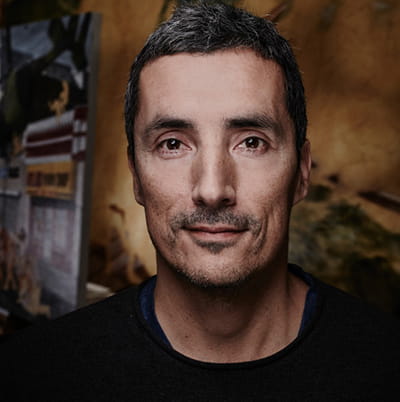 “Humour disarms people. They are then open to receiving other messages that are more serious,” says Monkman, a 1986 Sheridan illustration graduate. “I didn’t want to create just a pretty picture hanging on a wall. I wanted to deal with themes that I felt were important – how First Nations people have been portrayed in terms of art history, the impact of colonialism and the church.”

His critically-praised exhibit The Rise and Fall of Civilization at Toronto’s Gardiner Museum in late 2015 took viewers on a vast, visual journey through Indigenous history, focusing on the 19th century bison slaughter, with Miss Chief overseeing the spectacle.

“Sophisticated work should exist in many layers – humorous, serious, hard-edged,” according to Monkman. “That’s what holds peoples’ interest. I would like people to spend 10 minutes instead of 10 seconds in front of one of my works.”

Monkman’s award-winning short film and video works have been screened at various national and international festivals, including the Berlinale and TIFF. Watch Monkman’s most recent film below, Casualties of Modernity, his analysis of the conditions afflicting modern and contemporary art. Working in both his Toronto and Prince Edward County studios, Monkman is now deep into his most ambitious project to date: a massive, multi-installation exhibit opening in Toronto in 2017 to mark Canada’s 150th birthday. A reflection of Canada’s history from a First Nations perspective, the exhibit will tour across the country over two years.

As a young person growing up in Winnipeg, Monkman always knew he wanted to be an artist, and he calls coming to Sheridan to study illustration “an easy decision.” His older brother Don graduated from Sheridan’s illustration program, and Monkman knew the college could offer him the skills-based training that would translate into practical application.

After graduation, Monkman worked as a storyboard artist both at an agency and as a freelancer before developing his own art practice. He explored non-representational, abstract work, but became frustrated with what he viewed as the narrowness of abstract painting. “It had become too personal a language, too limited in scope to communicate what I felt needed to be addressed,” says Monkman.

I believe painting still has that power – to move people emotionally and allow them to think about history differently. 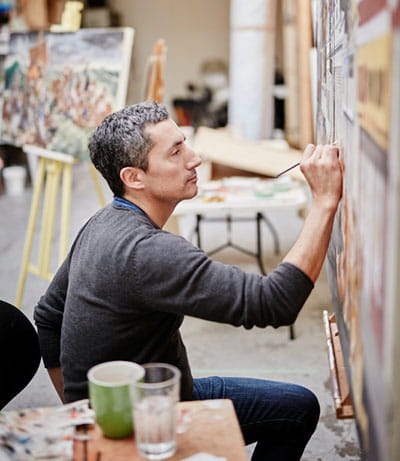 Herein lies his strong connection to the work of both 19th century painters and that of the old masters – paintings that he believes acted as important communication tools through their powerful storytelling ability.

“I feel that photography replaced a lot of the functions that painting had, and as a result, people lost the interest and skills they needed to have painting convey narratives. These stories, coupled with other emotional elements, are at the heart of what makes a painting great.”

Monkman remains devoted to the relatively solitary pursuit of painting, while continuing to communicate through the more collaborative mediums of filmmaking and performing arts. “I have made a commitment to become a better painter because I believe painting still has that power – to move people emotionally and allow them to think about history differently.”

Click here to watch this video of Monkman in his Prince Edward County, Ontario studio by Jackie Shawn.

Click here to listen to his interview on CBC Radio in April 2016.