Interaction designer heads across the pond to Facebook London

As she completes her final year in Sheridan’s Honours Bachelor of Interaction Design program, Alex Thompson already has her first job locked up – at Facebook’s office in London, England. She secured a coveted three-month internship opportunity in the summer of 2019 that resulted in an offer of employment post-dated for a year later, soon after she’ll graduate.

Thompson would be the first to admit that despite validation of her abilities from Facebook and markers of success throughout her education, she’s surprised – pleasantly – to feel so comfortable working on the ads team of one of the world’s largest web corporations. After all, her journey to Sheridan’s innovative and relatively new Interaction Design program started with an undergrad in philosophy in Prince Edward Island, her home province. 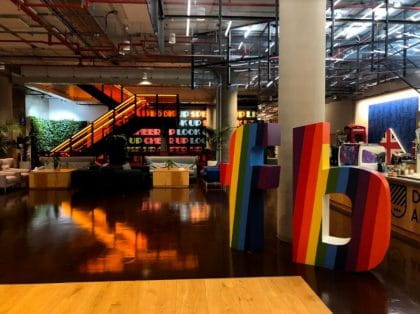 “It’s not every day you get the opportunity to work on products that touch one-third of the world’s population.”

However, she’s come to appreciate that the study of interaction design and her philosophy roots aren’t so dissimilar. “Philosophy is the art of examining the way that people think, and that’s the backbone of designing anything that people use,” she says. “Learning how to break down complex ideas and figuring out how to explain them, work with them and build them into real tools is something I focused on during my time at Facebook.”

That focus is where Thompson’s skills shine and an area she was encouraged to hone in on by various Sheridan professors. Designing things for people requires a high level of understanding of all the component parts and how they best work together. An awareness of one’s strengths is part of the learning journey in Sheridan’s Interaction Design program, which prepares students as generalists with a range of in-demand skills like user-centred design, 2D and 3D design, programming a variety of devices and business practices and entrepreneurship.

You can’t get much more complex than Facebook’s ad machine, the social network’s core money-making model – so Thompson’s product design position on its Catalog team in London was quite fitting. As an intern there, she wasn’t on the periphery of design and big projects but was required to lead meaningful projects. “It was like a three-month job interview,” she says. While stressful at times, the supportive environment at Facebook that Thompson experienced made it incredibly rewarding.

Public opinion of Facebook and its ads is complicated, something Thompson acknowledges, but her first-hand experience is that the culture is incredibly open, and employees are continually striving to make its product better for companies and customers. “Before going to Facebook it felt like there was a big blue wall around it,” she says. “And then you walk in and you see a concern for ethics and transparency and there’s a culture of collaboration.” Thompson participated in weekly online Q&As for interns only with Facebook CEO Mark Zuckerberg and COO Sheryl Sandberg, and her manager provided consistent and honest feedback to help position her for a return offer.

“Philosophy is the art of examining the way that people think, and that’s the backbone of designing anything that people use.”

Completing her final year without the burden of finding employment has been a welcome experience for Thompson. “It’s nice to take a breath,” she says. “I’m trying to spend as much time as I can reaching out to students in the program to offer guidance and mentorship.” One way she does this is as a founding member of the program’s Hackademics Club, which promotes the importance of participating in hackathons to gain additional hands-on experience and to network. Thompson secured a previous internship with startup Smile CDR after coming third in the ArthritisHack at MaRS Discovery District in Toronto where she met the company’s CTO, James Agnew. 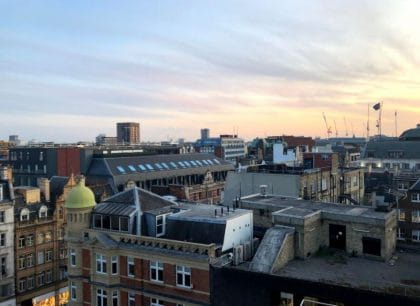 Accepting her Facebook offer was a big decision for the up-and-coming designer, considering it requires moving her life to a new continent. “It’s not every day you get the opportunity to work on products that touch one-third of the world’s population. I want to feel like I’m contributing as an interaction designer and this role would allow me to achieve that,” she says.

“And I love London. It’s very multicultural and Facebook is very international. I worked with a team that included people from Poland, France, Spain, Germany, the Philippines, Iran, Belarus, the Czech Republic and the United Kingdom,” she says. “Sitting down to dinner with your co-workers made for interesting conversation and was an invaluable experience when growing into a career that involves designing things for people from all walks of life.”