Jul 15, 2022
Three Sheridan alumni from the Faculty of Animation, Arts & Design have received a nod at the prestigious Primetime Emmy Awards this year in recognition of their excellence in television production. 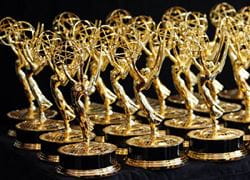 Craig Henighan (Media Arts ’95), Scott Riopelle (Animation ’01), and Carol Beadle (Fashion Design ’93) were nominated for the awards during a virtual announcement on July 12. The Emmys will be presented on September 12.

An Oscar nominee and winner of Primetime Emmys in 2021, 2020, 2018 and 2017, Henighan has gained wide recognition for his expertise in sound editing and mixing on numerous feature films, including the critically acclaimed Black Swan, Deadpool, 13th, and Hidden Figures. In 2019, he received an Oscar nomination for his work on Roma.

Beadle has been nominated in the category of outstanding fantasy/sci-fi costumes for her work as assistant costume designer in Loki. She is known for her work in films and television series, including Vinyl, Conviction and The Runaways, and has worked on music videos with acclaimed artists such as Paul McCartney, David Bowie, Katy Perry and Christina Aguilera. Beadle’s costumes have been featured in the “David Bowie Is” exhibition at Art Gallery Ontario.

“We are extremely proud of Craig, Scott and Carol. The Emmys are an acknowledgement of excellence and a symbol of peer recognition. Our graduates inspire our students to follow in their footsteps and achieve heights of success in their careers,” says Dr. Janet Morrison, Sheridan’s President and Vice Chancellor.

Sheridan’s award-winning alumni from the Faculty of Animation, Arts and Design have a long history of success at the Emmys and in other top awards competitions including the Oscars and Canadian Screen Awards, recognition that inspires our learners and the broader community.