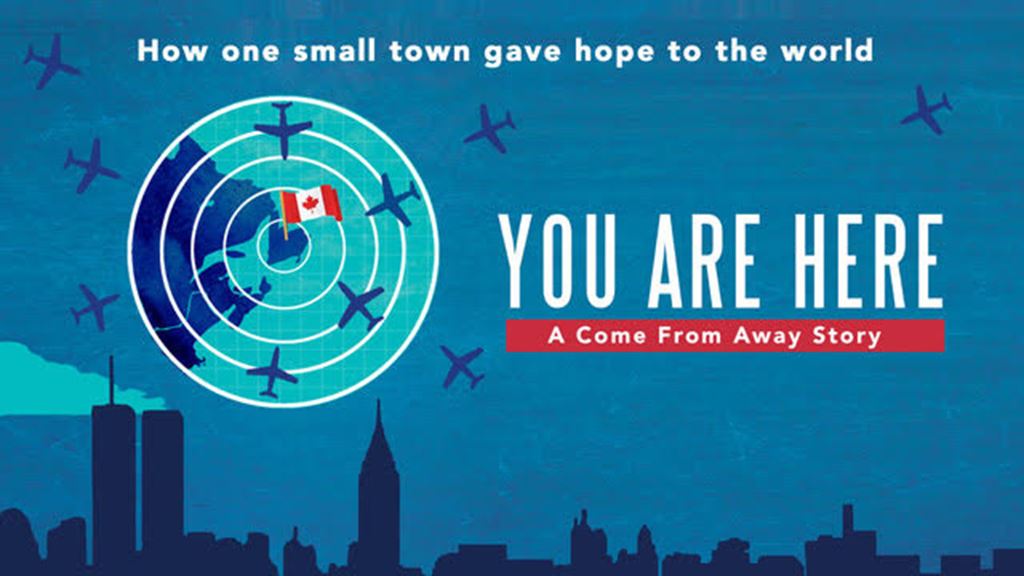 You Are Here: A Come From Away Story will be screened for one night only on September 11 in 800 movie theatres across the U.S. through Fathom Events and will be available for streaming on Crave TV in Canada.

The Banff Media and Canadian Screen Award-winning documentary from M.D.F. Productions Inc. and produced by Peter Gentile, written and directed by Moze Mossanen, and executive produced by Bill House and Peter Gentile, explores the heart-warming story of what transpired when 38 airliners carrying more than 6,500 passengers were forced to land in Gander, Newfoundland, after US airspace was closed on September 11, 2001.

The Sheridan-supported film features many residents and passengers whose lives inspired the Tony Award-winning musical Come From Away, which got its start at Sheridan’s Canadian Music Theatre Project (CMTP) in 2012. Footage of the musical’s earliest days in development at the college is part of this heart-warming documentary.

Michael Rubinoff, CMTP’s Producing Artistic Director, is responsible for bringing the concept for what would become Come From Away to its Canadian composer and lyricist Irene Sankoff and David Hein. “It’s a story of hope that emerged from one of the darkest days,” says Rubinoff. “This film gives audiences the opportunity to hear first-hand from the real people who inspired the beloved characters portrayed on stage.”

Come From Away earned seven Tony nominations in 2017 and won the Tony for Best Direction. As a producer of the musical, Sheridan became the first postsecondary institution in history to receive a Tony nomination. The show recently made history at the Olivier Awards in London, England, winning four awards and becoming the first Canadian show to win the Laurence Olivier Award for Best Musical. Today, five productions of Come From Away are being staged around the world including on Broadway, Toronto, the North American Tour, in Australia and in the UK. A movie based on the musical is also in the works.

Screening ahead of the documentary in theatres will be Bird Brain, a short animated film written and directed by Sheridan animation professor Stephen Barnes, which follows the story of an obsessive scarecrow that discovers true peace of mind when it learns to be more accepting.

“Bird Brain is the result of a wonderful, four-year collaboration that included the talents of many animation students, as well as significant input from faculty and staff in Sheridan’s Faculty of Animation, Arts and Design, and from our industry partners,” says Barnes. “It’s a film that mixes 2D and 3D animation to tell the moving story of a stubborn scarecrow.”

Barnes joins an elite company of Sheridan community members who have had their animated work showcased on the big screen. This past February, Sheridan alumna Domee Shi won the Oscar for Best Animated Short Film for her directorial debut, Bao, which screened ahead of Incredibles 2 in theatres last summer. Sheridan grad, famed animator and Emmy winner Dean DeBlois wrote and directed the hit trilogy How to Train Your Dragon, with the last instalment having launched in February.