At the historic Watkins Glen International raceway in New York on August 4, Sheridan College student Mikayla Bianchin watched as NASCAR driver #88 Alex Bowman took to the track in a helmet she designed. The 18-year-old artist, who is studying in the Bachelor of Illustration program, created a look for Bowman that brings awareness to cystic fibrosis, the progressive disease with which she lives.

The opportunity arose for Bianchin as the winner of the Accelerate the Cure contest, an initiative by CARSTAR, the largest network of collision repair professionals in North America and a long-time supporter of CF initiatives. Anyone in North America who lives with CF or is affected by the disease through a family member or friend was invited to submit a design that illustrates what a cure for CF would mean to them.

Having a special connection to the artistic challenge made it a straightforward yet rewarding design process for Bianchin. “I feel so inspired when I can connect to my art on such a deep level,” she said. “I typically do landscapes and portraits, so I was excited by the uniqueness of this project.” This isn’t the first time Bianchin has been involved in a CF-related project. For many years Bianchin and her family have been advocates with CF Canada, participating in various speaking opportunities and fundraisers.

Roses are commonly used as a symbol for CF so Bianchin incorporated them into the helmet along with a pair of lungs to reflect the organ it predominantly affects, and stylized strands of DNA to show that it’s genetic. Bianchin studied the designs of other NASCAR helmets to gain inspiration. She said: “I wanted it to be fit for a NASCAR race but to stand out in its own way since it’s meant to catch people’s attention for the CF cause.” 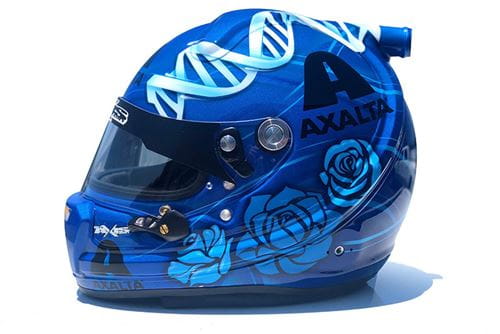 Bianchin chose to draw the lungs and other symbols with light blue tones to depict a feeling of clarity and calm – what she hopes a cure for CF would bring to her and others in the CF community. “I’m determined to live to see the day when there’s a cure,” says Bianchin. “To take a deep breath and not feel pain would be the most beautiful thing.”

In addition to seeing her art unveiled and worn by Bowman at the televised race, which is watched by millions in the U.S., Bianchin rode in a pace car on The Glen track before the main event – a highlight of her weekend experience. “When I was younger, I wanted to be a race car driver,” she said. “While I’m happy to be studying illustration now it was exciting to have that once-in-a-lifetime experience.” What’s more, Bianchin was able to share the excitement of the weekend with her younger sister, who too has CF.

“It means so much to have been a part of the creative and artistic side of a NASCAR event while representing the cystic fibrosis community,” says Bianchin. “Alex rocked the helmet and it was awesome to be there to cheer him on.”

In September, the Binbrook, Ontario native will be returning to Sheridan’s Trafalgar Campus in Oakville to start her second year in the Illustration program with plans to continue her CF advocacy work.

Learn about another artistic collaboration by Bianchin in support of cystic fibrosis awareness.

Sheridan students excel at the Ubisoft Toronto NEXT Challenge