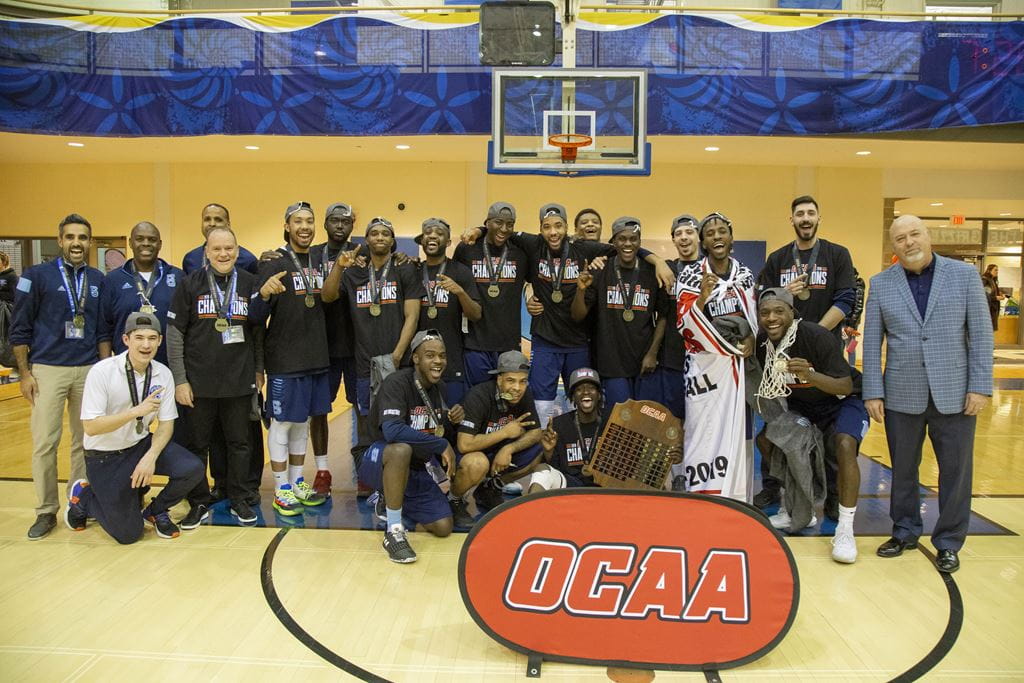 They came into the playoffs as the highest scoring team in the OCAA, but when it mattered most the Sheridan Bruins men's basketball team (30-9, 19-5 OCAA) turned into a lock-down defensive squad, and they rode it all the way to an Ontario Championship, holding Humber to their lowest point total of the season in an 86-70 title game victory.

"As much as any team we've ever had, these guys really took the bull by the horns. In the last four weeks we've had some ups and downs but these guys took the leadership mantel upon themselves and that's what you really need, I believe," head coach Jim Flack said. "You've gotta have a team that could go out there almost without a coach and play. All we have to do then is make substitutions and tactical adjustments and then it's up to them to make the right decisions. The three guys who are captains (Tremaine Anderson, Nick Campbell, and Jemol Edwards) have all won championships before, but this one, they're the leaders and that's what's cool about the tradition of Sheridan basketball."

A back and forth battle all night, the 122nd edition of The Game featured eight ties and 15 lead changes. Late in the third, it seemed as though Humber was starting to take control with a mini 4-0 run that gave them a four-point cushion. They got a stop at the defensive end had a clean look at a 3-pointer that would have extended their lead to seven, but after it missed, the Double Blue closed on a 12-1 run that put them up 61-54 entering the final frame.

In the fourth, the Bruins quickly pushed their advantage to double digits, and with the exception of a point midway through the period where Humber cut it to nine, they would maintain a double figure edge until the game's conclusion.

Kahleek Bakari-Whyte scored a game-high 20, while Jemol Edwards chipped in 17, as both were named tournament All-Stars.

Throughout the OCAA playoffs, the Bruins won each game by double digits and with an average margin of victory at 21.5 points. That was less about offensive explosion, and more about their ability to set a high intensity level and to maintain it for 40 minutes, while covering the entire length and width of the court. They limited three of their four opponents to less than 75 points, while shooting under 40 per cent from the floor.

Blue notes: It's the ninth time head coach Jim Flack has led his club to the top of the Ontario mountain, giving him more titles than any other men's basketball head coach in the 52-year history of the OCAA.

Sheridan students excel at the Ubisoft Toronto NEXT Challenge