Setting up the Centennial Classic

While thousands of Canadians will be watching the Toronto Maple Leafs square off against the Detroit Red Wings, outdoors, on New Year’s Day at The Centennial Classic, it’s quite likely that far fewer of them will stop to think about what it takes to stage an event of this magnitude and complexity.

For Sarah Zeilstra, a professor in Sheridan’s Technical Production for Theatre and Live Events program whose specialization is construction and welding, tackling this challenge stems from a deep-seated passion that’s fueled by resolve and tempered with good humour and collegiality.

I don’t like teaching without doing. I want to reinforce. Technologies and processes change. Every time I go out, I can bring things back to tell my students.” – Sarah Zeilstra

Like many Sheridan professors, Zeilstra strategically keeps one foot in the door, professionally. For the past five years, she’s done freelance work for BaAM Productions as a carpenter/welder and technical installations supervisor. The Toronto-based, event production and management company has staged everything from Toronto’s 2015 PanAm Games, to many editions of the NHL Winter Classic and the Major League Baseball Annual FanFest which has toured convention centres throughout North America for the past quarter century.

“I don’t like teaching without doing. I want to reinforce,” Zeilstra explains. “Technologies and processes change. Every time I go out, I can bring things back to tell my students.”

Her role at the Centennial Classic and the NHL Heritage Classic she just completed in Winnipeg this October, is to oversee the construction of the rink surround – the dasherboards and glass installation. Each panel is eight feet long and needs to be bolted together. About 90 are needed in all, though the exact number depends on the entrances that are determined to suit the configuration for each particular site. “The Centennial Classic will be held in one of the smallest stadiums we’ve ever built in, so different from the one in Foxboro,” where the Bruins played the Habs on New Year’s Day in 2016. “I get to build the ramp for the ice resurfacer too. From start to finish, the whole rink and surround takes about a week.”

“Flexibility and resourcefulness are huge. During the show, I’m on standby to replace the glass if it breaks.” – Sarah Zeilstra

Being close to the lake, there’s also the risk of snowstorms. “Flexibility and resourcefulness are huge. During the show, I’m on standby to replace the glass if it breaks. There’s only minutes to do so, because we’re being broadcast live on TV.”

As one of approximately eight supervisors on site, Zeilstra works with different labour unions, depending on the city she’s in and almost always has to supervise a crew that’s comprised entirely of men and changes in size depending on the task for the day. “It’s always me and the guys,” she laughs. “It’s been that way throughout my career.”

Zeilstra completed a three year degree in scenic construction in the UK. “I liked all the aspects, but the carpentry was really great because it was something different every day.  It was really difficult and I didn’t want it to beat me.  I felt I could get good at it because it was so challenging.” In the program where she teaches at Sheridan, there’s generally a 50-50 split between male and female students, though the upper-year, elective courses with a heavy technology bent tend to attract more men. “It’s important to show students what’s possible. It breaks down barriers right from the start. I hope that the young women who want to take the construction courses see that it’s possible.”

Upon her own graduation, Zeilstra put her skills to use in the performing arts industry in London. “The first big workshop I was involved in 20 years ago had 30 men in the crew. None of them felt they needed a 21-year old woman helping out. But I just kept telling myself, ‘you do need me . . . you’re all going to retire one day’”.

She quickly adopted a strategy of proving herself resourceful – a lesson she tries to hammer into her students today. “On my first job, I worked with welders, carpenters and painters – I wasn’t selective. That’s how I established myself and sent the message that I’d take on any work. Today, I tell my students that if they identify a gap in their own skill set, they should call someone up and offer to job shadow. If you’re there, they might call on you for something else. It’s such a small industry. I still do whatever job needs to be done and I still volunteer. You can’t elevate yourself because you won’t gel with the group.”

“I tell my students that if they identify a gap in their own skill set, they should call someone up and offer to job shadow.” – Sarah Zeilstra

Joining Zeilstra at BMO field, setting up the Centennial Classic, will be one Sheridan alumnus of her program – Garrett Mills, who’s a full time Production Manager at BaAM. “It’s a wonderful company, with great people and that’s important. When you’re on the road building these shows, it’s like being part of a travelling family. You’re with the team 24/7 and you’re all united by a common goal. For me personally, I think it also helps that I don’t know much about hockey or who the famous people are. That’s probably why I can just get on and do my job.” 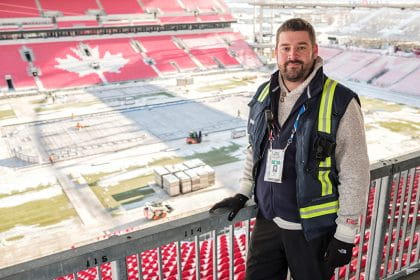 The other great part for Zeilstra is seeing the project come to a close. “I love that once we’re done, everything goes back to turf,” she says.  “You walk in on day one and they start laying the floor, the staging, wood, ice pans, and boards. It’s incredible what we can build. A couple of games and skates later and it all disappears. To see that … wow … it’s like magic.  It’s like we were never here.”