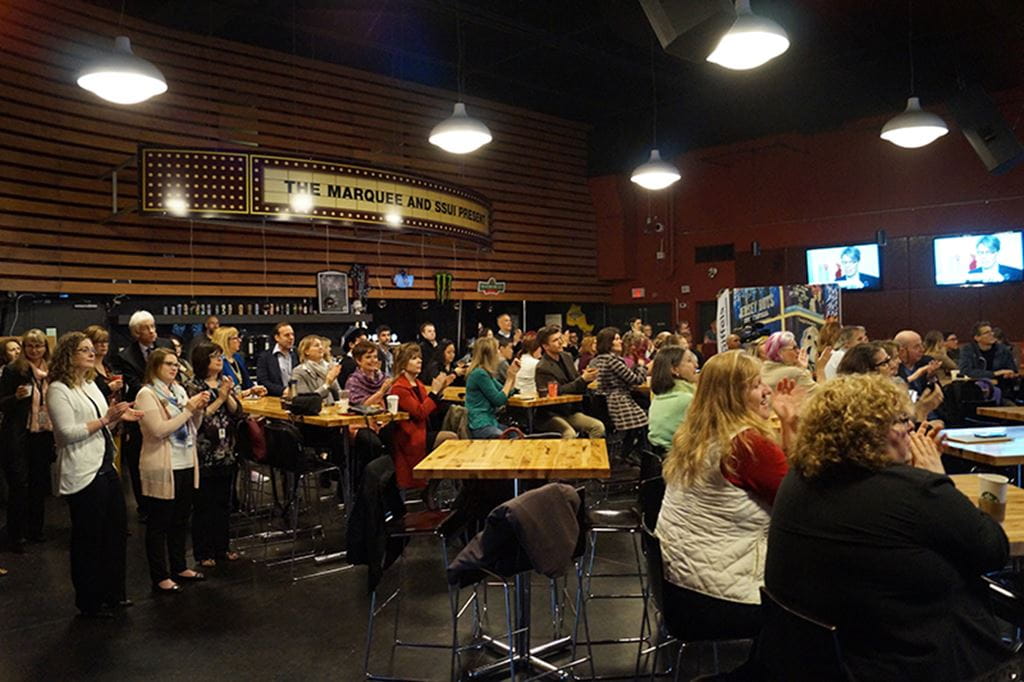 An enthusiastic crowd of staff, students, alumni and friends reacted with raucous applause at the news that Come From Away, the Broadway blockbuster musical that got its start at Sheridan, racked up a total of seven 2017 Tony Award nominations, including one for Best Musical. Other nominations include Best Performance by an Actress in a Featured Role in a Musical (Jenn Colella), Best Book of a Musical (Irene Sankoff and David Hein), Best Original Score - Music and/or Lyrics Written for the Theatre (Irene Sankoff and David Hein), Best Lighting Design of a Musical (Howell Binkley), Best Direction of a Musical (Christopher Ashley) and Best Choreography (Kelly Devine).

The crowd gathered at Sheridan’s Oakville campus, which is home to the Canadian Music Theatre Project (CMTP), the incubator that first developed and produced Come From Away. They were connected by video link with an audience in Gander, Nfld., so that the two communities, each of whom have a connection to the show, could simultaneously tune in to the live broadcast of the Tony Award nominations to learn first-hand if the show would receive a Tony nod.

“With a producing credit on the show, Sheridan is thrilled to be nominated for a Tony Award in the category of Best Musical,” says Dr. Mary Preece, President and Vice Chancellor at Sheridan. “We believe we’re the first post-secondary institution in the history of the Tony Awards (and certainly the only Canadian one) to have a Tony Award nomination for best musical, to our name.” 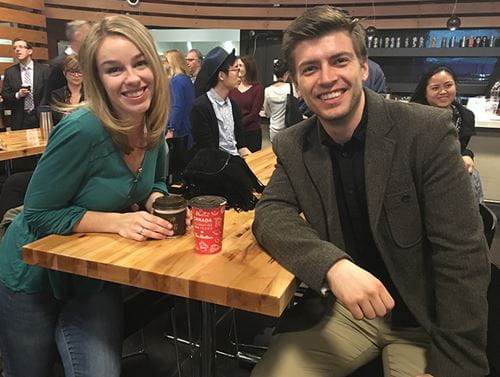 Sheridan’s connection to the new musical is long and deep. Come From Away was first conceived of by Michael Rubinoff, a theatre producer who launched the CMTP at Sheridan in 2011. Rubinoff, who is also the Associate Dean, Visual and Performing Arts at Sheridan, approached Irene Sankoff and David Hein with the challenge of writing a musical about the selfless humanity and compassion shown by the people of Gander and five surrounding towns in welcoming 7,000 stranded passengers on 9/11. He committed that their work would be among the first to be incubated by the CMTP and in 2012, the duo’s script was brought to life by students in the Music Theatre Performance program, culminating in a 45-minute staged reading of the show.

Come From Away returned to Theatre Sheridan in 2013 for a two-week run, as a fully-realized, two act production, featuring Sheridan students in the nascent roles. Further development continued outside of Sheridan before the show was optioned by the U.S.-based Junkyard Dog Productions, who presented it at theatres in San Diego, Seattle, Washington and Toronto’s own Royal Alexandra Theatre prior to its Broadway debut this March. The show will return to Toronto in 2018. Sheridan alumna Susan Dunstan is lending her talent as a standby for the current run.

“Only five Canadian musicals have made it to Broadway. It is very special that our students played a significant role in launching one of these musicals,” says Michael Rubinoff. The CMTP connects writers, lyricists and composers with students who perform their material and bring the characters to life over a five-week period. The process gives creative teams a chance to test, hear and refine their material over a longer period of time, away from critics, so that meaningful development can happen. It can help accelerate the time required to create a new musical. “Our students have received an outstanding education that has facilitated a level of talent and critical thinking that makes them useful to the writers and the development process.”

Since 2011, 15 musicals have been incubated through the CMTP, including Come From Away, The Theory of Relativity, Brantwood (Dora Audience Choice Award for Outstanding Production in 2015), Prom Queen and Marathon of Hope, with four having enjoyed professional premieres, and others in various stages of continued development.

“We’ve long been known for our Music Theatre Performance program, whose alumni have starred on Broadway, at the Stratford and Shaw Festivals, on the Mirvish stage, and at other theatres across the country,” adds Rubinoff. “We can now say that we’re contributing both talent and new work to the canon of musical theatre. I don’t know of any better way of fulfilling our mandate than doing that.”

The Tony Awards will be presented in New York City at Radio City Musical Hall on Sunday, June 11.

Pictured above: Sheridan Musical Theatre alumni Samantha Piper and Adrian Zeyl who helped originate the characters in Come From Away when it was incubated at Sheridan's Canadian Music Theatre Project (CMTP) came to the Tony Award nomination announcement at Sheridan

Pictured at top of page: The Sheridan community gathered in the Marquee at Trafalgar Campus for the Tony Award nomination announcement

Sheridan is formalizing its commitment to breaking down barriers to postsecondary education by officially launching Youth Amplified.