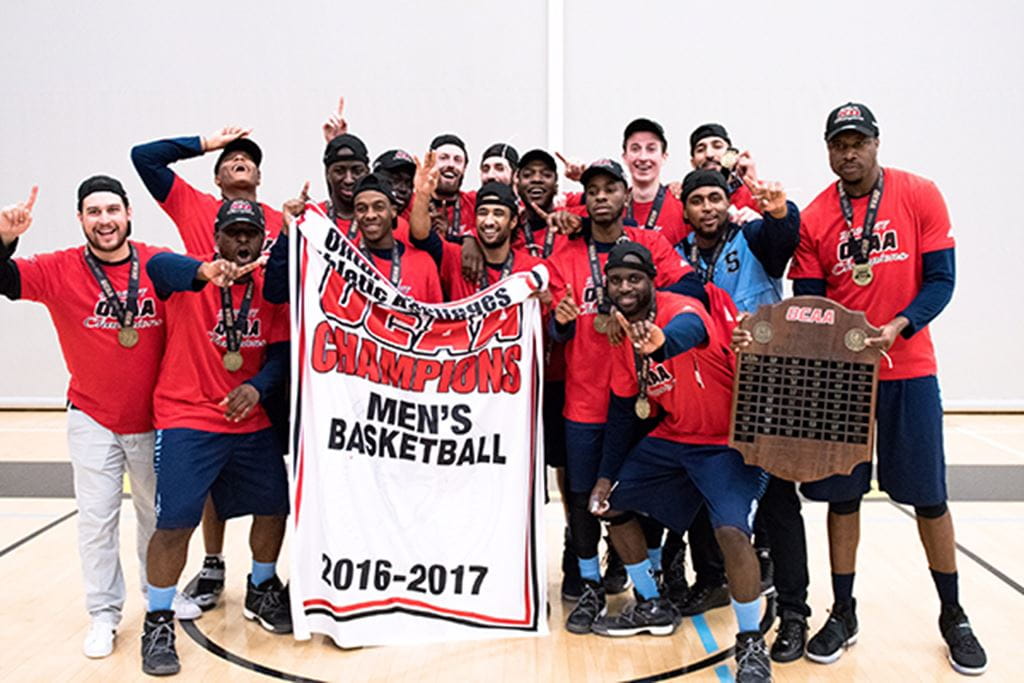 They saw George Brown level the game with just under 10 seconds remaining in regulation, but the Sheridan Bruins men's basketball team (34-3, 19-0 OCAA) returned to the top of the OCAA mountain after Brian Owusu got two cracks at a game-winner, the second of which fell with 0.1 seconds on the clock to lift the Double-Blue to a 76-74 win in the OCAA title game.

"I thought George Brown played an amazing game. They out-worked us for most of the game, they out-hustled and they wanted it really, really badly. Our guys, for whatever reason, just weren't as sharp as they had been the rest of the tournament," assistant coach Nick Davis said. "We got lucky in the end, but I always say you have to be good to get lucky. We worked hard enough that we got a break down the stretch and we accept charity whole heartedly on this team. I feel bad for George Brown to a degree, but I feel way better for us."

It was a sluggish opening half for the Bruins, who trailed 37-35 at the half. They managed to sort out some offensive issues at the break and built a six-point cushion (57-51) going into the final period.

For much of the fourth quarter the Double-Blue were in control, but were unable to completely put away the resilient George Brown side, who actually held a one-point lead in the late stages. With Sheridan clinging to a 74-71 advantage, George Brown's Kevon Mascoe nailed a three-pointer to tie the game at 74 with just under 10 seconds play.  That set the stage for the dramatic finish where Dylan Perian pushed the ball up the floor and passed to Brian Owusu.

Though Owusu missed his first attempt from just in front of the Sheridan bench, he would get another opportunity after Periana was able to collect the offensive rebound and this time he wouldn't miss, delivering Sheridan its 12th OCAA title with 0.1 seconds on the clock.  Periana scored 28 points to lead the Bruins on his way to winning Championship MVP, averaging 24 points in the three games.

Ostap Choliy was the only other Sheridan player in double figures with 13 points.  Both Choliy and Owusu were named tournament All-Stars.

The Bruins, who are currently ranked first in the country, will be competing at the Canadian Collegiate Athletic Association (CCAA) national championships being held March 15-18 at Holland College in  PEI.

They had just under 14 hours to recover from the disappointment of being knocked from title contention, but the Sheridan Bruins men's basketball team (33-6, 18-3 OCAA) managed to dig deep and won a pair of games in eight hours to win the national bronze medal.

Being given all they could handle in a game against home squad Quest, played in the middle of an electric atmosphere, the Sheridan Bruins men's basketball (31-5, 18-3, OCAA) endured down the stretch and will advance to the national semi-final after Trevor Williams' three-pointer with 6.5 seconds remaining lifted them to an 87-84 triumph.