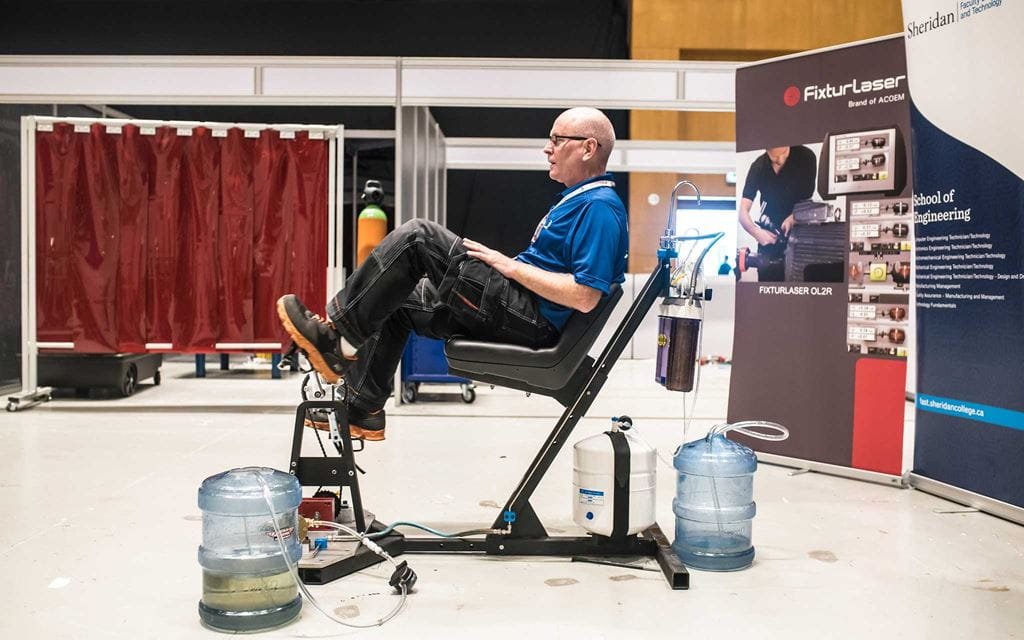 While stationary bikes and ellipticals are being delivered to households across North America, a far more valuable bike developed by students and faculty in Sheridan’s Magna School for the Skilled Trades (MSST) and School of Mechanical and Electrical Engineering Technology (MEET) is making its way to Asia.

At its final destination, the water bike will be put on display as part of the innovative new WorldSkills Museum, scheduled to open in September 2021. The collection – a curation of objects and stories that illustrate WorldSkills’ evolution – will aim to tell the unique journey of an organization and movement that has changed the lives of young people over the past 60 years.

The water bike has life-changing capabilities, too. It’s made to be used in parts of the world where electricity supplies are unreliable or non-existent. At approximately 30 r.p.m, the pump produces one litre of clean water a minute, with an expected output of 100 gallons a day if run continuously.

So what was the catalyst for such a revolutionary bike to be developed at Sheridan?

The wheels were set in motion in 2017 when Craig Brazil, professor and coordinator of the Industrial Mechanical Millwright (IMM) program, along with Simon Heathcote, Lab Manager in the Faculty of Applied Science and Technology (FAST), took a leading role at that year’s WorldSkills competition in Abu Dhabi.

The WorldSkills competition takes place every two years at different locations around the world, featuring over 1,600 competitors taking part in various vocations and skilled trades competitions. Participants take a grueling route to reach the event, succeeding at regional, territorial and national competitions before earning the right to represent their country on the world stage.

IMM competitors that year were tasked with building a pedal-powered water purification system for developing countries. The water bike prototype was designed and built in Sheridan’s workshops under the direction of Heathcote and Brazil, who also serves as the IMM Skill Competition Manager.

“Access to clean drinking water has been a major challenge of the 21st century. The water bike is representative of the potential that skills, and young skilled workers, have when working together to solve global problems.” - Craig Brazil, IMM program coordinator and Simon Heathcote, FAST Lab Manager.

They worked in collaboration with four student members from Sheridan’s MEET, as well as apprentices and postsecondary students from the MSST.

“This was the first time a collaborative project had taken place on this scale between the Schools of Skilled Trades and Mechanical Engineering,” says Brazil. “And we were proud to have the opportunity to showcase a project from our own workshops on the world stage.”

At the competition, the bike drew on all the skills associated with the IMM trade, including machining, welding, fabrication, precision alignment, layout and precision hand work. Brazil oversaw the daily schedules for the competitors as well as the final marking of their work.

The project proved to be such success that WorldSkills donated the prototype to the United Nations Industrial Development Organization (UNIDO). The seven pedal-powered purification systems built at the end of the competition were also sent to UNIDO’s Learning and Knowledge Development Facility for an ongoing program addressing the scarce water resources in Morocco.

Four years later, the purification system is set to become one of the cornerstones of the newly built WorkdSkills Museum. 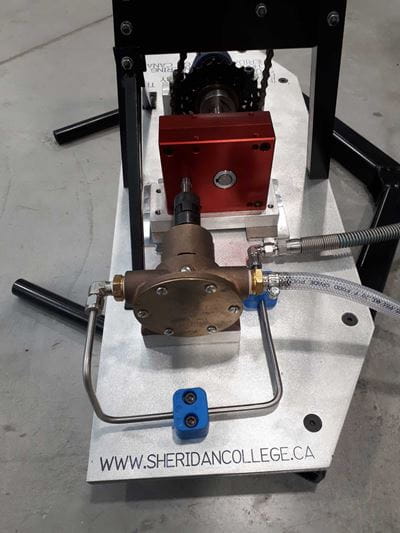 Although COVID-19 restrictions will inhibit visitors to physically visit the museum after its September opening, an accompanying virtual exhibition will tell the story of the growth of WorldSkills over the past 60 years, including some of the global challenges that have been addressed in the competitions.

“Access to clean drinking water has been a major challenge of the 21st century,” explains Brazil and Heathcote. “The water bike is representative of the potential that skills, and young skilled workers, have when working together to solve global problems.”

At Sheridan, the water bike represented the beginning of an ongoing collaboration between skilled trades programs and MEET to design and build test projects for future WorldSkills competitions.

“During the 2017 competition, the water bike put Sheridan on a world stage and highlighted the outstanding work of the engineering and skilled trades students,” says Heathcote. “To see this spotlight continue, and be recognized as a cornerstone of WorldSkills in the future, is a testament to the exceptional efforts by all involved in the project.”

The WorldSkills Museum will open in Shanghai in September 2021 to mark the 60th anniversary of the WorldSkills Competition. Learn more about the museum here.