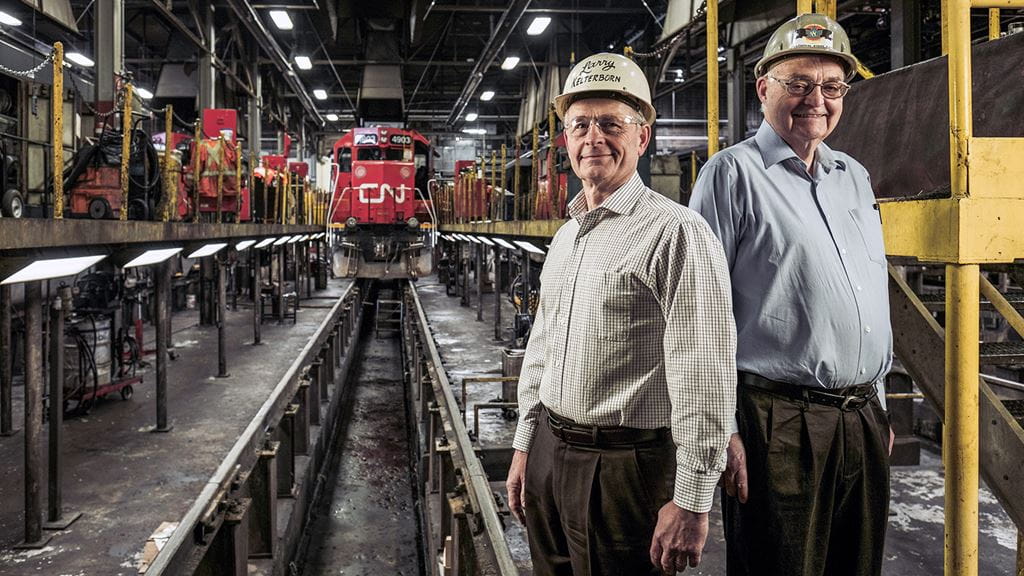 Jim Forbes and Larry Kelterborn have dedicated their lives to improving rail travel, from the heavy-haul freight cars gliding across the Prairies, to the commuter trains criss-crossing suburbs. Before his retirement in 2016, Forbes was the Chief Design Engineer for National Steel Car in Hamilton. He dedicated his career to working on innovations like rail cars that can load transport truck trailers, and those specially designed to move potash. Kelterborn, meanwhile, ran his own engineering consulting firm that, over 25 years, worked on rail safety in Canada and internationally. The pair first met as students in Sheridan’s Mechanical Engineering Technology program back in 1968, when Ontario’s colleges were a brand new place to get a hands-on education.

Forbes was drawn to the college because he loved working on cars during his teenage years. He was grateful for the chance to get a practical education at Sheridan. “If I had been 10 years older, and graduated in 1958, I, and a million other young people in this province, basically had nowhere to go. The colleges were a godsend to millions of young people because they gave them the opportunity to pursue postsecondary education.” Kelterborn remembers hearing a guidance counsellor tell him about a new college opening up in an old high school in Brampton. He thought he’d give it a try. “I wanted to go beyond high school. I was interested in working with my hands and doing mechanical things,” he recalls.

“If I had been 10 years older, and graduated in 1958, I, and a million other young people in this province, basically had nowhere to go. The colleges were a godsend to millions of young people because they gave them the opportunity to pursue postsecondary education.” - Jim Forbes

Since those beginnings, they’ve accomplished a lot. They both graduated in 1971, and their time at Sheridan spurred their interest in learning. They encouraged each other to go on to earn graduate degrees in engineering while advancing their careers. Their legacy can inspire today’s students to pursue a practical approach to learning that is mixed with the critical thinking skills essential to innovate in the 21st century. 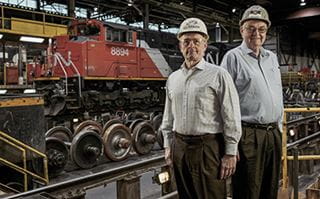 Forbes credits Sheridan with getting him interested in engineering, and giving him the work ethic and study skills needed to pursue further education. In the 1970s and early 1980s, he began designing nuclear steam generators at Babcock and Wilcox. In the late-1980s he earned his PhD in engineering from the University of Waterloo and began his 30-year career at National Steel Car. During his time there, he contributed to more than 100 patents on rail technology that aim to make rail cars more efficient, and safe. He says his Sheridan education, and his graduate studies, helped him merge his understanding of the practical technology in his field with the pure science behind it.

Kelterborn’s time at Sheridan also equipped him for success. He completed his master's in engineering in 1980 at the University of Waterloo. He found what he had learned in college gave him his pick of co-op positions in university, because he already had experience in design. After a stint working on railway projects at Dofasco, he decided to set off on his own. For 25 years, he ran his own engineering consulting firm, advising on rail safety regulations in Canada, the United States and internationally. He, or a member of his team, often travelled to derailment sites to investigate and make safety recommendations.  He continues that work today. He’s a member of the Technical Advisory Board of the International High Speed Association, based in Tokyo, Japan, and the Railway Safety Advisory committee in the United States. He recently brought both those experiences together when he consulted on a project to bring Japanese technology to a high-speed railway in Texas. He admits there’s a temptation to retire, but he continues to be drawn to an industry where he’s making an impact. He believes today’s students will also have the chance to put their education towards careers that make a difference.