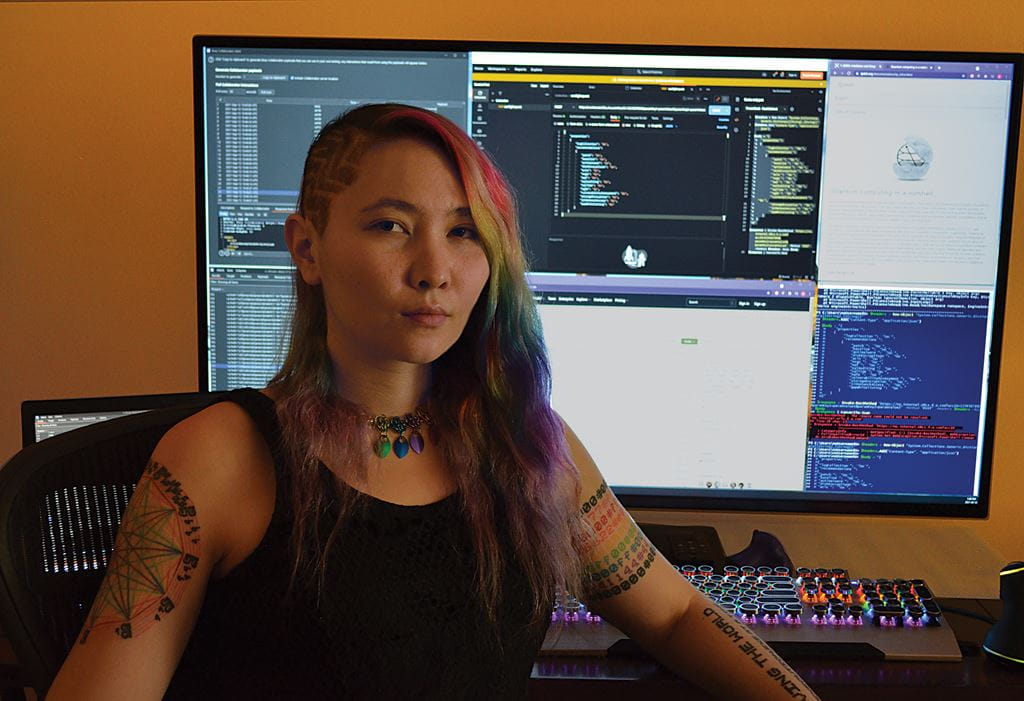 In the gold rush of cybersecurity

Alana Staszczyszyn (Bachelor of Information Systems and Security ’19) says her job is a bit like being a character in a video game – one where she gets to break through firewalls, demolish codes and disarm highly protected networks. But her work is no game. It’s real life, and not only does she get paid for playing the outlaw, she has the law on her side. There’s a cherry on the cake too: she works in a sector with zero per cent unemployment rate and over 3.5-million vacancies worldwide, last counted.

Staszczyszyn is a cybersecurity specialist whose work as a Penetration Tester with Security Compass allows her to use her skills for good, ensuring data security. As an ethical hacker, she helps businesses shore up their cyber defences, to expose gaps in the security systems of computer networks, cloud servers, mobile devices, and payment software. She analyzes where these risks are and develops strategies to prevent breaches. Staszczyszyn is in a job which, it’s often said, is for “good people with the ability to do bad things.”

“Cybersecurity as a market has exploded over the last two years. A lot of organizations have transitioned to remote systems and they are looking for talent to help make this new work-from-home paradigm succeed.”

“What I do specifically is called penetration testing. It's a subset of ‘offensive security’ and basically, it requires you to emulate an attacker trying to break into something,” she explains. “I am given a system to consult on – what in layman’s terms, we would call ‘hacking’ – and I have to find ways of evading all the checks that have been built to secure that system. Essentially, it's almost like a video game that you get dropped into. It is very challenging and I’m constantly learning something new.”

It’s hard work that keeps the adrenalin pumping, requiring her to always be on her toes in the fast-paced cyberworld.

Staszczyszyn has an impressive resume for a tech buff, but she started out as the artsy one, having graduated from the prestigious Etobicoke School of the Arts before joining Sheridan’s Bachelor of Information Systems and Security program, which had a coveted co-op component. She says of the transition: “I've always been interested in maths and sciences. I had been attracted to Sheridan for its arts programs because of my background in the arts. When I started looking for programs in information technology and found Sheridan offered one, it was the natural choice for me,” she says.

Staszczyszyn says she has never regretted her decision to take up cybersecurity. Different as they may appear to be, both cybersecurity and the arts provide an opportunity for creativity, she says. The increased role of technology in all aspects of life has opened up a tremendous space for innovation and creativity.

“In the first couple of years at Sheridan, we were taught the business language of security. I think this set me apart from other candidates when I applied for jobs because I knew the actual vocabulary used in cybersecurity.”

For three years in a row during her program at Sheridan, she found a paid, part-time position as a security officer at the Health Shared Services Ontario, a part of Ontario Health. In her final year, she shifted to Security Compass, where she continued to work full time after graduation in 2019. She has been working in the organization ever since, and has been featured in many leading publications, including the Globe And Mail and the CBC, as a leading cybersecurity expert and a woman working in a traditionally male-dominated bastion.

“In the first couple of years at Sheridan, we were taught the business language of security. I think this set me apart from other candidates when I applied for jobs because I knew the actual vocabulary used in cybersecurity. I was able to communicate what businesses needed from a security perspective to succeed,” she says.

Staszczyszyn was on the cusp of an internet acceleration when she graduated in 2019. The COVID-19 pandemic forced a socially distanced world to heavily rely on the internet for communication, business, and its very survival. Malicious hackers followed the trail of online transactions and digital transfer of sensitive information, resulting in an increase in cybercrimes such as identity theft, phishing and ransomware. Soon, every business, big or small, was looking for help from cybersecurity specialists such as Staszczyszyn to plug the loopholes and keep their online operations safe.

“Cybersecurity as a market has exploded over the last two years. A lot of organizations have transitioned to remote systems and they are looking for talent to help make this new work-from-home paradigm succeed. That brings in tons of security work, and not only in my field of offensive security but in lots of other areas too,” she says.

That’s led to a rush to fill in vacant positions in cybersecurity, and Staszczyszyn says she is constantly getting asked for advice by many who are keen to join the sector, including professionals from other fields. It’s also got Staszczyszyn thinking about what comes next.

“The cybersecurity field itself is expanding and now I'm venturing into what security looks like in quantum computing,” she says. “There is a lot of opportunity to create a new generation of computers without the glitches that make our current ones vulnerable to security threats.”