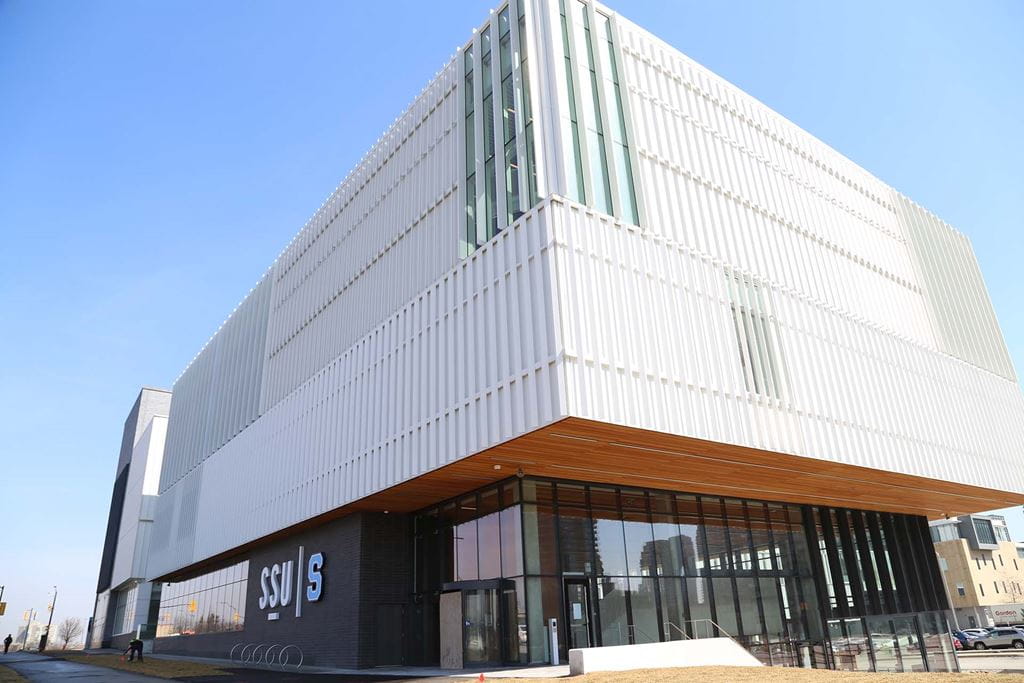 A five-storey recreation and athletics hub for students, by students, with a former student managing the $43-million project – the Hazel McCallion Campus Student Centre is the newest kid on the block at Sheridan, and it’s a tribute to the imagination and creativity of its student community.

The brand-new building, developed by the Sheridan Student Union in partnership with Sheridan College and Sheridan Athletics, offers fun and relaxation to students taking a break away from lectures, labs and curriculum. It is also a hangout zone for those with time on their hands in between classes. While a soft launch for the Student Centre is planned for May, its Athletic Facility is now open for all Sheridan students and staff with current memberships, and appointments can be booked for the gym and weight room. The building is expected to be fully operational in September.

“The project started with a survey in 2016 which asked students what it was they’d like to see on campus. So basically, the entire building was planned by students,” says Sheridan graduate and Project Manager of the Student Centre, Lucas Laurenssen (Architectural Technology ’10). For over five years, Laurenssen has been working to bring those aspirations alive, and he is proud to have played a key role in providing the student community with many of the amenities he remembers longing for as a student.

“It is unreal to see it all built up now. It was definitely a challenge, if not scary, when we started the process. But having gone all the way, to have seen a whole building constructed in front of me, it's really amazing. Each floor of this building is completely different. It's not at all like a cookie-cutter, academic building,” says Laurenssen of this latest addition to the skyline of Mississauga, which proudly displays the iconic SSU and Sheridan Athletics logos on its exterior.

“The project started with a survey in 2016 which asked students what it was they’d like to see on campus. So basically, the entire building was planned by students.”

At the centre of the 71,000 square foot space is an all-white lounge with a cathedral ceiling and tall sliding glass doors which flood the space with natural light. The lounge has both a coffee station and a full-service bar that flows seamlessly into the sitting area. For sports and fitness enthusiasts, there’s a double-height gym with a sparkling basketball court; exercise rooms with state-of-the-art cardio and weight equipment; studio space for yoga classes and dance; and an elevated running track in the Bruins’ signature double blue wraps around the fourth floor.

Those looking for nooks and corners to catch up on assignments can find a ‘quiet’ lobby on the second floor. Plush sofas, trendy barstools and tables are strewn around the entire building which offers spectacular city views beyond its glass panels. A fully equipped house kitchen and a tuck-shop take care of food and snacks, and well-appointed SSU offices, with ping-pong tables in the waiting area, are ready to welcome students.

“We’ve used Douglas fir ceilings throughout the space to give it a warm, natural look. In the survey, the students said they wanted a place that felt like a home away from home, and the natural wood ceilings help in creating that effect,” Laurenssen says.

The new building shares all of HMC’s environmental sustainability features, such as rainwater management, cooling tower water use, advanced energy metering, storage and collection of recyclables, indoor water use reduction, and a building automation system that continuously controls and monitors temperature and humidity while conserving energy.

The project was to have been completed in 2019 but due to the pandemic and resultant delays in construction, it overshot the opening date by three years. Tough as that experience was, Laurenssen says the team rolled with the punches.

“We had to shut down the site right in the middle of construction, which wasn’t great. And once work resumed, it took time to get things back on track. The sub-trades took almost six to nine weeks to get into a flow again,” Laurenssen says. Also, throughout the pandemic, factories were working at 25 to 50 per cent of their capacity, causing material shortages for the project.

As Project Manager, it was Laurenssen’s responsibility to keep an eye on the schedule, the project budget and the scope of work throughout the building process. “Working through the pandemic was a challenge for everyone. While the contractor was fully responsible for the health and safety of the workers on site, everyone was doing their part in ensuring that work was being done safely. Definitely, it made the process a little longer, but we persevered,” Laurenssen says.

Laurenssen’s involvement with the HMC Campus goes back to his student days when he did three co-ops in Sheridan’s Facilities Department. “As a student, you're always seeing these new buildings go up, or renovations happening on campus, and you're just curious to know who’s doing all that. That's why I was really intrigued with Facilities. I did three co-ops in the department and I loved it,” he says.

“I started out as a student at Sheridan’s Davis Campus and it is as if I never left. There’s that feeling that I’m not coming here just to work, that I’m here to also learn.”

He worked briefly for an architectural firm after graduation, but soon returned to the Facilities Department as an intern around the time HMC A-Wing was getting ready to open in 2011. “I got to actually go on site, help out the project manager with any tasks that needed to be done, did some space planning for offices throughout the building, and also gave tours. So I have a bit of a legacy with HMC,” he says. In 2016, when an opportunity arose to work on the project for the HMC Student Centre, Laurenssen readily took it up.

“I started out as a student at Sheridan’s Davis Campus and it is as if I never left. There’s that feeling that I’m not coming here just to work, that I’m here to also learn. I actually get to be on campus and understand how students are using technology nowadays, how they use different spaces, how they gather and move through the campus. Living in these situations and experiencing them really helps with design and planning, and everything that goes into projects such as the Student Centre,” Laurenssen says.

At the moment, he just can’t wait to see students walking into the new building. “Right now, I do feel very proud about the project and all of the effort that went into it, but when students walk into the building, that’s when I’ll be really happy,” he says.