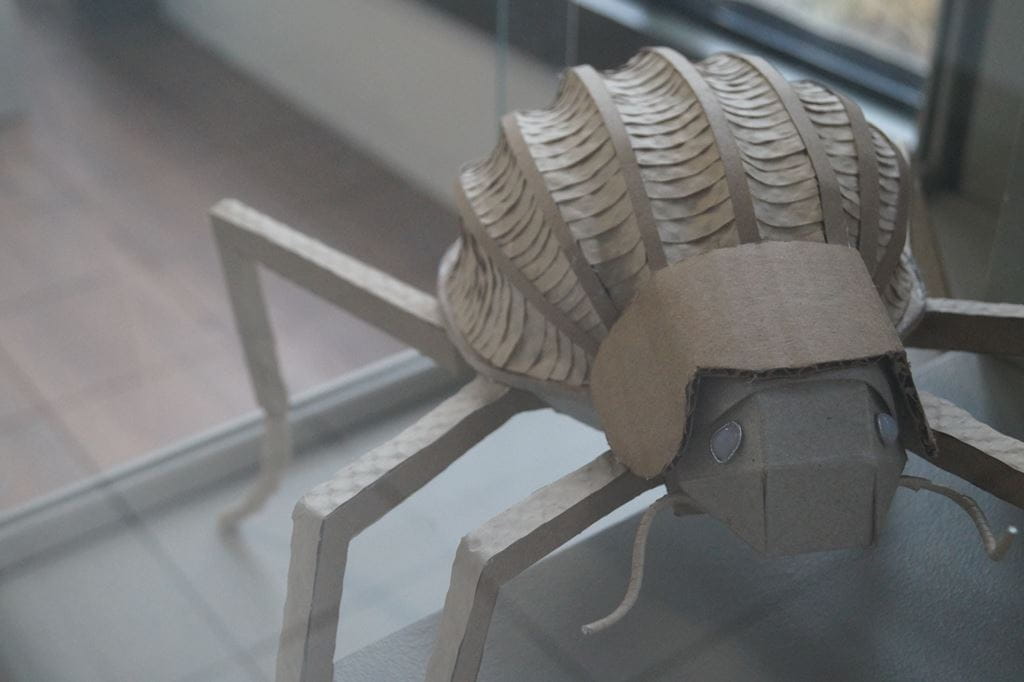 Putting the art in arthropod

Year round, the Cambridge Butterfly Conservatory is home to thousands of free-flying butterflies, a variety of tropical birds and hundreds of dry-mounted insect species. In the month of March 2019, its team welcomed a new exhibit that features the work of 25 Sheridan Art Fundamentals students. Arthropods – invertebrate animals like insects, arachnids, myriapods and crustaceans – are its focus, born out of a class assignment titled: Don’t Bug Me: Insects, Bugs and Entomology in 3D Design. 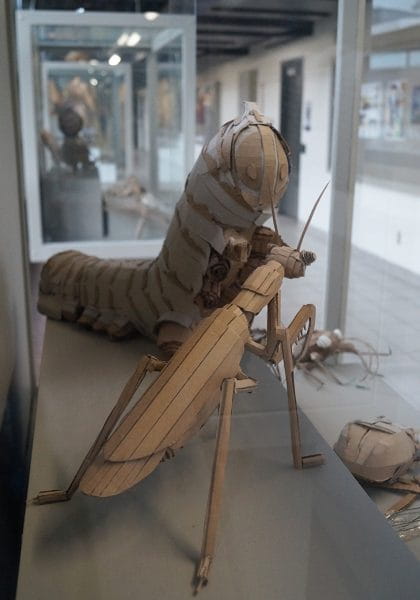 Professors Susan Beniston, Kristin Mesley and Virginia Di Ruscio teach in the one-year Art Fundamentals program, which helps students gain practical skills while discovering their artistic strengths and preferences. They put forward the assignment to challenge students to think in 3D form while using only basic building materials: cardboard, paper, wire and glue. The sculptures had to be free-standing and show gesture or action to give the appearance of life.

Student Maxine Kryzaniwsky was inspired to create a Namib Desert beetle (pictured at top of page) after seeing one in a nature documentary. “To drink water, it climbs up to the top of a sand dune in the morning sun, does a head stand and funnels water droplets down its back into its mouth,” she explains. “I found this fascinating and was intrigued by the beetle’s form and proportions.” She approached her sculpture by analyzing photographs online, drawing various sketches and boiling down its complex structure into more basic geometric forms. Some of her sculpture’s finer details include its water-collecting back ridges, which she made from layers of overlapped paper, paper clips as leg joints and patterned cardboard cut-outs to capture the texture of its belly.

Kirsten MacDougall chose to recreate the emperor moth. Using a technique called quilling – curling paper and positioning it on its side – she captured the ornate quality of their distinctive, broad wings. Fringed brown paper covering its legs and body created an illusion of fur. “This assignment was an opportunity to develop my skills in visualizing characters at different angles, whether two- or three-dimensional,” says MacDougall, who aspires to enter Sheridan’s Animation program and plans to use this piece to bolster her portfolio. 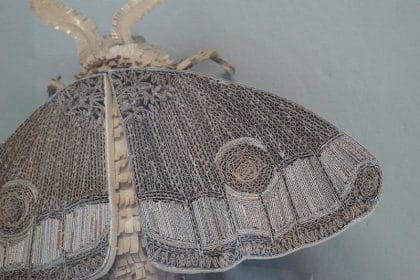 The beetle, moth and 23 other Sheridan sculptures found their way to Cambridge, Ontario after a Conservatory employee studying in Sheridan’s Early Childhood Education program, noticed the creatures lining a corridor on campus. Word got back to the Conservatory Curator, Adrienne Brewster, who then visited the campus in the fall of 2018 to check out the student work.

“Insects inspire people all the time in their artistic endeavours. We try to represent them not just in nature and biology but in how they’re perceived by people in all facets of life.” – Adrienne Brewster, Curator of the Cambridge Butterfly Conservatory

“I was so impressed at the diversity of the arthropods students chose to create for the assignment,” says Brewster, who has a background in entomology. “I can see there were careful considerations made in each design to aim for anatomical correctness.” Hosting student work at the Conservatory aligns with its mandate to foster the public’s appreciation for insects. And art has a special place in achieving this, explains Brewster. “Insects inspire people all the time in their artistic endeavours. We try to represent them not just in nature and biology but in how they’re perceived by people in all facets of life.” 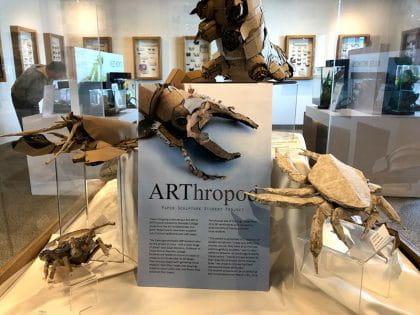 When Kryzaniwsky and MacDougall got word that their sculptures had been selected for the Conservatory exhibit, they felt honoured. “It’s really cool to think about this collection of work inspiring creativity in kids (and hopefully adults alike) and showing the potential of an ordinary and accessible material like cardboard,” says Kryzaniwsky. “The opportunity to ignite a curiosity in others is a humbling experience to me.”

Each sculpture has its own placard with the student’s name and that of the arthropod species, giving many students their first public exposure as an artist. The Conservatory expects approximately 30,000 people to come through its doors in the month of March – one of its busiest times of the year.

ARThropod is on display at the Cambridge Butterfly Conservatory until March 31, 2019. Visit the Conservatory website for more information. In addition to Maxine Kryzaniwsky and Kirsten MacDougall, the art of the following Sheridan students will appear in the exhibit: