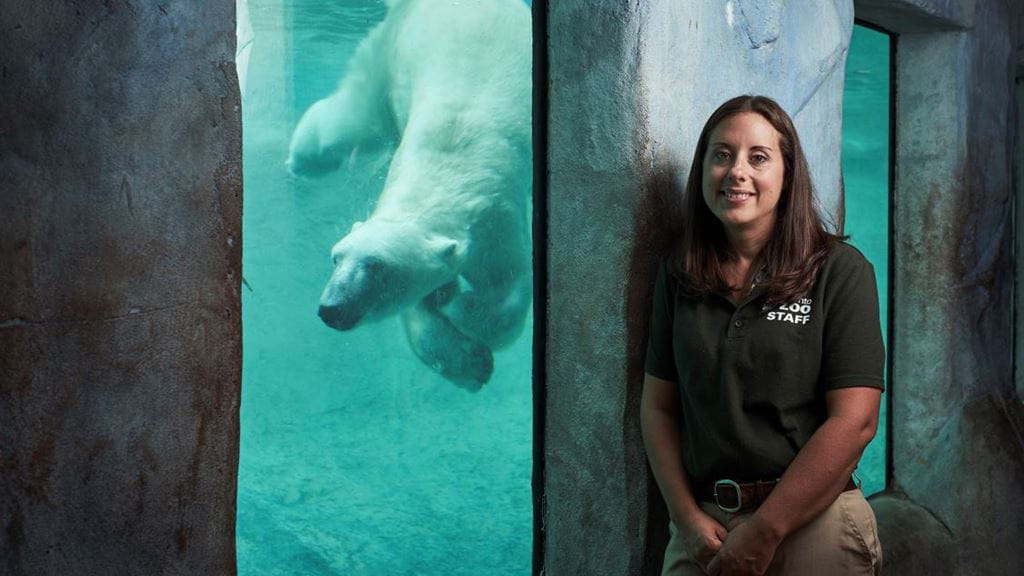 Polar bears are among the world’s largest carnivores that live on land, with the average male standing approximately 11 feet tall and weighing between 800 and 1,300 pounds.

Their astounding size makes it that much more compelling when one of them  — a bear named Hudson — presents his paw to zookeeper Amy Goswell through an enrichment wall at the Toronto Zoo’s Polar Bear Habitat. The simple gesture, which resembles a high five, is a regular occurrence, allowing keepers to check the pads of his feet.

“He’s always smelling my hair, too,” laughs Goswell as she crouches beside Hudson.

Goswell has worked as a zookeeper with the Toronto Zoo since she first graduated from Sheridan’s Animal Care program in 2008. During that time, she’s worked in multiple areas for the zoo, cared for dozens of animals, and even once helped escort a 15-month-old polar bear cub named Juno from Toronto to Winnipeg. 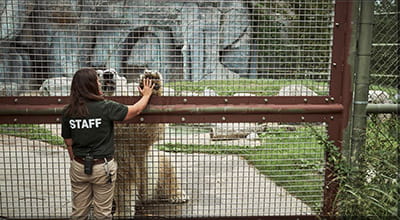 In March of 2017, Goswell was part of the team that helped crate Juno at the Toronto Zoo, load her onto a FedEx cargo plane, fly with her to Winnipeg, and help her acclimate to the other polar bears at Winnipeg’s Assiniboine Park Zoo.

Travel isn’t usually required of Goswell in her role as a zookeeper. Working with exotic animals, however, is par for the course. Along with the other animals that live in the Toronto Zoo’s Tundra Trek area — Arctic wolves, snowy owls, and reindeer, to name a few — Goswell works closely with polar bears every day.

This hands-on, day-to-day interaction with the animals is not only Goswell’s favourite aspect of working at the Zoo — it was the reason she pursued the career in the first place.

“A zookeeper’s heart is in their work. It’s not just a job — it’s a lifestyle.”

Although Goswell briefly considered becoming an exotic veterinarian, she realized fairly early on that zookeeping was her calling.

After obtaining a degree in zoology, Goswell went on to attend Sheridan’s Animal Care program, working at the Toronto Zoo during the summer. She was hired by the Zoo after graduation, beginning in its Discovery and Outreach area, which are home to the Kids Zoo and daily Waterside Theatre Animal Shows. Since then, she’s also gained experience in the African Rainforest Pavilion, the Canadian Domain, and the Americas Pavilion.

“There are a lot of keepers that have been here since the 1980s,” Goswell says. “They’ve been able to retire for 10 years now, but they’re still here. A zookeeper’s heart is in their work. It’s not just a job — it’s a lifestyle.”

Every morning, Goswell checks on all the animals under her purview. She’ll then clean the exhibits, check the fence lines, change the animals’ water, and make sure the viewing windows that give visitors a peek at the bears’ graceful swims are clean for visitors.

Having such a trusting relationship means the keepers are able to take better care of the animals. All polar bears are trained for voluntary blood draws, and if they need to be sedated for a medical procedure, the bears have been trained to receive injections.

Part and parcel with that coaching is a focus on positive reinforcement — animals never have to take part in an activity if they are unwilling. “The animals can participate in training, or they can leave,” Goswell says. “We never force an animal into a training session.”

Goswell is just as at ease with the families and guests of the zoo as she is with animals.

Every day, she participates in a 15-minute “Meet the Keepers” session at the Polar Bear Exhibit, giving her the opportunity to teach visitors a bit more about the animals they’re observing.

“The animals aren’t here to entertain people — they’re here to be ambassadors for their wild counterparts. We hope people are inspired to then help polar bears in the wild.”

The zoo also coordinates training demonstrations, where visitors are able to get up close and personal with the exhibits, watching as the trainers feed the animals and showcase some of their more unique traits. These sessions are essential to another key component of Goswell’s job as a zookeeper: education.

While the Toronto Zoo is a family-friendly place that promotes fun and adventure, it’s also about giving visitors a better understanding of the world they live in and the other animals that inhabit it.

At Goswell’s “Meet the Keepers” sessions, she talks about the challenges that polar bears face in the wild, and the positive impact humans can have by lowering their carbon footprints. Polar bears are opportunistic hunters, finding their food by looking for holes in the ice and waiting for seals to pop up for air. Due to climate change, ice is forming later and melting earlier, leading the window of opportunity for bears to hunt is become much smaller.

“The animals aren’t here to entertain people — they’re here to be ambassadors for their wild counterparts,” explains Goswell. “We hope people are inspired to then help polar bears in the wild.”