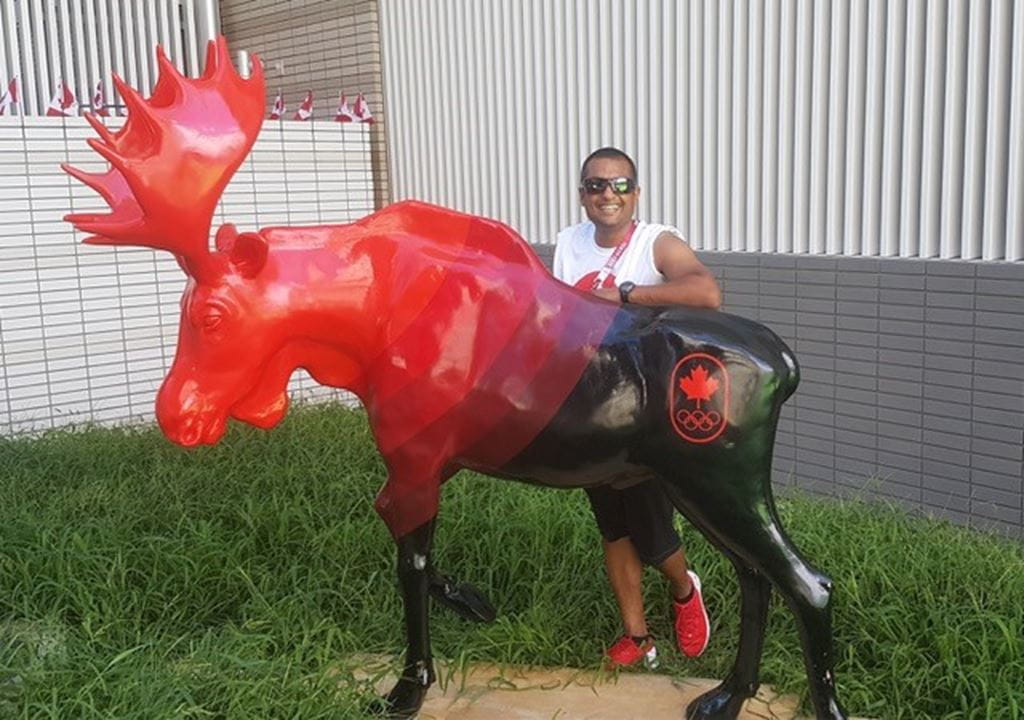 One of my goals as a student in Sheridan’s Sports Injury Management program was to work at the Olympic Games as an athletic therapist. The determination to be associated with the Olympics, and to be on top of my game as one of the best in the field of athletic therapy, was my driving force through the program. I’ve been fortunate that since my graduation in 2003, I’ve been to four consecutive Olympics as a therapist for the Canadian wrestling team. I had just turned 30 when I went to my first Olympics at Beijing in 2008. This was followed by London in 2012, Rio in 2016, and the recent 2020 Tokyo Olympics.

Before Beijing, I got my first break at the international level within four years of graduation when I accompanied the Canadian wrestling team to the 2007 Pan American Games. I was also on the medical team for the 2010 Commonwealth Games. It can be intimidating to be a young practitioner at these sporting events, where the world’s best athletes compete to win medals for their countries. The games are dominated by extremely experienced professionals in all disciplines, including athletic therapy, but the strong schooling I received at Sheridan motivated me to persevere and give of my best.

It is an extraordinary honor to accompany world-renowned athletes to the Olympics, and to be trusted to have the skills and training to help them maximize their performance. Our Tokyo team comprised defending champion Erica Wiebe, who won gold at the Rio Olympics, Amar Dhesi, Danielle Lappage, and Jordan Steen. I was one of the two athletic therapists with the team, the other being Max Hanna from Montreal.

“It is an extraordinary honor to accompany world-renowned athletes to the Olympics, and to be trusted to have the skills and training to help them maximize their performance.”

At the Olympics, our job requires us to be on the sidelines with our athletes, to work with them before, during and after their games. Most of the athletes are fairly healthy, having been cared for by their home therapists across the country. They don’t have a lot of injuries coming in and if they do, we try to take care of those. Much of the work we do at the Olympics relates to maintenance treatments. We also spend quite a bit of our time in taking care of the psychological well-being of our athletes, making sure that they stay comfortable. It is important for our athletes to have familiar faces around them, and to be with people who help them feel relaxed, motivated and free from stress.

The hardest part of our job is often at the beginning of the training camp when injuries or tight muscles show up during practice and need to be taken care of. Our training camp in Japan was in the Mie Prefecture, in a beautiful, quiet city on the outskirts of Tokyo where we stayed in a hotel for 12 days in the lead-up to the Games. We chose not to have a training camp in Tokyo because our team prefers to stay away from the Games city until just before the actual competition. We’ve done this at three Olympics – Beijing, London, and now Tokyo. It helps to keep the team away from unnecessary distractions such as the media hype that’s inevitable in the host city. Of the four Olympics that I have been to, the team stayed at the Olympic Village only once, in Rio.

The Tokyo Olympics were unlike any other due to the lack of spectators and the strict COVID safety protocols that we had to follow. We couldn’t just step out of our hotel or the sports centre in Mie and go for a walk. We had no interaction with the local population and there were no guests other than us on our hotel floor. We had an elevator dedicated to our team and nobody could join us for our meals in the restaurants. We also had a bus just for us, to take the team back and forth between the hotel and the sports stadium, where we were the only team practicing in the arena. We couldn’t do any of the touristy things, like go to the beach which was near our hotel. I believe we were the only Olympic team camping in that town.

We were isolated, but the team acclimatized to this very quickly due to our standard practice of staying away from the excitement of a host city during big games. We received amazing hospitality, the food was great, and we had a team of six persons looking after us 24/7.

“The games are dominated by extremely experienced professionals in all disciplines, including athletic therapy, but the strong schooling I received at Sheridan motivated me to persevere and give of my best.”

Every morning, we had to complete a COVID spit test before eating or drinking. After breakfast, we would head to the sports stadium in our bus and the wrestlers would practice. Fortunately, they were in fairly good health, and didn’t require as much therapy as they did in previous years. It was a very focused training camp where we could hone our skill sets before heading for the main stage in Tokyo.

Just before the actual competition, our team shifted to a hotel across the competition venue in Tokyo. As expected, though we were in a private hotel and away from the Olympic Village, we were still not allowed to go out and couldn’t leave the hotel except to go directly to the venue. The regulations were strict, and some of the teams who tried to go out in the city and relax were sent home by the organizers. Though it would have been nice to see Tokyo, we were very focused on the job in hand, which was to ensure the health of our athletes.

“I wanted to become the best, and I took courses to improve and to learn. It is not enough to just have the basic skill set: you must do more to be the best.”

Unfortunately, our team didn’t succeed in winning a medal despite giving their best performance. This was the first time over the last four Olympics that our wrestlers didn’t score a medal.

Learning to be the best

It is a unique experience to be with these athletes who have dedicated their lives to their sport. Only a very small number of athletes get to make it to the Olympics, and it is a pretty neat thing to be an athletic therapist and help an Olympian optimize their performance. I'm very fortunate and very lucky to be with the wrestling team. The athletes have been very good to me, and I look forward to many more years with them.

I had a BSc in Kinesiology from the University of Waterloo before I joined Sheridan’s Sports Injury program. After my graduation, I returned to Sheridan to teach athletic therapy for nearly 10 years. I’ve seen that students who set goals for themselves succeed in their careers. Cheesy as it may sound, you need to fall in love with what you do. You also have to continually improve on what you know and give it your one hundred percent. I wanted to become the best, and I took courses to improve and to learn. It is not enough to just have the basic skill set: you must do more to be the best.

I continue to take workshops and attend conferences to find out what’s new out there, what’s cutting edge. The thing with therapy, as with all medical science, is that we can’t be stagnant. We need to continuously further our knowledge to become better at what we do.

(As told to Vitusha Oberoi)