Mike Hicks was hired as a newly-minted graduate of Sheridan’s Computer Science Technology program in 2001 by Intelex Technologies. One of seven employees at the time, Hicks is now Chief Technology Officer at the 375-person company which has amassed a long list of awards, including seven appearances on Deloitte’s list of North America’s 500 fastest growing tech firms.

Perhaps his role as a senior technology executive is not a surprising landing place for Hicks who started programming computers when he was eight years old, and building and selling them out of the basement of his parents’ Scarborough, Ontario home by the time he was in high school. 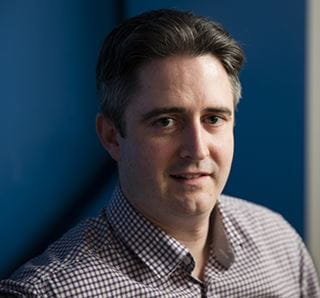 Based in Toronto, Intelex Technologies is a leading global provider of cloud-based Environmental, Health, Safety and Quality management software. “This is a great industry to be in now,” says Hicks.  “We have an admirable mission at Intelex, which is to make the world a better place.  Our products help companies improve the quality of their products, reduce their impact on the environment and improve the safety of their employees.”

For his part, Hicks particularly enjoys the IT challenges that different companies bring to the table. “Give me a problem and I want to find a solution.” With more than 1,000 clients and a million users, that’s a lot of problem-solving.

This roll-up-your-sleeves mentality is just what Hicks looks for when building his own team.  “We certainly need people who have the right technological skills but those who do well here are also able to think creatively and solve problems,” says Hicks who has found these qualities in Sheridan grads, many of whom work at Intelex.

In the earlier stages of his career at the company, “the challenge was to build software that was flexible enough for our users to adapt to their needs, instead of telling companies that their process had to fit into our software.”

Health and safety remains one of Intelex’s key areas of focus, according to Hicks. The future of the industry lies in helping companies not only track and help prevent health and safety incidences but in predicting potential future issues by analyzing and changing behaviours within organizations, particularly those with a large number of employees in high-risk, high-stress jobs.

“Give me a problem and I want to find a solution. Those who do well here are able to think creatively and solve problems.” - Mike Hicks

Although Hicks calls Intelex’s technology platform “the best in the space”, he reserves special praise for the company’s corporate culture. Intelex has racked up a long list of accolades, including best workplace and most admired culture awards. Special perks like bring your dog to work day, free breakfasts, paid gym memberships and regular company outings are some of the reasons for the ongoing recognition.

“We still have a family feel and we don’t want that to change when we become a 1,000-person organization,” says Hicks. A tall order, given the company’s rapid growth, but one he is confident he and his colleagues are prepared to meet.