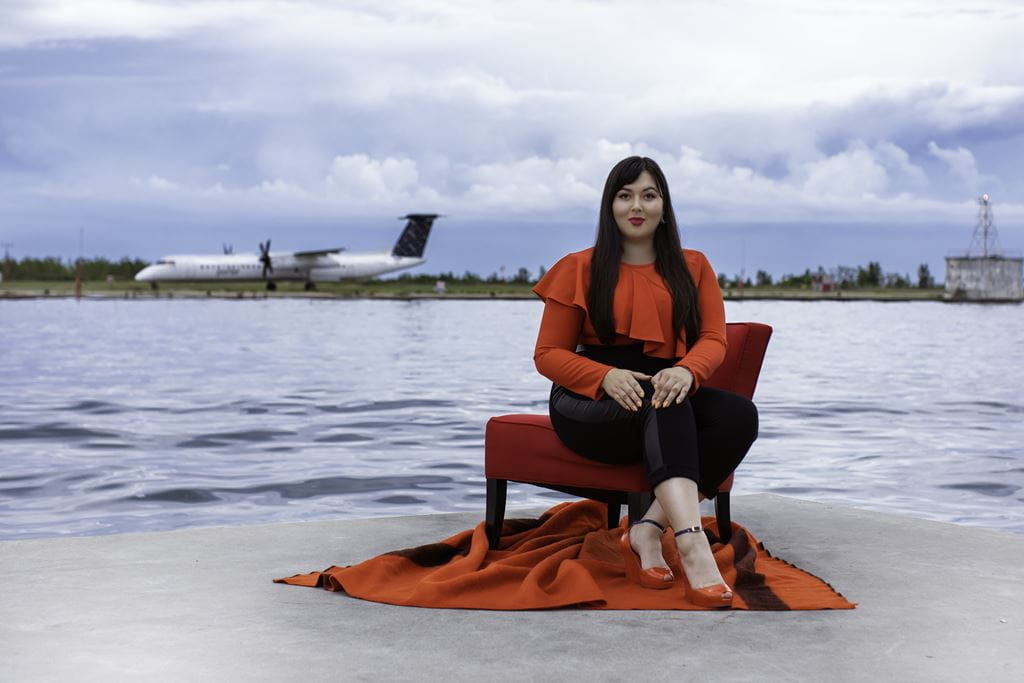 How Lesley Hampton tackles representation on the runway

When Lesley Hampton settled in on Sunday evening to watch the 2020 Golden Globes, she had a very different experience than the rest of viewers tuning in to watch the star-studded event. For the first time ever, the emerging fashion designer was able to see one of her own custom gowns grace the red carpet.

The dress, worn by CTV etalk anchor Lainey Lui, captured the attention of publicists, staffers, and even a few celebrities. Comedian Tiffany Haddish and Karamo of Netflix’s Queer Eye’s Karamo were among the stars to comment on Hampton’s piece, and Lui was featured on best dressed lists including Vogue, Buzzfeed and The Telegraph. However, beyond the accolades and social media mentions, Hampton is most proud to have the opportunity to showcase authentic Indigenous representation on a main stage.

Since launching her womenswear line just three years ago, the 25-year-old Anishinaabe and Mohawk fashion designer has made it a mission to promote diversity and inclusivity in her runway presentations, with collections tackling themes such as mental health, body positivity, and Indigenous representation.

Her rise through the industry has been meteoric She launched her self-titled company the first week into starting her studies in fashion design, and an early show for Vancouver Fashion Week three months later landed her in British Vogue. Another jump came when reality star Kim Kardashian shared her fall/winter 2017 collection on social media because it featured Adrianne Haslet – a survivor of the Boston Marathon bombing – wearing a dress that showed her prosthetic leg.

When Hampton’s fall/winter 2019 collection hit the runway in early 2019, it was the first time a Toronto Fashion Week show had featured a cast of all-Indigenous models in more than a decade. And her follow-up in September, a collection about mental health awareness, was dedicated to the memory of missing and murdered Indigenous women and girls, and 2SLGBTQQIA people. 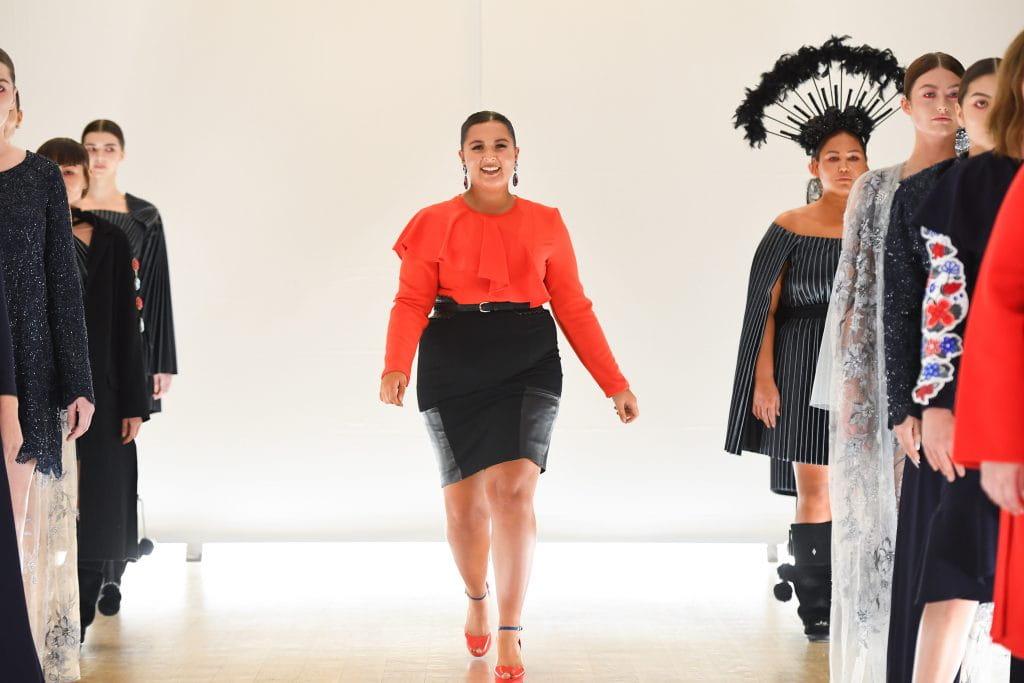 Hampton’s commitment to diversity and inclusivity is, in part, because growing up, she couldn’t see herself reflected in the fashion industry. Today, Hampton has carved out her own space. Here, we chat with Hampton about the launch of her company and the inspiration for her collections:

When did you first become interested in fashion?
Growing up, I would watch Fashion Television on Saturday mornings instead of cartoons. I was always interested in fashion, but it always seemed like one kind of body type and environment – I never thought I’d be able to fit into that mould.

My great aunt taught me to sew, and there was always a craft room in my house because my mom was very much into quilting and showing me how to do different crafts. Plus, my afterschool programs were all sewing classes. So fashion and sewing were always relevant to my life, but I never thought it more until I matured a bit and could see a bit clearer how to fit it into my future.

I traveled a lot while I was growing up, and when I came back to Canada, I just chose a program I was interested in at the school that was closest to my parents. I loved art, and the art history classes at Sheridan were so important in building my conceptual basis around what art is. The sculpture classes at Sheridan motivated me to look more closely into a career in fashion…I would always end up doing a wearable sculpture, or sculpture work related to the body. After Sheridan, I went to George Brown College and got my fashion design education, and it just took off from there. 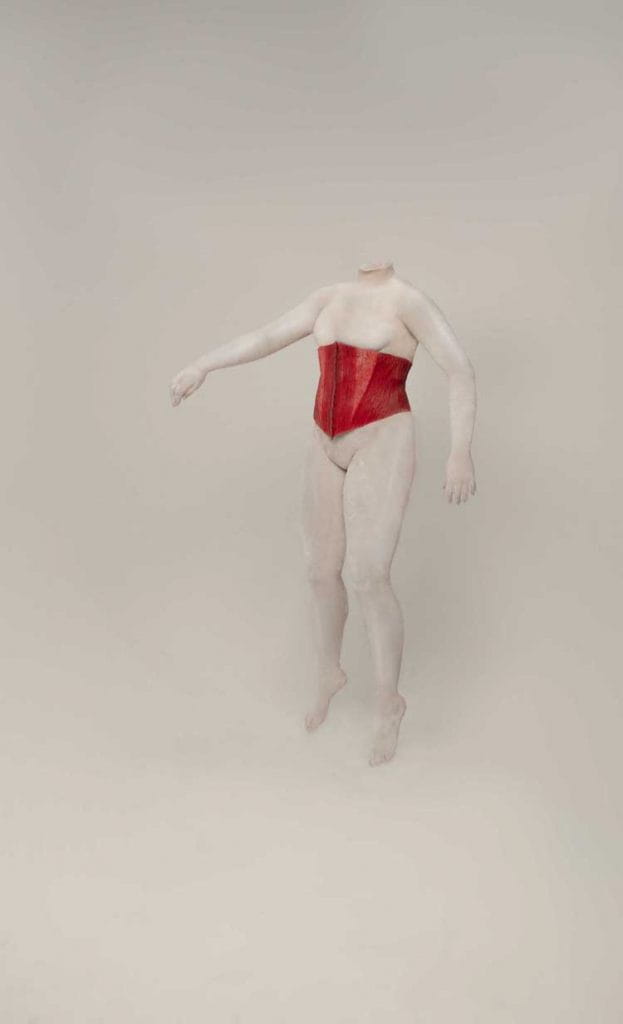 What was the first item you designed?
Honestly, probably a pair of PJ pants I made during one of my after school programs when I was a kid. I wore them for like 10 years.

Did you always intend to start your own business?
I think so.  I developed such a strong conceptual basis for my art that working under someone else wouldn’t have made sense for me. I have such a clear kind of vision of what I want to say, and I consider almost every collection or every piece I do to be more of a wearable of art than just fashion. Right after Sheridan, I was doing shows with my wearable art pieces in smaller clubs around Toronto, and was beginning to develop my vision as a designer. And I started my brand the first week I was at George Brown, where I studied fashion. There was no lag time. I was very eager to begin.

When you first started the Lesley Hampton brand, what did you want it to be about?
The notion of inclusivity was always prominent. Initially, I thought it wasn’t something I needed to push within the band – I thought people would recognize it organically. Then I realized that I needed to state my mandate [bluntly] so people would understand my brand’s viewpoint. You have to say that you’re a body positive brand so people know that you have that ethos, especially in high fashion, where other brands often only go up to a size 8 or 10.

I applied those ideas to the brand right from the beginning, along with incorporation Indigeneity into my designs. Having grown up internationally, it was only when I came back to Canada that I really discovered what it meant to be Indigenous in the current Canadian landscape. I needed to begin a personal journey of self-discovery to define what I thought my Indigeneity to be.

But then, through research and discovery, and through creating additional work, I figured out that all my work is Indigenous fashion because I am Indigenous, and my work is influenced by my Indigenous background. It is, because I am.

I think it’s really interesting to be able to showcase to everyone what authentic Indigenous representation looks like, and then be able to continue those conversations around appropriation and what’s not okay to be celebrated. 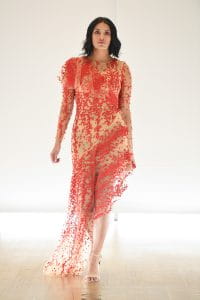 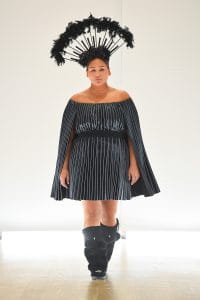 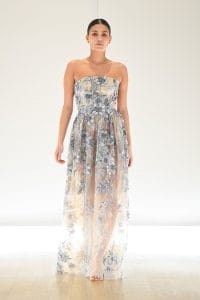 Your collections have tackled a lot of heavy themes. Why is that important to you?
I think these themes are so important to be discussed within the lens of fashion because so many people are a part of the industry. Whether it be the people attending a runway show, the models, or the entire backstage team, lots of people can be affected by the themes that are being discussed in the collections.

For example, for my collection that was mainly focused on mental health, we cast a full range of mental health advocates. They were cast based on their minds as opposed to their bodies or their waist measurements. So just by looking at models in a different way, and deciding who we wanted to represent our work, it was very uplifting to all the models who were in the show, and to the audience, who could kind of see and understand that concept.

Because there’s so many eyes on the fashion industry, those concepts will later trickle down to the media industry. I think heavier topics need to be explained and discussed so that people feel less segregated. 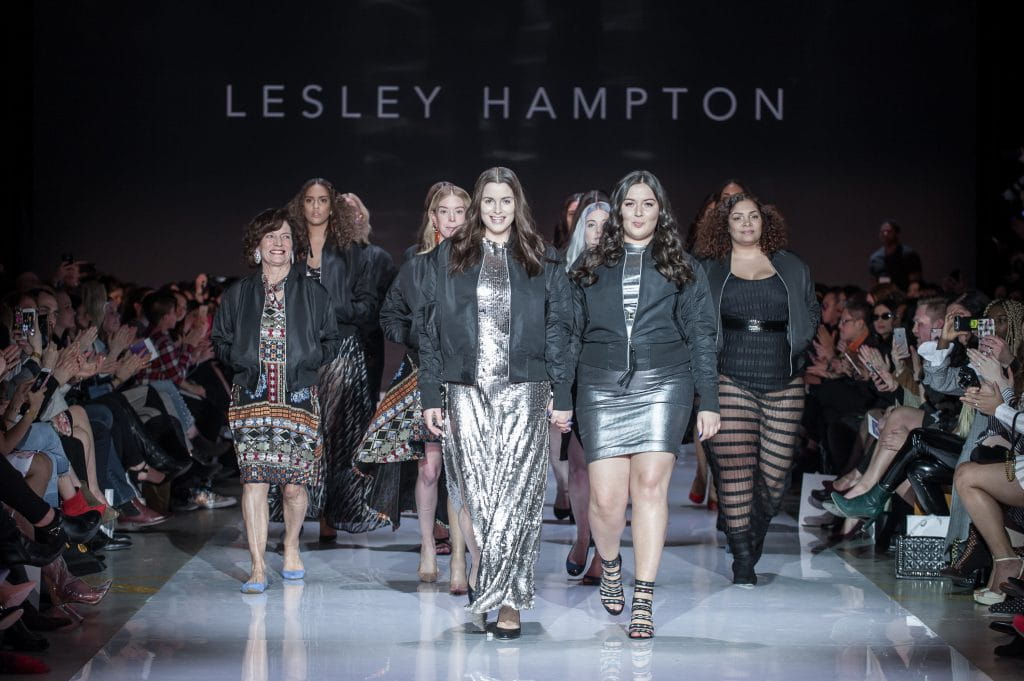 Hampton’s Fall/Winter 2018 collection, Lithium, was inspired by the courage it takes to speak up about mental health.

What was your “I made it” moment?
I remember after the show ended for my collection created for mental health awareness. There was so much emotion that happened backstage after the show. I broke down crying because it was such an emotional show for me, and then all the models who followed me off stage had the same exact feeling. It was a huge step for the fashion industry, and personally for each model because they never thought they’d be able to walk the runway in a Fashion Week because of a variety of reasons…whether it be their skin colour, height, body size, body shape or ability. It was amazing to feel like I was making a difference in those people’s lives, even it was just for a 10-minute runway show. It made me feel like I was doing something more real than just creating dresses.

What’s your favourite fashion trend at the moment?
I love how the fashion trends are going towards more towards sustainability and people are leaning against fast fashion. They want to find the longevity in their pieces and are purchasing things yearly rather than every month. I think it’s going to be interesting to see people start buying pieces as investments, not just because they’re trends.

Is there anyone you’d love to dress?
[Supermodel] Ashley Graham would be a goal for me.

Do you have a mandate or life motto you live by?
It’s a bit generic, but I would say my motto for the brand would be to live authentically. From an entrepreneurship standpoint, don’t be afraid to say no or change your mind about something and go in a different direction. If your gut is telling you what’s best for you, follow it.

This interview has been condensed for brevity and clarity.