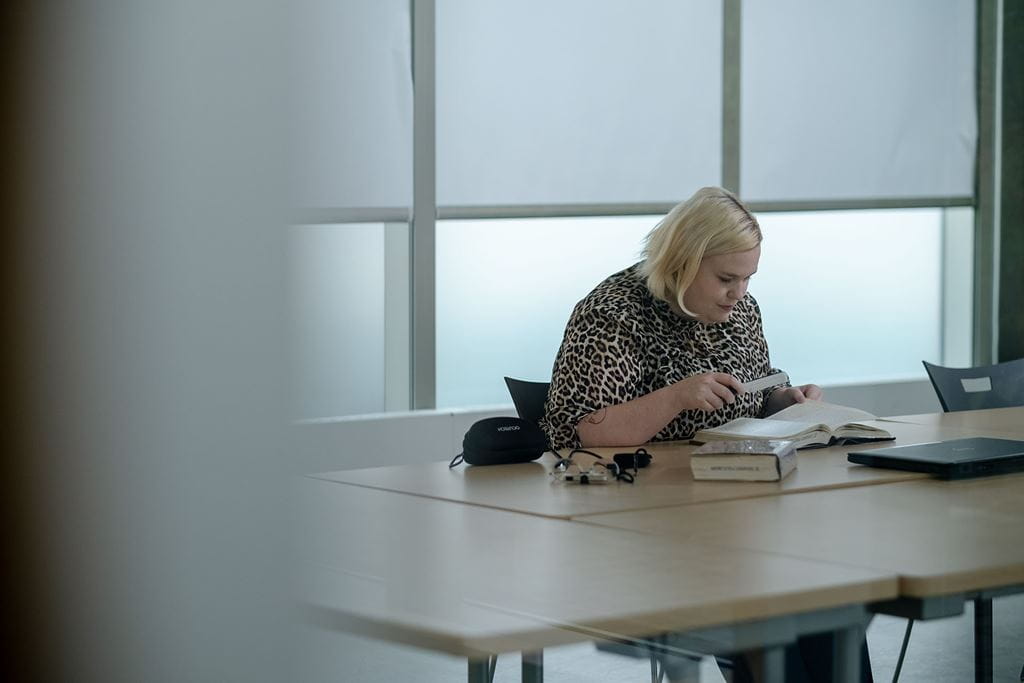 A profile in courage: Alumna helps others despite vision loss

For Victoria Saucier (Investigations – Public and Private ’19), the world is forever enveloped in a haze, even when the sun is out in all its brilliance. Saucier is legally blind, having lost her vision while she was still a student at Sheridan five years ago. Despite that, not only has she successfully navigated the challenges that came her way due to her vision loss, she is now helping others who are in a similar situation.

Saucier works at the Canadian National Institute for the Blind (CNIB) as a Bilingual Customer Care Specialist and offers advice and guidance to those who are blind or partially sighted. “I'm so happy to be able to provide assistance to people who are in the same situation that I have been in. Blindness is a spectrum, so not everyone who has a blindness issue or vision loss will have the same condition as me, but I can certainly relate to them,” Saucier says.

Saucier was in her first year at Sheridan when she developed a juvenile form of macular degeneration. Over the course of one year, her condition worsened to the extent that she was declared legally blind after having lost her central vision. Among the many things she had to give up, the loss of her driving licence was the one that hurt her the most. It signaled her dependence on others due to her physical disability.

Overcoming barriers to help others

However, instead of giving in, Saucier met life head on. She worked hard to secure excellent grades and completed two of her program placements with the Sheridan Security team. Once her studies were complete, she was hired by the Sheridan Security Department at the Davis Campus, till she returned to school to pursue Bachelor of Applied Science and Justice Studies at the University of Guelph-Humber.

“I had to change my career plans, but I like the path that I've taken despite the vision loss that I faced. Now I work at CNIB and I love it. I love helping people in my situation and I wouldn't go back in time and change that,” she says.

On International Women’s Day in Ottawa, first-year Honours Bachelor of Film and Television student Julianna Corso took a seat in the…