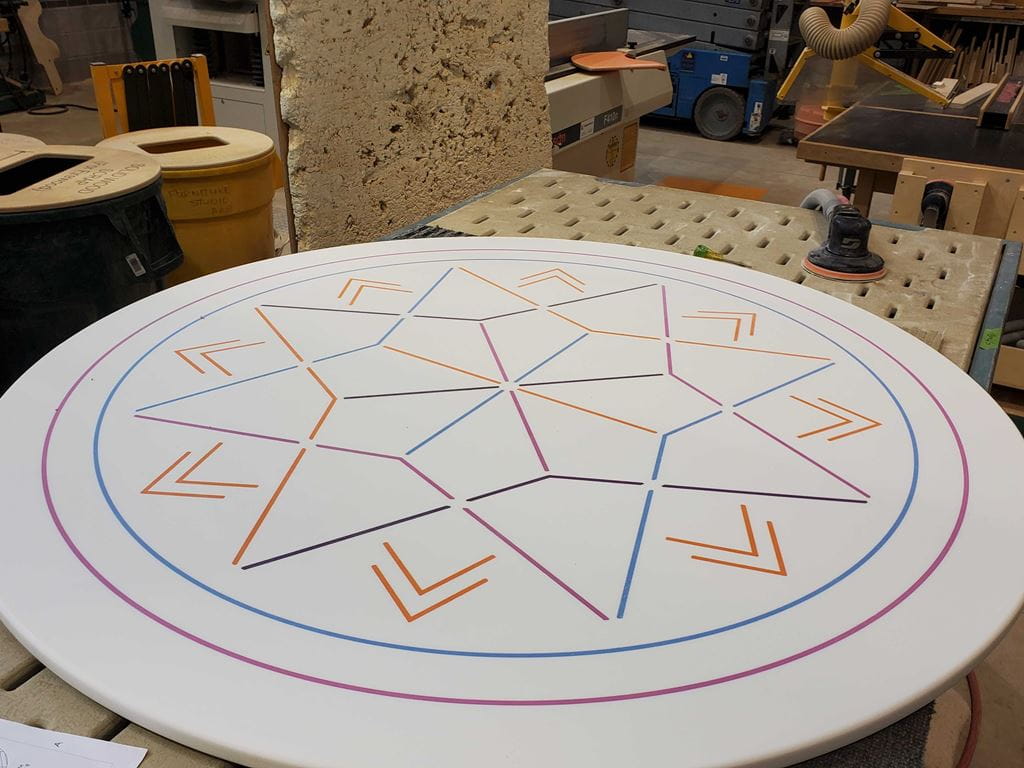 Although Thunder Bay has one of the highest proportions of Indigenous people among major Canadian cities, that fact isn’t necessarily reflected in some of the community’s infrastructure and services.

“All institutions that exist here are occupying the traditional territory of the Anishinaabe, but many aren't centering the voices or the needs of the Anishinaabe people or Métis people,” says Samantha Martin-Bird, the former Thunder Bay Public Library (TBPL) community hub librarian for Indigenous relationships. “It’s hard to speak broadly, but I would say in general in Thunder Bay, that’s an issue.”

"The most important part of design is being empathic, and empathy starts with listening." — Codesign project facilitator Connie Chisholm

Those voices and needs, however, were at the centre of a partnership between the TBPL, members of Thunder Bay’s Indigenous community, social enterprise Codesign and faculty and students from Sheridan’s Honours Bachelor of Craft and Design (Furniture) degree program that saw participants collaboratively design and create furniture specifically for Indigenous library patrons. Sheridan furniture studio head Peter Fleming, graduate David Lewis and Codesign project facilitator Connie Chisholm recently installed a collection of custom-built birch tables, bookshelves, children’s stools, a large coffee table with matching benches and a lectern in the Indigenous Knowledge Centre (IKC) of the TBPL’s Brodie Street branch — marking the completion of a project that was delayed more than a year by the COVID-19 pandemic and fulfilling the promise that the Furniture program had made to the library and community.

“This is a real milestone for our program,” Fleming says. “It sometimes felt like we’d never get here. Emotionally, it’s really significant for all of us.”

Making the library more welcoming and familiar for Indigenous patrons

Three years ago, the TBPL introduced IKCs at each of its four branches as a visual representation of its commitment to provide learning materials and resources on Indigenous Peoples in Canadian history, treaties, residential school legacy records and information written by Indigenous curators. Content in the IKCs was also sorted in a way that felt familiar to Indigenous patrons (fiction works sorted by author surname and non-fiction by topic heading) rather than using the Dewey Decimal System that was first introduced in the United States. “We’d heard that Indigenous patrons weren’t even using the library because they couldn’t find things,” Martin-Bird says, “and we wanted to make the library more accessible.”

It was a start — but, other than one mural painted by an Indigenous artist, the spaces still lacked physical elements that reflected the local community’s cultures and values. That was particularly true at the Brodie branch, where the IKC was surrounded by western and colonial architecture in a century-old Carnegie building that features stained glass windows depicting famous white authors. “It was really important to have the perspectives of Indigenous people who use the library represented in a space that was more welcoming and familiar,” says Robyn Medicine, TBPL community hub librarian and Indigenous relationships supervisor.

In the spring of 2019, TBPL representatives approached Codesign, a charity that brings post-secondary design students together with Canadian communities to work on projects of mutual benefit at a local level. Together, they explored the possibility of having furniture created for the IKC that better reflected the spirit of the Indigenous community. Chisholm, also a part-time professor in Sheridan’s furniture program, saw a perfect opportunity to harness the talents of Sheridan students.

For more than a decade, third-year Sheridan furniture students have participated in community engagement projects as part of their curriculum. However, this initiative was far more involved than typical third-year projects. To ensure they would deliver something that truly reflected their clients’ values and stories, students needed to spend extended time with their Indigenous partners — no small ask, given the 1,400-kilometre distance between Oakville and Thunder Bay. That also meant significantly higher costs, which were covered through funding from Sheridan, the TBPL and a grant from the Toronto-based Metcalf Foundation. 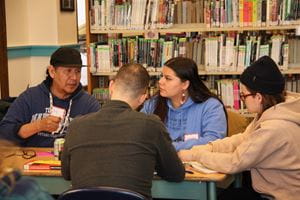 Then, in January 2020, 10 students accompanied Chisholm and Fleming to Thunder Bay for three days to build relationships through a variety of shared activities, including snowshoeing in -30C weather up Animikii-wajiw (Mount McKay), eating meals together, brainstorming sessions and collaborative design work.

“The most important part of design is being empathic, and empathy starts with listening. It was really important for the community to see and hear our students listening to what they had to say,” Chisholm says. It was really important for the students as well. “We gained a solid appreciation of the people we were working with,” notes Lewis. “If you don’t know who you’re designing for or the space you’re designing in, there really is no project.”

That understanding shone through in the final designs, which included rounded edges and imagery of turtle shells, tree roots and porcupine quillbaskets, all suggestions that were made by Indigenous participants during the design process. “There were no harsh edges and there was more flow, which symbolizes Indigenous world views that are more cyclical and circular than Western world views that are more linear. Trees are an important part of our culture, and turtles are really key to our creation stories,” Martin-Bird says. Adds Fleming: “We didn’t go through many revisions at all. The students really nailed every aspect of the designs.”

Having obtained approval from their clients, furniture students and faculty eagerly began the fabrication process in early March — days before COVID-19 forced the closure of post-secondary campuses across North America.

When Sheridan’s campuses re-opened in a limited capacity last fall and furniture students were able to return to the studio, their work was cut out for them: both literally and figuratively. Many parts of the furniture had been milled, but it would still take hundreds of person-hours to assemble, and time was at a premium for students who also had to juggle fourth-year commitments that included an extensive thesis project.

Still, they were adamant to finish what they’d started — in part because of the relationships they had built the previous spring. “We needed to hold onto this as strongly as we could. We’d made a promise to that community, and we felt accountable to them,” Lewis says. “Not in a way that a debt is owed, but feeling a personal connection, wanting to make them proud and wanting them to feel like the space was theirs.”

Fabrication resumed for a few weeks in September, outside of class hours, before picking up again in January when students and faculty had additional capacity. Students and staff put in an entire week of work while Sheridan was still on holiday shutdown, and some also continued the project during Reading Week at the start of March. By June, one year later than initially expected, the furniture had been assembled, and Lewis, Chisholm and Fleming returned to Thunder Bay to install the pieces in the Brodie Resource Library.

A reclamation of the space

Sitting on one of the new curved benches in the Brodie IKC, community participant Ben Murray marvels at how the furniture has changed the space.

“This is cool to see it all become a thing. It’s really neat,” smiles Murray, who wasn’t sure the project would be completed after it was disrupted by the pandemic. “Growing up in this neighbourhood, I’ve seen underrepresentation of Indigenous infrastructure in general. Seeing stuff that is familiar is going to bring people in here and help them feel more comfortable in this space and bridge the community. Because that’s what a library really is, at its deepest core: a place for people to come and connect. The fact that the Thunder Bay Public Library is taking reconciliation seriously is really important. It’s a good first step.”

Martin-Bird agrees. “I’m really impressed with the amount of work that went into it, and the talent that is reflected in the pieces,” she says.

“Having furniture that reflects our worldviews and values, it feels like the beginning of a reclamation of this space.”

In top photo, a table with quill basket patterns is one of the pieces Furniture students built for the Brodie Resource Library. In second photo, students gather with members of Thunder Bay's Indigenous community in front of Animikii-wajiw (Mount McKay), the mountain they snowshoed up together as part of relationship-building activities. In third photo, participants in the project collaboratively design furniture for the library. Photos submitted by Peter Fleming and Connie Chisholm.