A season with the boys of summer

Receiving the Toronto Blue Jays Sports Medicine Scholarship Award for Athletic Therapy was a significant achievement for Sheridan student Tommy Kratky. Being presented with the award on the field at the Rogers Centre in front of a nearly sold-out crowd before a Jays and Orioles game in September, was icing on the cake. The fourth-year Athletic Therapy student spent the 2014 Jays season interning with the team as an assistant athletic therapist, a coveted position that has been filled by a Sheridan student each year for a quarter of a century.

Although his internship officially started at the beginning of the regular season in April, Kratky had his eye on the opportunity since he first entered he program. “When my professors promoted the scholarship opportunities available to us in the upper years of the program, I knew I wanted the Jays internship,” he said. “My goal has always been to work in professional sports.” The Kingston native is an avid sports fan and has been cheering for the Bluebirds since he was a child.

“When my professors promoted the scholarship opportunities available to us in the upper years of the program, I knew I wanted the Jays internship” – Tommy Kratky

Walking into the clubhouse of a professional sports organization and helping with the treatment of some of the highest-paid, most-decorated players in the league may be an intimidating prospect for some, but Kratky took it in stride. He was eased into the role with the guidance of veteran head athletic trainer of the Jays, George Poulis, and Jays’ assistant athletic trainer Mike Frostad. He was assigned to help with batting practice, arriving seven hours before each game to help re-stock supplies and apply modality treatments to players, and assisting with post-game routines.

During games he had some down-time and was on call in the training room in case Poulis or Frostad needed supplies brought out to the dugout. Kratky made use of this time and he practiced treatment techniques on staff passing through the clubhouse. In September he had the opportunity to work a Jays-Yankees home stand from the dugout. He was just feet away when legendary short-stop Derek Jeter took his last career at bat at the Rogers Centre.

With the multiple injuries baseball players face during a long major league season, Kratky experienced first-hand the impact those setbacks have on individual players and team morale. “They’re human. Some of those injuries are season-ending and so preparing each day to prevent injuries with the help of the training staff is something many players rely on,” he explained. With fifteen years in the big leagues, Poulis’ mentorship left Kratky in awe at how routine his approaches were to each unique injury he encountered. “All of the players have the utmost respect for him. He is a master of his craft,” Kratky said. 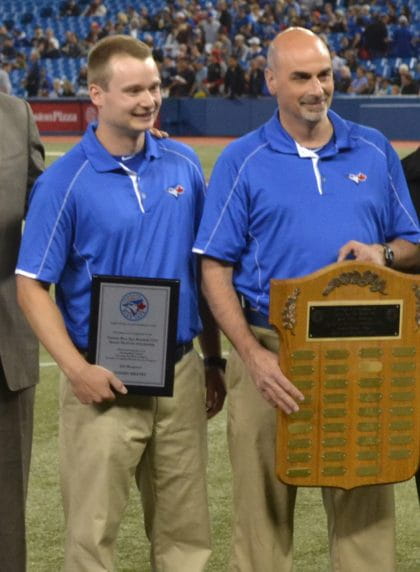 Reflecting on the season, Kratky described his final game with the team as “bittersweet.” “I got to know each player on some level so it will be sad to leave the team,” he explained. “But I achieved my goal and will be passing the torch on to the next intern. I want someone else to have the same rewarding experience I had.” Heading into his final year at Sheridan with confidence, Kratky knows that one day he will be back working amongst pro athletes as a certified athletic therapist.

Written by: Keiko Kataoka, Manager of Communications and Public Relations at Sheridan.