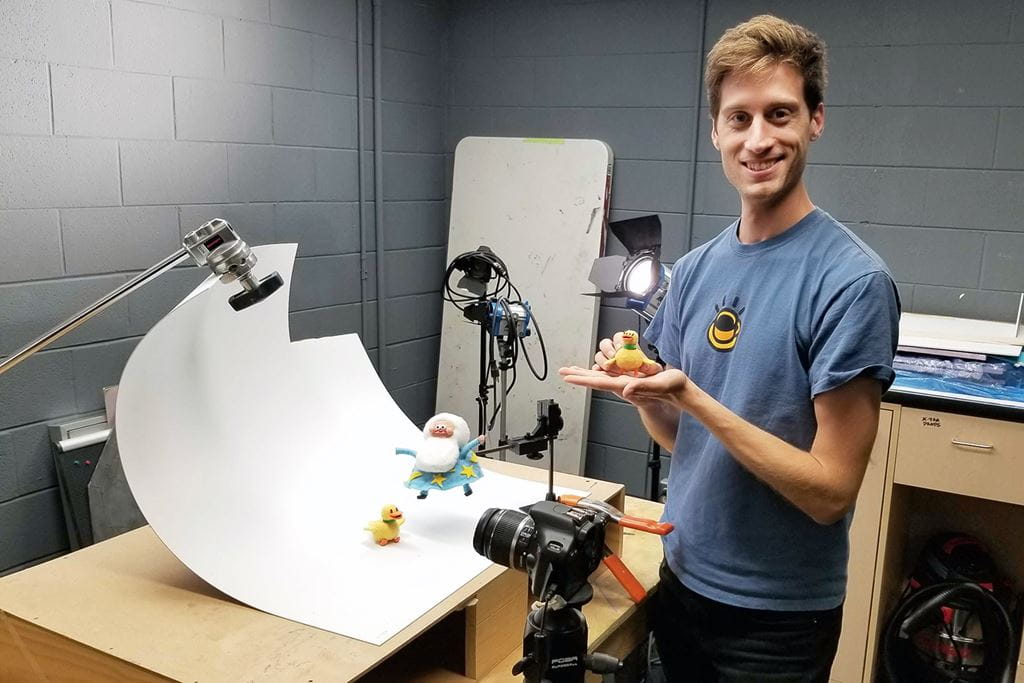 Terry Ibele was no longer interested in simply trying to make ends meet.

An animation fanatic since he was in elementary school, Ibele initially targeted a career in marketing because it seemed like the safer play. And it probably was. After earning his Business Administration degree in university, he worked in the head office of a vitamin company for three years, then was in charge of Search Engine Optimization (SEO) for a software company in downtown Toronto.

“I really enjoyed my career. But I wasn’t fulfilled at a deeper level, I guess you could say. I missed stop motion and animation, and I missed just being creative in general. I got to the point where I thought, ‘Why not turn my 9-to-5 into my hobby and turn my hobby into my 9-to-5?’”

“One day, I was just thinking, ‘What is my gravestone going to say?’ It was going to say something like ‘Terry, SEO amazing person.’ And I thought, ‘I don’t care about that.’ I’d rather it say, ‘Terry, animation director that changed the world.’ If I wanted it to say that, I’d better start doing things to get on that path.”

Ibele made the bold decision last year to leave his full-time job and return to school, this time to pursue a coveted Honours Bachelor of Animation degree at Sheridan. Being a post-secondary student for a second time brought a whole different perspective. “The first time, I didn’t know much about how the real world worked. I just hoped I could get a job by the end of school. And the professors seemed like gods,” Ibele says. “But after being in the workforce, I’ve figured out who I am and what I want to do. Now, I see my professors more as peers who I might want to grab a coffee with and chat. And I’m trying my best to take full advantage of all the opportunities Sheridan offers.”

Maximizing opportunities is something Ibele’s been doing for a while. He’s chronicled his creative ventures on his own website for the past four years; his YouTube channel and Instagram account have attracted more than 6,000 followers combined; his Reddit Karma score (an algorithmically-produced measurement of a user’s valuable content and comments) is approaching 50,000; and he hosts a podcast on which he interviews animation industry leaders.

Desire to create something personal

During those interviews with animation professionals, Ibele noticed a theme: almost all of them expressed how difficult it was to work on personal projects because they were too busy working on studio films. “That was something that stuck in my mind, because I’m here to pursue animation as a passion career,” says Ibele, who began creating his own stop animation films when he was in Grade 7 after discovering an old camcorder while cleaning out his late grandfather’s apartment. 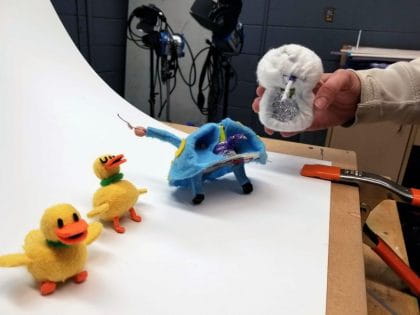 So when Ibele heard about Sheridan’s Animation Studio Production course — which enables students to access the college’s animation studios during the summer months when they are otherwise empty — he approached Bachelor of Animation Degree Co-ordinator Chris Walsh for more information. That course is designed for third-year students who have already learned about post-production techniques, but Walsh recognized Ibele was no ordinary first-year student. “He’s dedicated, he’s mature, and he’s focused. He’s able to connect the dots well when it comes to how the industry works. And, on top of that, he’s a very talented artist,” notes Walsh.

Sheridan Animation Technologist Aldines Zapparoli was a bit more apprehensive, at least at first. “Chris asked how I felt about it, because I’d likely be the person who Terry would be coming to when he needed help. I wasn’t certain,” Zapparoli says. “Then I met him and said, “Oh, yeah. For sure.”

Armed with access to Sheridan’s technology and $50 worth of dollar-store supplies, Ibele began working on a short stop-motion script written specifically for Davey Swatpaz, a voice actor he’d recently interviewed on his podcast. The premise was simple: a dim-witted wizard whose only magical ability was to turn various objects into ducks. “Davey had very limited time. So I sat on my couch, wrote an idea and said, ‘OK, here you go.’,” recalls Ibele.

But that’s hardly the end of the story. Leveraging his marketing background and expertise in SEO, Ibele promoted the short film on his website and social media channels. Within days, his film had received more than 190,000 views on YouTube and prompted responses from several industry heavyweights. 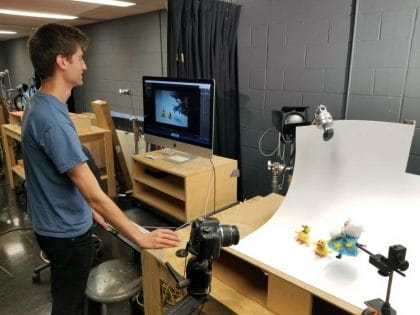 “All the attention it’s received has been really cool. But, for me, it’s more like checkmarks that I’m on the right path. Quitting my business job and going back to school, there have been a lot of risks,” Ibele says. “This was a sign that if I keep doing this, more good things will come.”

It also illustrates the powerful potential of what can be created in Sheridan’s animation studios when students give themselves time to let their minds wander and work on something they’re passionate about. “I’d love to see more stuff like that come out of our studios. I’ll happily take on assisting students during the summer because I enjoy it,” says Zapparoli, who walked Ibele through the Dragonframe post-production software and also provided tips about lightning, depth of field and framing.

“He’s dedicated, he’s mature, and he’s focused. He’s able to connect the dots well when it comes to how the industry works. And, on top of that, he’s a very talented artist.” – Chris Walsh

“They’re world-class studios that students are able to access at a very affordable rate,” adds Walsh. “There’s something very special about the fact that it’s an educational institution that can allow for that, and that the course is designed for students to drive themselves creatively and explore things creatively.

“It can be a challenge for our students to find time to work on personal projects because they’re so tasked with assignments. And once they graduate, they may be employed instantly — which is very good — but that puts demands on them as well. School is a nice bubble for doing something like Terry’s done, and you hope the students value the opportunity. We encourage them to make the most of it.”