Playing with fire: Gearing up for a second season of Blown Away

Two years ago, terms such as marver and puffer were reserved for those embedded in the world of glass artistry.

But these days, glass-speak is going mainstream, thanks to the success of Blown Away, the competition series that became one of 2019’s most bingeworthy shows on Netflix.

The series, which saw 10 exceptional glass blowers competing for the title of “Best in Blow,” earned rave reviews after its debut. It was praised for its ability to showcase a deep appreciation for the art of glass blowing and a respect for the artists who had mastered the medium.

Most importantly, it was fun to watch. Viewers marvelled as contestants molded molten material. They gasped when a competitor’s prize-winning piece crashed to the floor. They rooted for their favourites and watched earnestly to see who was eliminated at the end of each episode. Through Blown Away, a new community of glass blowing enthusiasts was born.

“[Blown Away] drew a lot of attention to glass blowing – every studio owner I know was completely booked for classes,” says Sheridan alumnus Rob Raeside (Craft & Design – Glass '14), who served as an assistant on the series. “There are so many people who are aware of the medium and are looking at the cups they drink out of with a new appreciation.”

Fortunately, fans will have the chance to swoon over glass sculptures and put their learned lexicon to use again this Friday (January 22) when the much-anticipated second season of Blown Away debuts on Netflix.

“I think originally, some of the professional glass world was a bit skeptical about a reality show, but now, I think most of them are convinced it was the right move. (They know) it helped the whole community, and that even individual artists and studios are benefitting from this exposure, even if they’re not directly involved. People are looking at glass with different eyes.” – Koen Vanderstuken, Head of Glass at Sheridan

Many of the same players are back for the new season, including host Nick Uhas and Koen Vanderstukken, Sheridan’s Head of Glass, who serves as series consultant. Students and alumni from Sheridan’s Bachelor of Craft and Design (Glass) program, who contributed to Blown Away’s development and were featured heavily on the first season, are also back on set, serving as featured assistants for the contestants.

But this time around, the standout series has gone global, featuring 10 competitors from around the world. For Vanderstukken, having such a prestigious pool of glass artists competing in the second season of Blown Away is indicative that the first season was successful in both winning viewers, and the respect of those in the glass industry.

“I think originally, some of the professional glass world was a bit skeptical about a reality show, but now, I think most of them are convinced it was the right move,” he says. “(They know) it helped the whole community, and that even individual artists and studios are benefitting from this exposure, even if they’re not directly involved. People are looking at glass with different eyes.”

Filming took place in early 2020, just before the COVID-19 pandemic brought the world to a standstill. Sheridan glass artists were reunited at the show’s set in Hamilton – the largest hot shop ever constructed in North America, built with the help of several Sheridan Glass alumni and students. 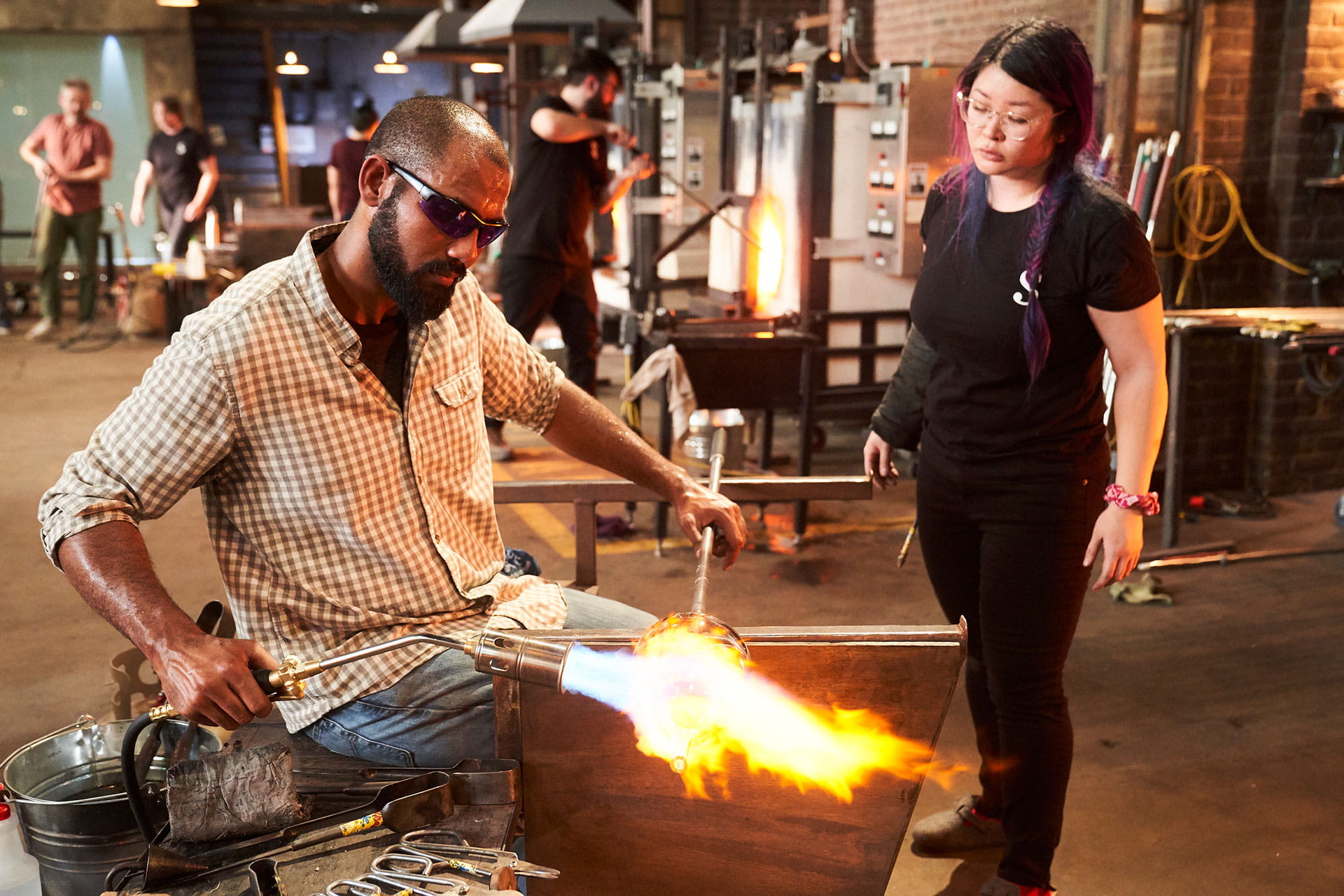 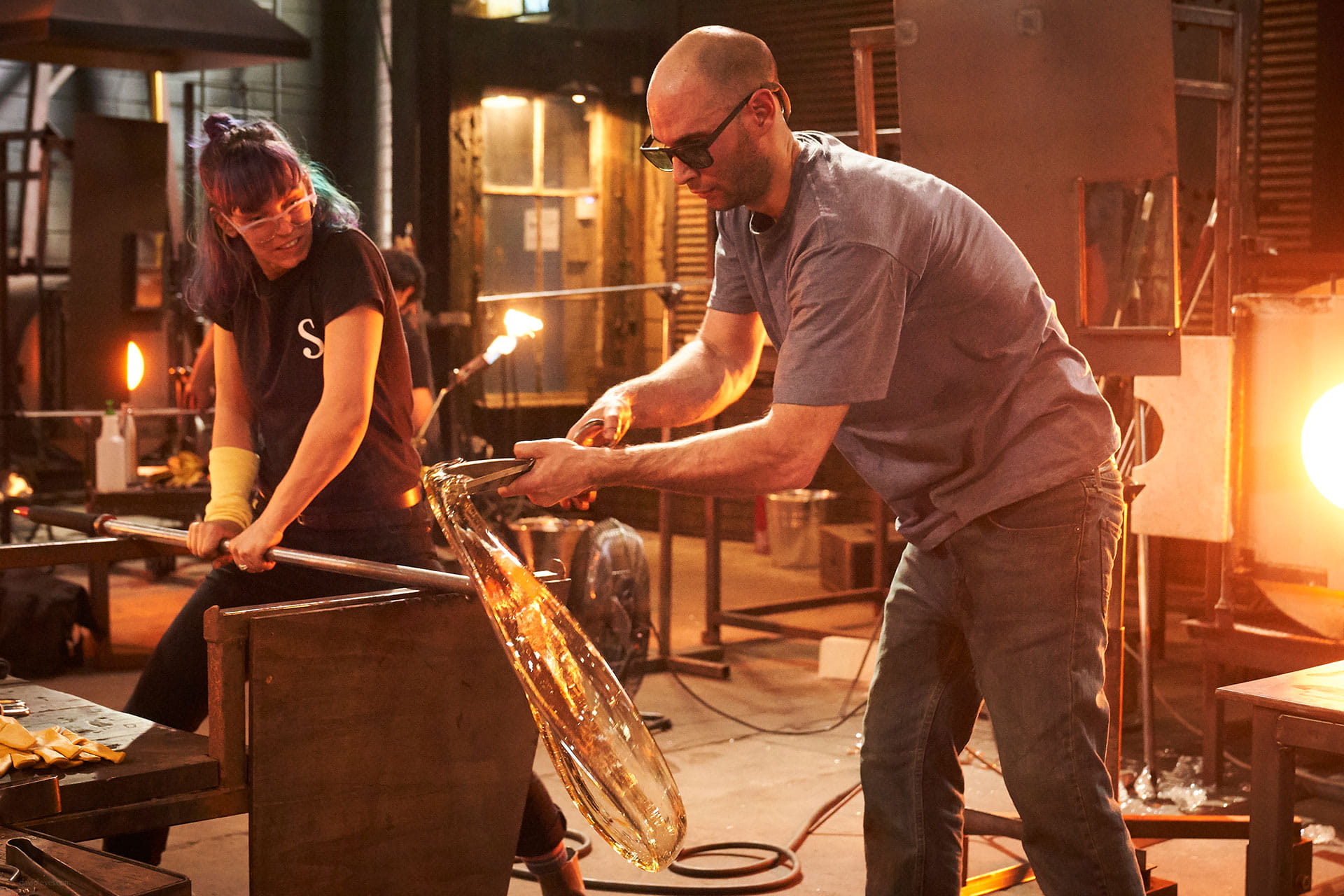 Getting back into the glass groove

Vanderstukken is quick to point out that many of the students and alums who served as assistants on the first season of Blown Away came onto set already embedded with the knowledge they needed, thanks to the education they received through Sheridan.

“They’re not just students, as many viewers may think when they see the show,” he says. “They’re fantastic young people that have a lot of skill and a lot of passion for what they’re doing. And they’re extremely good at it.”

But there’s value in having experience from the first season, and many of the assistants noticed an ease that came with returning to the familiar hot shop. They knew how to prepare, what to expect, and how to help the competitors realize their goals in each challenge.

“It’s about using all the techniques I’ve acquired over the years to help somebody work through their idea flawlessly. Communication and orchestration are key. The timing between a gaffer and their assistant has to be impeccable.” – Alyssa Getz (Craft & Design – Glass, ’11)

Thanks to that comfort level, Vanderstukken says there was less improvisation on set and a better understanding of the process. That meant Sheridan assistants could focus on the most important part of their role: helping the gaffer (or primary glass blower) realize their vision in each challenge.

“It’s about using all the techniques I’ve acquired over the years to help somebody work through their idea flawlessly,” says returning series assistant Alyssa Getz (Craft & Design – Glass, '11). “Communication and orchestration are key. The timing between a gaffer and their assistant has to be impeccable.”

Timing is crucial, and a gaffer must work seamlessly with their assistant to support the entire process. There’s an internal rhythm embedded in every glass artist to ensure a piece transitions from flame to finish.

Fortunately, Sheridan’s Glass students have the unique opportunity to work with resident artists frequently through the Glass program, and alums often moonlight as teachers in addition to running their own businesses. Emma McDonald (Craft & Design – Glass, '19), for example, teaches glassblowing for beginners at Mississauga’s Living Arts Centre, as does Courtney Downman (Craft & Design – Glass, '20). It’s par for the course for students and grads to work with strangers.

“(As you work with a gaffer), you can anticipate their needs and their movements,” says McDonald. “Once you work with someone for long enough, you get to a point where you don’t even need to speak any more.”

But add in a television crew, and space can get pretty tight in a hot shop. The glass blowing and production teams have had to come together to orchestrate movements, making sure paths are clear for artists and cameras.

“We work in tandem. If we know that something interesting is going to happen, we let (production) know so they can safely get a great shot of it,” says McDonald. “Each episode we learn a bit more about each other and how the other sides work.”

Shattering expectations for the second season

The beauty of a competition series featuring artists is in the unpredictability. There’s no telling how a competitor will interpret a challenge and what obstacles they’ll face along the way in executing their vision.

The second season of Blown Away promises the same excitement and creativity, with new challenges and approaches to glass artistry. While the show follows a similar format to the first season, McDonald says the new competitors have some interesting personalities, strange conceptual ideas, and new techniques that a lot of the glass artists on set “hadn’t seen done before.”

Before the first season of Blown Away aired one and a half years ago, the collective hope at Sheridan was that the series would elevate the perception of glass blowing as a complex, contemporary art form. Sheridan’s Glass program remains one of only two bachelor’s degrees in Canada and, founded in 1969, is still quite young. Tapping into Netflix’s 139 million subscribers would go a long way to generate interest for the program, and glass art in general.

“(As you work with a gaffer), you can anticipate their needs and their movements. Once you work with someone for long enough, you get to a point where you don’t even need to speak any more.” – Courtney Downman (Craft & Design – Glass, ’20)

Going into the second season, Vanderstukken hopes to build on the momentum and excitement from viewers, challenging more young people to explore the medium.

Getz says she’s not surprised Blown Away has seen such success.

“Glass blowing is mesmerizing, and the filmography of the show was stunning,” she says. “It really brought people in and piqued their interest. I’m really grateful that they loved it and that there (is) a second season because it’s important to show passion, craftsmanship and dedication to the public.”

Pictured at top: Sheridan Glass alumni working as assistants on set of Netflix’s second season of Blown Away. Images by David Leyes, courtesy of marblemedia.