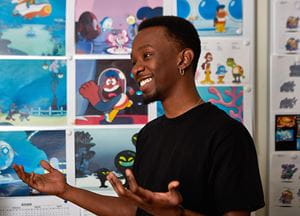 “I was born in Ghana in ’92, and raised on DsTV, Cartoon Network, Nickelodeon, MTV Base, and TRL. Timbaland, Missy, Aaliyah played at every after-school jam, pool party and sleepover. Dexter, Dee Dee and Spongebob were the sounds of lazy weekends. I’d see fun names at the end of these incredible shows like Craig McCracken… and dream and dream. This feels very full circle.”

That’s Gyimah Gariba (Bachelor of Animation’13) looking back on his passion for animation from the time he was a little boy in Ghana, to the recent launch on CBC Kids of Guru Studio's newest animated series – Gariba's first as creator – Big Blue.

As Gariba says, it truly is ‘full circle.’ Big Blue, built around two Black siblings who are out to save their underwater world from an environmental disaster, is being aired on CBC in Canada, on Nicktoons in the UK and Ireland, ABC Me in Australia, CTC Kids in Russia, and NRK in Norway. Gariba’s is now one of the ‘fun names’ that scroll down the screen at the end of a show, inspiring children across the globe to dream, as he once did. What adds almost a prescient flourish to Gariba’s Big Blue is its theme music provided by Grammy winning musician Timbaland, an artist entrenched in Gariba’s early memories of Ghana.

It’s a magical coming alive of dreams, spurring Gariba’s vivid imagination to compare Sheridan to Hogwarts – the fictional school of wizardry in the Harry Potter series - and the animation peg bar he used in class to a magic wand. Recalling how he’d ‘geek out’ over animation with his classmates, he says: “I think the wildest experience for me was to be this singular person, so interested in animation, and then meet other people (at Sheridan) who grew up in different parts of the world and were also just as interested in these very same, specific things. It was like being at Hogwarts where you're like: ‘Oh, I can't believe you're a wizard as well!’” As for the magic wand, the students had their animation peg bars at Sheridan which they could never, ever lose, he recalls laughingly.

It was Sheridan’s reputation as a Hogwarts of sorts, or a training ground for those with exceptional skills and passion, that encouraged Gariba to seek admission to the College after his schooling in Accra, the capital city of Ghana. “The two schools I thought of were CalArts and Sheridan. Budget-wise, especially for an international student, it was impossible to go to CalArts. My family’s finances would’ve been wiped clean. Sheridan seemed to yield the same results, going by what its alumni achieve. It was clear to me that other people who’d want to know more about the medium would also flock to Sheridan,” he says.

Prized community of artists at College

At Sheridan, Gariba found the community he was looking for. He says while his teachers were amazing, what really helped him grow as an artist was all the other students, their stories and what brought them to the school. When Guru Studio gave him the opportunity to create Big Blue, it was this very community he drew on for support. He brought other Sheridan graduates onto the production team, including Marianne Mastrofini (Art Fundamentals-Illustration ’06) to design the logo, Lee Ann DuFour (Animation’10) as Location Designer, Chris MacDonald (Animation’10) as Character Designer, and William Scott Forbes (Bachelor of Animation ’11) as Art Director, among others.

“I think the wildest experience for me was to be this singular person, so interested in animation, and then meet other people (at Sheridan) who grew up in different parts of the world and were also just as interested in these very same, specific things. It was like being at Hogwarts.”

“One of the things I'm thankful for is our community of artists that gathered at Sheridan. Going through the school process, you find other like-minded artists and when it came down to finding a team for Big Blue, all I could think of were my peers because I know how they work. We all did the same kind of stuff; I saw what their work looks like; I saw their points of view; and I was really excited to tap into that. They’re all such talented artists and I look up to them. It was a great experience,” he says.

While Big Blue delights all children with its underwater adventures, quirky characters and generous sprinkling of jokes, Gariba has successfully intertwined key messages around environment and family with cultural and racial representation. Big Blue’s adventurer siblings, Lettie and Lemo, are based on Gariba’s own brothers and sisters, as he drew on his own childhood experiences to create the characters and conversations that populate the series. He says while this reflects his twin passions for family and community, it’s also his hope that Black children, seldom represented in the animation world, will find themselves reflected in these characters.

“My job as a creator is to give people who have never been in these positions, an opportunity to express themselves because it results in the kind of representation we see in the show.”

For Gariba, the representation of Black kids in the series wasn’t a conscious effort. He says that happened because when he was given the opportunity to create Big Blue, he thought about his family and what it looked like. “If someone asks you to draw yourself, you would draw yourself, or you’d draw someone just like you. Someone gave me an opportunity and I drew my family. When you give people, who’ve never had a chance, an opportunity to do something, you see a lot more genuine representation,” he says.

The realization has also made him think about his own role in the world of animation, and cultural and racial representation. “My job as a creator is to give people who have never been in these positions, an opportunity to express themselves because it results in the kind of representation we see in the show. The decision-makers at Guru or CBC looked at me and they were like, ‘Yeah, give that kid a chance,’ and then I made something that looked like me. If these opportunities are given, at the end of the day anybody can do a good job. Just give people a chance in roles that they aspire to,” he says.

“My gift is image-making and my interest is storytelling. …So whenever I have the opportunity to practice my gift that I enjoy so much, I try to send help back to every version of me that exists in Ghana.”

Gariba, named one of Animation Magazine's 2020 Rising Stars of Animation and one of “15 Young African Creatives Rebranding Africa” by Forbes, says while he enjoys animation, he also wants to give meaning to his work. Last year, he collaborated with Ugg during Pride Month for their “FLUFF FOR ALL” campaign—highlighting the brand’s bold and colourful Fluff It collection and sparking conversations on gender, race, and cultural heritage. He has also been using his illustrations to catalyze social change and promote LGBTQ2+ rights in Ghana, where Parliament is considering an anti-LGBTQ2+ bill that would make it a crime to be gay, bisexual or transgender.

“My gift is image-making and my interest is storytelling. This is the best way I can help. It’s also intensely personal because honestly, I feel guilty sometimes for making a living so easily and also have joy doing it. It's an irrational guilt but I really feel it, especially being from Ghana where if I was just being myself as a queer person, life would be a lot more difficult to maneuver. So whenever I have the opportunity to practice my gift that I enjoy so much, I try to send help back to every version of me that exists in Ghana.”