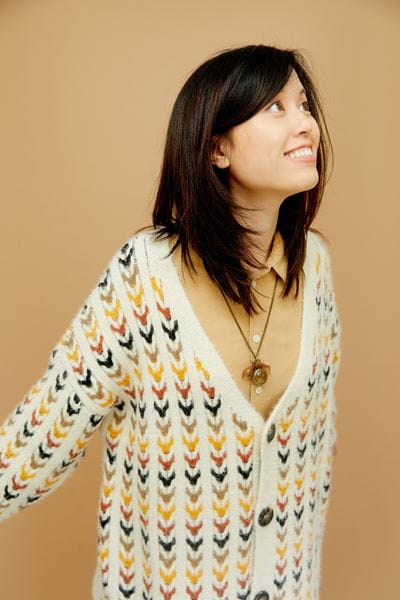 Born in Germany and raised in the Czech Republic, she was 16 years old when, during a family trip to Disneyland Paris, Tale solidified her career path. Rather than being captivated by the rides and attractions, she was drawn to a gift shop book about Pixar Animation Studios, which made her realize she could make a living by exploring her creativity.

That book, Pixar Treasures, also introduced Tale to Sheridan, and ultimately gave her the encouragement to pack up her life and move away from family and to a new continent. It was tough to make that journey, but once she arrived in Canada, she was able to thrive by immersing herself in a community of like-minded individuals who all grew up enjoying the same stories she did.

“Even though we were all from different parts of the world, it felt like we immediately had a common language,” Tale says.

As she settled into life at Sheridan, Tale realized that the structure, discipline, and the momentum of being surrounded by so many talented students in one place was vital to her learning and skill development. But her experience at Sheridan boiled down to one key element – gaining the knowledge and skill to let her imagination run wild.

“It felt like as long as you could dream it, Sheridan had the tools to do it,” she recalls

“It felt like as long as you could dream it, Sheridan had the tools to do it.”

As Tale explored different aspects of the animation process, she realized that her interests and skills mostly aligned with storyboarding.

“I thought I would want to be a comic artist for the longest time, and so storyboarding was a pretty natural transition,” she says. “It's a lot of big-picture thinking, but the delivery is up to you. This sort of flexibility and spontaneity, and the fact that the job keeps changing, it felt like it gave me the freedom to think about the next steps.”

In her final year, Tale did an internship with Toronto-based House of Cool – a pre-production animation studio co-founded by fellow Sheridan alum Ricardo Curtis (Animation ’95). There, she worked on storyboards for a variety of productions, with different types of audiences and budgets. Her credits with House of Cool included Kip and the Age of Wonderbeasts,  Guillermo del Toro’s 3Below: Tales of Arcadia and season 5 of Octonauts.

Following her internship, she worked on Paw Patrol: The Movie, drawing hundreds of storyboards as a vital member of the film, directed by another grad, Cal Brunker (Animation ‘03). After finishing the film, Tale took some time to evaluate her career trajectory and began to seek out new opportunities. This coincided with the onset of the COVID-19 pandemic - a period that saw significant shifts in the animation industry. Perhaps most notably, there was an influx of new animated productions, and new processes for ways animation teams worked and collaborated on projects.

Following weeks of interviews, Tale was able to secure a Story Artist role at Netflix. There, she worked on Steps, a yet-to-be released musical-comedy that plays on the classic Cinderella story, along with another yet-to-be-announced feature.

Today, Tale is still bringing her visions to life, much like she did at Sheridan.

“In storyboarding, you get an assignment from your director, but how to attack that scene, that's up to you,” she says. “That’s something that I really practised a lot at Sheridan. On any given day, you could attack an assignment in many different ways.”