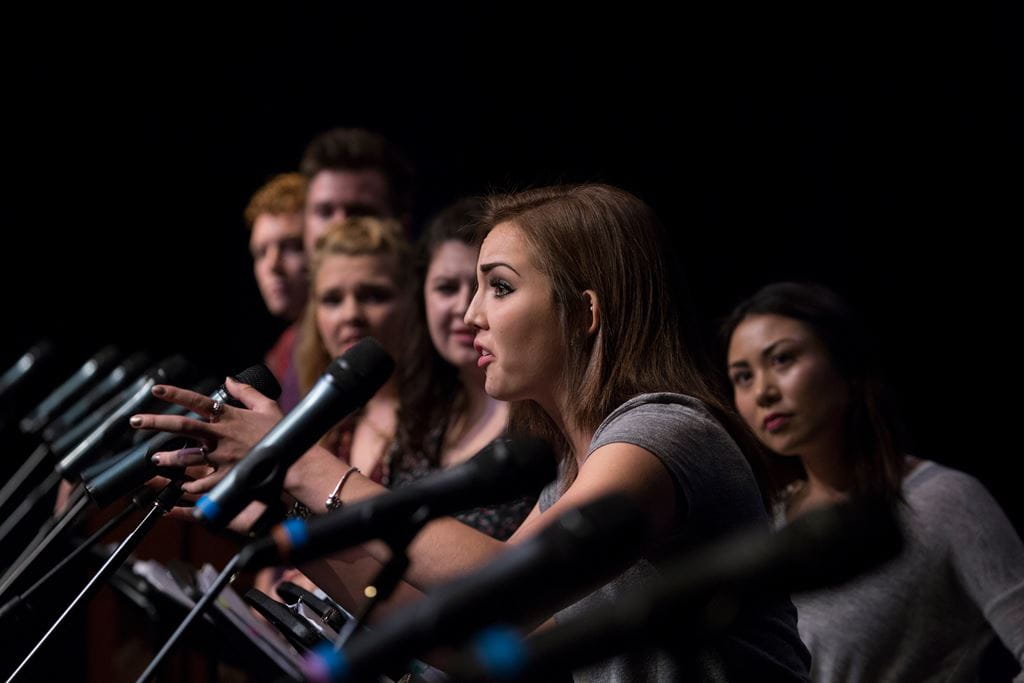 From school to stage

People are generally familiar with the concept of ‘bench to bedside’ – or the process that helps turn basic scientific discoveries made in the lab to improvements in patient treatment and care. For a post-secondary institution like Sheridan, with a growing renown for excellence in musical theatre development, an apt corollary may very well be ‘school to stage’.

Just over five years ago, Sheridan launched the Canadian Music Theatre Project (CMTP), Canada’s first permanent incubator dedicated to the creation of new musicals. With 15 new works under its belt – including the Tony Award® nominated Come From Away and the Dora Mavor Moore-winning Brantwood (which was Canada’s largest ever, site- specific, immersive musical) – the CMTP is contributing to what some are calling a renaissance for the genre in Canada, and putting Sheridan on the map as its hotbed. 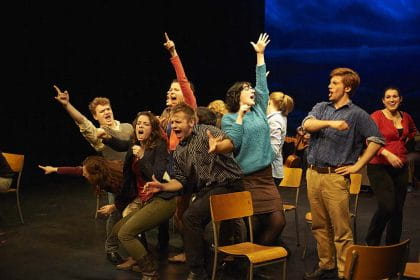 The brainchild behind the CMTP is Michael Rubinoff, a lawyer and commercial theatre producer turned educator. Rubinoff joined Sheridan in 2011. It was a pivotal time in the school’s Music Theatre Performance program, which was transitioning from an advanced diploma to a four-year, Honours Bachelor degree.

Rubinoff was deeply motivated by the challenge of finding a meaningful, applied learning experience that would serve as the new degree students’ capstone project. “I also looked at that opportunity through the lens of a producer who’s still active. I wanted the incubator to be a place where writers could undertake meaningful development to add to the canon of musical works created in Canada, and become a mechanism to capture and share some of Canada’s most prolific stories.”

“I don’t know if I believe in winners…What I do believe in is stories that don’t let go of me…that difficult to describe feeling when those emotions well up in you over and over again. I’m trusting my own taste and trusting that others will find that connection to the story as well.” – Michael Rubinoff

The formula for the CMTP is straight-forward. Find talented people – writers, lyricist and composers – and provide them with a writer’s fee, a professional director, a music director, and fourth year Sheridan students who perform the material over the course of five weeks and help bring the characters to life. Creators receive immediate and ongoing insight allowing them to continually refine their material, which can help accelerate development. The students get to experience what it means to wrestle a new musical off the ground. 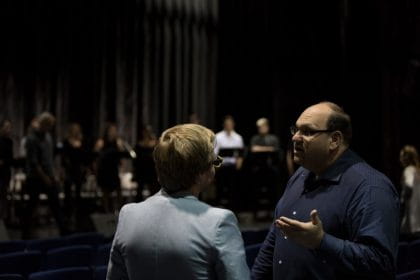 Each year, only three to four scripts are accepted. So, how does Rubinoff tell which script will be a winner?

“I don’t know if I believe in winners,” he quickly points out. “What I do believe in is stories that don’t let go of me … that difficult to describe feeling when those emotions well up in you over and over again. I’m trusting my own taste and trusting that others will find that connection to the story as well.”

That was certainly the case with the CMTP-incubated Prom Queen – the story of Marc Hall, the Toronto teen who fought for and won the right to bring his boyfriend to his Catholic high school prom – a musical that has since experienced its professional premiere at the Segal Centre in Montreal in 2016. It was similarly the case with the Theory of Relativity, a musical that has been licensed by Music Theatre International, which explores connections to friends, family and community as young people are on the cusp of going out into the world after college or university.

“I think there’s more of an interest and willingness to receive a story told in this form,” he adds. “It allows an emotion to be expressed in a compelling way that can’t otherwise be done in spoken word.”

For those like me, who haven’t ever really stopped to dissect an art form that we’ve long admired, Rubinoff explains, “Whether you have a crescendo, a key change, whether you take out music to do something acapella and then add music back in, there’s various ways of accessing the emotions of an audience. Each song advances the plot and to do that, there has to be an ability to communicate the dramatic moments of that song, and thereby the story that’s trying to be told.”

Beyond the importance of technique he cautions, “The CMTP is an incubator. That means we’re there to support the failure of writers. We’re not there to receive a finished script, do a bit of work on it and send it out to be produced. It just doesn’t work that way. The very best in the business will tell you that what makes it on stage is probably draft 472, not draft one.”

“…I firmly believe that the writers who come in here and engage our students, listen to our students, mentor our students and take risks with our students…those are the ones who find the most success.” – Michael Rubinoff

The CMTP’s academic mandate provides another layer of complexity, but equally an opportunity. “Not all writers are a good fit for our environment. Our students are still being nurtured but I firmly believe that the writers who come in here and engage our students, listen to our students, mentor our students and take risks with our students … those are the ones who find the most success.”

In tangible terms, Rubinoff defines success as writers leaving the CMTP, at a minimum, with a firm understanding of the structure of their show, a strong first 15 minutes, and a strong opening song. “If we achieve that, they’re in very good shape for the next stage of development to continue.” 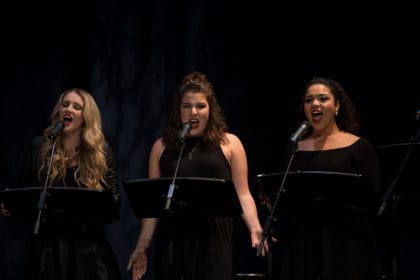 Increasingly, that next stage of development is reoccurring at Theatre Sheridan, which stages six productions per year that are performed by its students who audition for the parts and that are guest directed by visiting industry professionals.

“I’ve always subscribed to the notion that it wasn’t enough for us to develop new musicals. We also have to provide opportunity for further development, to add in production elements, so that writers can get more of a sense of their show. It’s critically important for us to continue to program new musicals into our season. The great news is that they’re the ones that are now selling out first- not the classics. We have an incredibly supportive audience who want to come and see what’s coming out of here.”

Besides Come From Away, another CMTP-incubated musical to follow this path was Senza Luce. It’s the fictional account of a town nestled deep in the Italian Alps that has never experienced daylight, and the brave, young man who challenges the status quo. Later this fall, Trap Door (originally developed through the CMTP under the title Small Wonder), makes its return, and does so on Theatre Sheridan’s main stage. It’s the story of a disappearing Toronto theatrical impresario in 1919 who’s faced with debts and obligations to gangsters and police.

“Most people say it’s such a risk to take on new musicals because they’re unknown and people won’t come. I think it’s just the opposite. People are hungry for new musicals. They’re curious to see new work and they want to be part of them from the start. They want to be able to say ‘I saw that when…” – Michael Rubinoff

“Most people say it’s such a risk to take on new musicals because they’re unknown and people won’t come. I think it’s just the opposite. People are hungry for new musicals. They’re curious to see new work and they want to be part of them from the start. They want to be able to say ‘I saw that when…’, so they’ll take the risk. They won’t all make it to Broadway, but I think our audiences do have a really fulfilling experience watching something completely new.”

While it may be hard to believe now, given the incredible success of Come From Away, Rubinoff initially struggled to find writers who were willing to take on the idea of a penning this musical. Almost just as hard was dividing the class and convincing some of the students to participate in its workshop rather than getting to perform in the classic, Sweeney Todd: The Demon Barber of Fleet Street. Despite the initial challenges, audience response to Come From Away is proving that new work is highly sought after indeed. 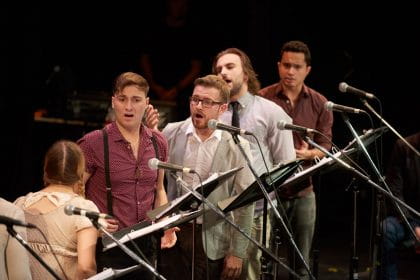 Another uniquely Canadian story, first developed through the CMTP and showcased on the Theatre Sheridan stage was Marathon of Hope. It’s the story of Terry Fox, who set out in 1980 to run a marathon a day, from coast to coast across Canada, despite being an amputee, to raise funds and awareness for cancer – a run that was cut short when the cancer returned and took his life before he could finish. The show enjoyed its professional debut at the St. Jacob’s County Playhouse in Waterloo Region in 2016, played at the Dunfield Theatre in Cambridge, Ontario this May, and is running at the King’s Wharf Theatre in Penetanguishine, Ontario this June.

In the fall of 2017, the CMTP will begin to incubate a Canada-China collaboration with the Shanghai Dramatic Arts Centre to co-create a musical based on the life of Norman Bethune, the Canadian physician who left a lasting impression on the Chinese people through his voluntary medical service during turbulent times in China in the late 1930s.

“Musicals are one of the most effective ways to tell our stories and export our culture,” Rubinoff explains. “We’re in constant search of ‘What does it mean to be Canadian?’ I think through this medium, we’re able to express what that means and that’s an important distinction to make when we sit geographically where we do.”

“Musicals also preserve history, just like literature and film,” he suggests. For that reason, Rubinoff isn’t shying away from using the CMTP to capture the less-than-glamorous moments of Canada’s past. “Theatre can shift perspectives and help audiences to learn. It can compel an audience to be more tolerant or kinder by getting a better understanding of another community. That’s a benefit to society that validates the importance of the arts.” In the fall of 2017, the CMTP will incubate Starlight Tours, a musical that explores historical accounts of police on the prairies who rounded up Indigenous men leaving bars and drove them to the outskirts where they’d be abandoned to freeze to death on winter nights.

“Musicals are one of the most effective ways to tell our stories and export our culture. We’re in constact search of ‘What does it mean to be Canadian? I think through this medium, we’re able to express what that means…” – Michael Rubinoff

“We’re in the midst of a renaissance,” concludes Rubinoff. “We’re seeing an increase in writers and composers and we’ve seen theatres across the country, like the The Arts Club in Vancouver, The Grand Theatre in London, The Musical Stage Company in Toronto, the Segal Centre in Montreal, and the Charlottetown Festival in PEI, that are committed to the development and production of new musicals.”

He also feels that there are a limitless number of stories that can be told. “As we continue to find those stories and writers who can tell them in a compelling and truthful way, people will continue to come to the theatre. At the end of the day, theatre is an experience. You don’t take a picture of it or record it.  You leave with a memory and it’s the memory of the emotions and feelings you had when you experienced it that you reflect on for years.”

Pictured at top of page: Honours Bachelor of Music Theatre Performance students performing a song from Rumspringa Break! An Am-ish Musical on stage at the 2016 CMTP Festival of New Musicals at Sheridan. Photo by Sheridan Photography alumnus Jonathan Bielaski.