Sheridan graduate Tahir Rana is set to dazzle the Toronto International Film Festival (TIFF) with his directorial debut Charlotte, which brings alive the true story of a German Jewish artist who defied incredible odds to create a masterpiece during World War II.

The film will be screened at the Princess of Wales Theatre on Monday, September 13, 2021.

Rana, a 2004 Animation graduate, directed the film alongside filmmaker Eric Warin. The stunning animation drama features the voice of Keira Knightley as Charlotte. A team of 19 Sheridan alumni from Sheridan’s Animation, Art Fundamentals, Visual and Creative Arts, and Art and Art History programs also worked with Rana in producing the film.

"Completing a film like Charlotte would not have been possible without the focus and dedication of the countless artists who worked with us to realize our goal,” Rana says. He acknowledged Sheridan for having been a valuable talent incubator for the film. “It is clear to me, from both having attended the school myself and recruiting the many alumni that I have over the years, that the education Sheridan provides its graduates is unparalleled with respect to supporting and fostering growth. Sheridan always has been, and will remain, the premier destination from which elite artistic talent originates," he says. 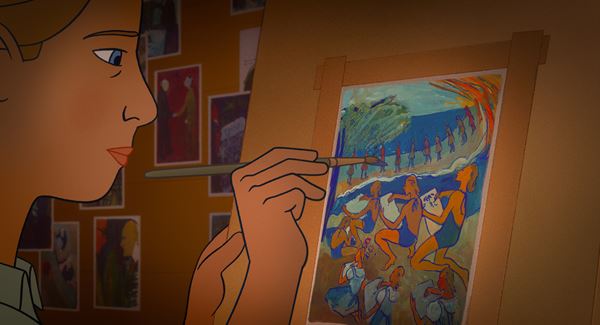 Charlotte is based on the remarkable story of Charlotte Salomon, a preternaturally gifted Jewish teenager who was forced to flee Germany after the Nazis seized power. Struggling to come to terms with her traumatic life, Charlotte produced over 1,000 paintings between 1941 and 1942 while hiding in the south of France. She imagined her life as a “singspiel,” or “song-play,” with narration, dialogue, and vibrant, raw images. By the time of her death at Auschwitz at the age of 26, she’d left behind her extraordinary expressionist “Song-play”: Life? or Theatre?

“We’re incredibly proud to see our alumni bring important, powerful stories like Charlotte to TIFF,” says Ted Gervan, Dean of Sheridan’s Faculty of Animation, Arts & Design. “A remarkable story of resilience in the face of oppression, the film is an inspiration to our current students, and a testament to the impact Sheridan grads have in Canada’s film industry.”
Sheridan graduates have also contributed to three other films at TIFF, including My Puny Sorrows, Night Raiders, and Dune.