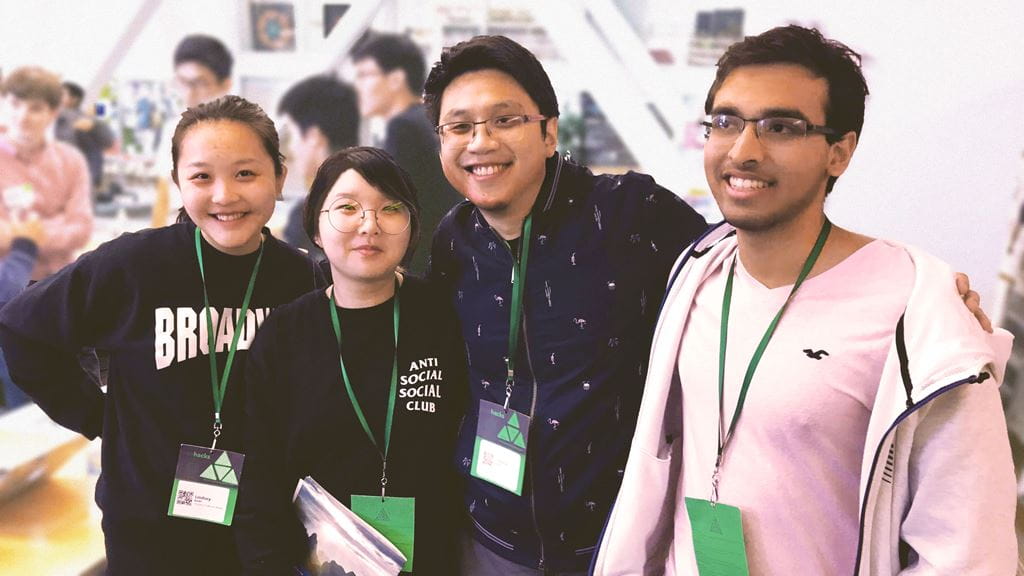 More than 850 people from around the world participated in TreeHacks, competing for over $119,600 (USD) in prizes. Representatives from companies such as Google, Microsoft, Facebook, Disney, IBM, Oracle, and Github were in attendance to support the hackers with snacks, swag, and workshops while actively recruiting students for internship positions in the Bay Area.

In the span of 36 hours, Weng and her team designed Soteria, a working prototype that presents critical health and vaccination information from the Centers for Disease Control and Prevention, travel advisory data from the U.S Department of State, and water and real-time air quality data from UNICEF and openaq.org.

“Novel key risks are highlighted for each country and required vaccinations are listed for the travellers,” says Weng. “Travellers can also use the interactive map on the landing page to get a quick, high-level view of travel and health advisories. Additionally, a feature will be added that will allow travellers to make appointments to obtain the necessary vaccines they are missing.”

Weng and her team won first place from Esri – an international geographic information system company – for Best Use of API and its Software Development Kit, as well as Facebook's award for Best Hack to Make the World More Informed. The team was awarded $600 USD, Oculus Rift Go virtual reality headsets, and admission to Facebook's exclusive Global Hackathon for students, which will take place in November 2019.

“It was unlike any hackathon I've ever been to before with the lavishness of it all, from start to finish,” says Weng. “Some highlights from the weekend included acai bowls for breakfast, performances from Stanford's juggling and jump rope teams, lightsaber battles presented by Disney, an escape room with Red Bull, puppy therapy, and karaoke.”

Weng will travel back to California in November to attend the Facebook Global Hackathon at Facebook’s headquarters in Menlo Park, where she will compete with her team again and meet with a Stanford mentor who will provide expert advice as they complete their project.

This is not the first bout of hackathon success for Sheridan students. Weng, who is the co-founder and president of the Sheridan student-run club Hackademics, and a team of Sheridan students earned an impressive third-place finish out of a total 78 teams at the Elevate Hackathon – the largest hackathon event in Toronto’s history – back in September 2018. Peter Lu, a third-year Honours Bachelor of Game Design student, also won two awards totalling $3,500 (USD) at Boston’s Reality Virtually Hackathon in January 2019.

Hackademics is a student-run club comprised of individuals from various Sheridan programs, including Mobile Computing and Interaction Design, as well as Centre for Mobile Innovation (CMI) student researchers. Its mission is to unite like-minded individuals who are eager to apply their knowledge and innovative skill set within the collaborative setting of a hackathon. The club recently organized Hackville, a successful 36-hour hackathon at Sheridan’s Trafalgar Campus in February 2019 – the first student-organized event of its kind at Sheridan.