Earlier today, Sheridan welcomed a visit by the Honourable Navdeep Bains, Minister of Innovation, Science and Economic Development and Minister responsible for FedDev Ontario, who together with Omar Alghabra, Member of Parliament for Mississauga Centre, announced a $1.5 million investment through FedDev Ontario for EDGE (Entrepreneurship Discovery and Growth Engine) – Sheridan’s innovation hub, located at the Hazel McCallion Campus in Mississauga.

EDGE offers training, mentorship and support to access funding to early-stage entrepreneurs. Since it opened its doors in 2017, over 40 start-ups have been supported, 13 of which reside in the co-working space at Sheridan’s Mississauga campus. Today’s investment will enable an even broader range and more concentrated set of innovation supports and services. It will help: develop entrepreneurship programming and a graduated cohort system; deliver workshops and events; support technical specialists and mentors; and enable prototype development and workspace enhancements. 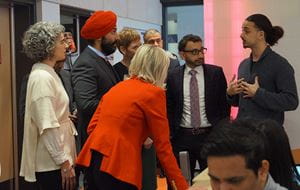 In making the announcement, Minister Bains was surrounded by entrepreneurs who have benefited from EDGE and who exemplify the Government’s goal of creating a pipeline of new companies in Canada. He noted that as a result of today’s investment, new companies will get the right mentorship, networking and access to financing that they need in order to thrive. “This investment is about partnership, collaboration, jobs, businesses and ideas moving forward in a manner that really helps to improve our quality of life,” he said.

One of those entrepreneurs, Ryan O’Neil Knight, a graduate of Sheridan’s Business program, described EDGE as a place that “allows a spark to fan into an ember and turn into a passion.”  He noted that businesses that fail are the ones that don’t get the right supports, but places like EDGE provide the right mentors to help people succeed. “Sheridan is now the go-to place … if you have an idea and you want to be an entrepreneur, this is your first step to get support and launch your business.”

Mayor Bonnie Crombie noted how the City understands the importance of innovation and is working every day to foster an environment where local and innovative companies not only start, but thrive, and where people’s ideas move from concept to commercialization. With the City a founding partner of EDGE, she thanked everyone involved in establishing the hub and in “helping to incubate the next generation of innovative new companies who will no doubt, take the marketplace by storm.”

Dr. Janet Morrison, President and Vice Chancellor at Sheridan noted that EDGE helps to further Sheridan’s mandate to “put creativity to work and nurture innovation that makes an impact.” She thanked Ryerson University for the invaluable advisory support they provide to EDGE based on their globally recognized expertise in incubation programming. She also thanked the volunteer mentors and Sheridan faculty whose generous contributions of time and expertise allow EDGE to respond to the enthusiastic interest for its support services. She further stressed that the Government’s “profound support will foster the development of new economic growth that will strengthen Mississauga’s role along the Toronto-Waterloo corridor.”
Pictured top right: Members of the Sheridan community with government delegates at the EDGE funding announcement.