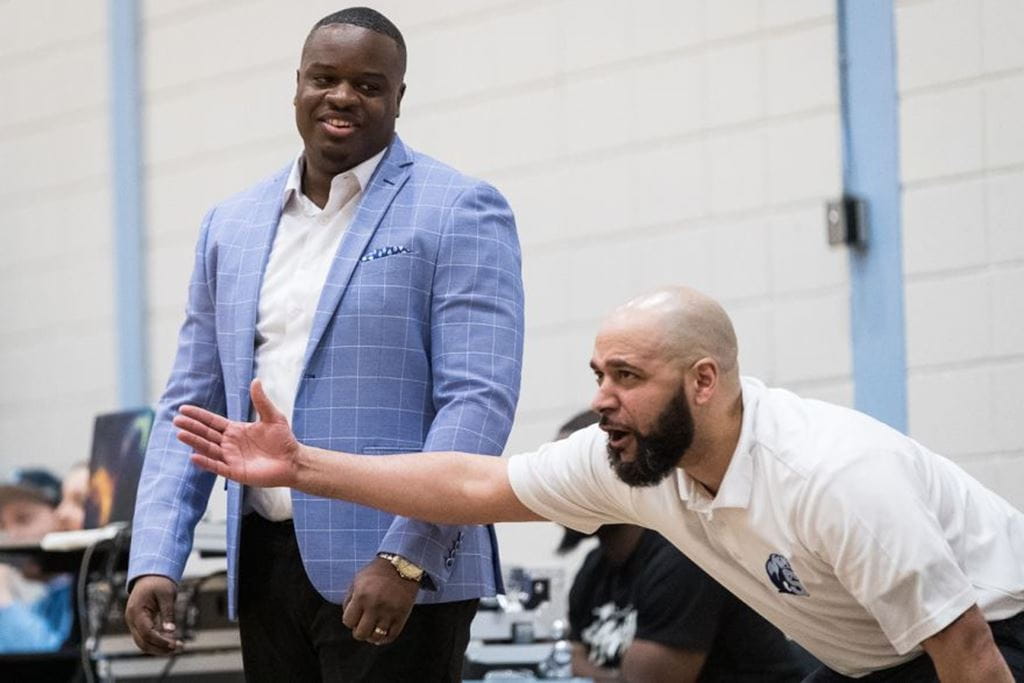 When you share a gym with one of the most successful college basketball programs in the country, it’s easy to get lost in the shadows.

Sean Douglas and Maurice Smith are determined to change that. 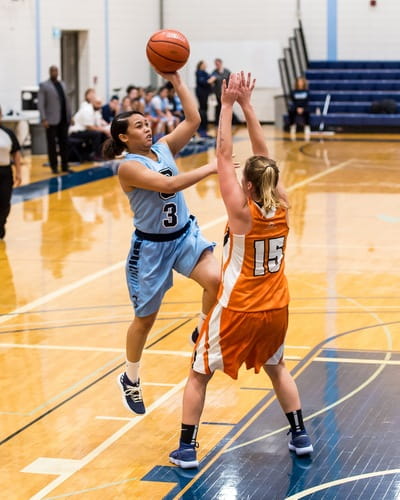 The Sheridan grads, who won a provincial men’s basketball title and reached the national final with the Bruins in the 2000s, have returned a decade later in an effort to vault the women’s basketball team to similar prominence. And while developing a distinct identity for the women’s team is a priority, Douglas and Smith have also been quick to borrow from the blueprint they’ve seen yield so much success for Jim Flack and Sheridan’s legendary men’s coaching staff over the years.

“It’s all about getting that buy-in and actually building relationships,” says Douglas, whose first move after being hired as head coach in 2018 was to bring Smith on board as an assistant. “Trying to figure out how to get the most out of them is the most challenging part.”

That’s exactly what Flack and his staff figured out how to do with Douglas and Smith from 2003-08. Friends since they were teenagers playing rep basketball in Brampton, the two guards formed a formidable back-court combination for the Bruins during a five-year run highlighted by a national silver medal in 2006, Ontario College Athletics Association (OCAA) title in 2008 and three OCAA regular-season division crowns. Smith’s contributions were easily measured by the stat sheet (he led the Central Division in scoring in 2007, averaging 16.9 points per game), while Douglas’ conservative but steady point-guard play earned him the Sheridan Coaches’ Award in both 2006 and 2008. “Sean would be the guy who beat the drum in a classical orchestra,” analogizes Flack, “and then you had a jazz drummer in Maurice.”

Time at Sheridan was influential on and off the court

But as much on-the-court success as Douglas and Smith enjoyed, it was the lessons they learned away from the hardwood that stuck with them the most. Neither was heavily recruited by Sheridan, and each had to accept lesser roles as freshmen than they were accustomed to in high school. “I remember Flack telling me that if I stuck with him and listened, I could become an all-star in this league and then an all-Canadian,” recalls Smith. “At the time, I’m thinking, ‘OK, sure, how’s this really going to happen?’ But then, when I started to feed into the culture and the message they were sending, I started to see all these things happen. If you listen and stick it out, the fruits of your labour that come from it are amazing.”

“There’s a lot of tactical things that we’ve changed. But there were also a lot of things we kept the same but just minimized in order to get the best out of them. It’s mostly been about bringing the culture back and having more of a family-oriented environment.” – Sean Douglas

It was at the 2008 national championship tournament, the final year for both at Sheridan, that the coaching seeds were sown. Smith recalls a guest speaker telling the players how it was virtually a crime not to give back to the game when their careers were over, given how much time and knowledge coaches had shared with them over the years. “It felt like the next natural step when my playing days were over,” agrees Douglas. 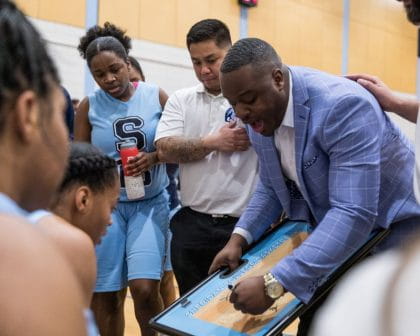 The fields of study that each had pursued at Sheridan also led them toward coaching at Brampton-area schools. Douglas, who earned diplomas in both Correctional Worker and Law & Security Administration programs, first worked in a youth detention centre before deciding he wanted to “get to those kids before the system got to them” and becoming a behavioural teaching assistant at Robert J. Lee Public School. Smith, also a grad of the Correctional Worker program, followed a similar path, working in behavioural programs at both Caledon East and Great Lakes public schools. Each began coaching their respective elementary schools’ basketball teams, then eventually teamed up as assistant coaches at Fletcher’s Meadow Secondary School in 2011 — helping the Arrows become the first Peel Region public high school team in eight years to qualify for the provincial championships.

Once Douglas got a taste of coaching, he was hooked. In addition to coaching at both Robert J. Lee (where he guided both the boys’ and girls’ teams to division championships in 2017) and Fletcher’s Meadow (taking over the senior girls’ program in 2012 and the boys’ in 2013), he became an assistant coach at Sheridan under Willie Delas in 2016. Two years later, with Delas looking to pursue other interests and Sheridan Athletic Director Flack seeking a new direction for the program, Douglas was the obvious choice to take over the Bruins women’s team. But the job wasn’t simply handed to him.

“I did insist he get put through the wringer. We put him under the microscope, and he had to tell us what his vision was. We hadn’t been having a lot of success with the women’s program and we wanted more, and Sean did a very good job of presenting what he wanted and how he would approach certain issues,” says Flack. 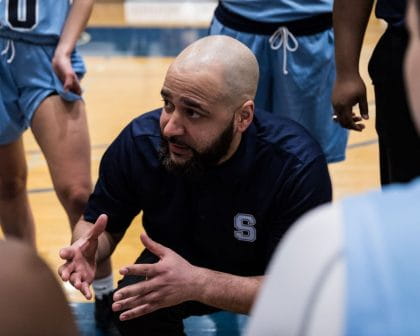 That approach has paid immediate dividends. In Douglas’ very first year at the helm, the Bruins won as many conference games as they had in their previous three seasons combined. After going 15-5 during the OCAA regular season, Sheridan added a 2-1 showing at the provincial championships, claiming the consolation title.

“There’s a lot of tactical things that we’ve changed. But there were also a lot of things we kept the same but just minimized in order to get the best out of them,” Douglas says in explaining the rapid turnaround. “It’s mostly been about bringing the culture back and having more of a family-oriented environment.” Smith adds, “Kids want structure, something to buy into. If we give them something as small as having to jog into the locker room at halftime or no jerseys ever hitting the floor, it’s small but it’s a buy-in. And it just makes them feel like they’re part of something bigger than themselves.”

The program’s new direction has certainly been noticed, both by veteran players as well as those new to the team.

“The culture has changed drastically. The women’s program always took a back seat to the men’s team because the men were winning so many OCAA championships,” says fourth-year player Camila Orellana, a past winner of both the Coaches’ Award and Rob Till Leadership Award. “My first year was very cliquey, where the starters hung out together and then there was the bench. Now, with the atmosphere we’ve created off the court as a family, it transitions onto the court where you have faith in your teammates to make that shot or make that pass. It makes you more confident to take chances because you know someone’s always going to be there to pick you up when you’re feeling down.”

“Kids want structure, something to buy into. If we give them something as small as having to jog into the locker room at halftime or no jerseys ever hitting the floor, it’s small but it’s a buy-in. And it just makes them feel like they’re part of something bigger than themselves.” – Maurice Smith

Adds freshman Jaedyn Dunkley, who was recruited by Douglas and Smith despite the fact she was still recovering from a torn ACL suffered in Grade 10: “They came to almost all of my games in high school, which showed me they were really interested and dedicated. They made it known that there’s no basketball without having your schoolwork done first. And our team just chills together. There’s no problems, which is hard to find with a group of girls.”

Flack’s loving what he’s seeing so far as well, in part because it looks so familiar. “One of the things I love is seeing Sean and Maurice mirror or mimic — not everything, because they have their own ingredients — but some of the stuff they were taught by us. The structure, the discipline, the consistency of the approach. It’s paying dividends, and it’s cool to see that, I’ve got to admit,” he says. “We even had an athletic director from a different college say that the women’s program looked a lot like the men’s: the way they act before the game, after the game, how they substitute. That was a pretty proud moment. It means there’s been some serious buy-in, and that I wasn’t just talking to myself years ago.”

Sheridan’s women’s team tips off the 2019-20 OCAA regular season October 22 versus Fanshawe. Get the full schedule.