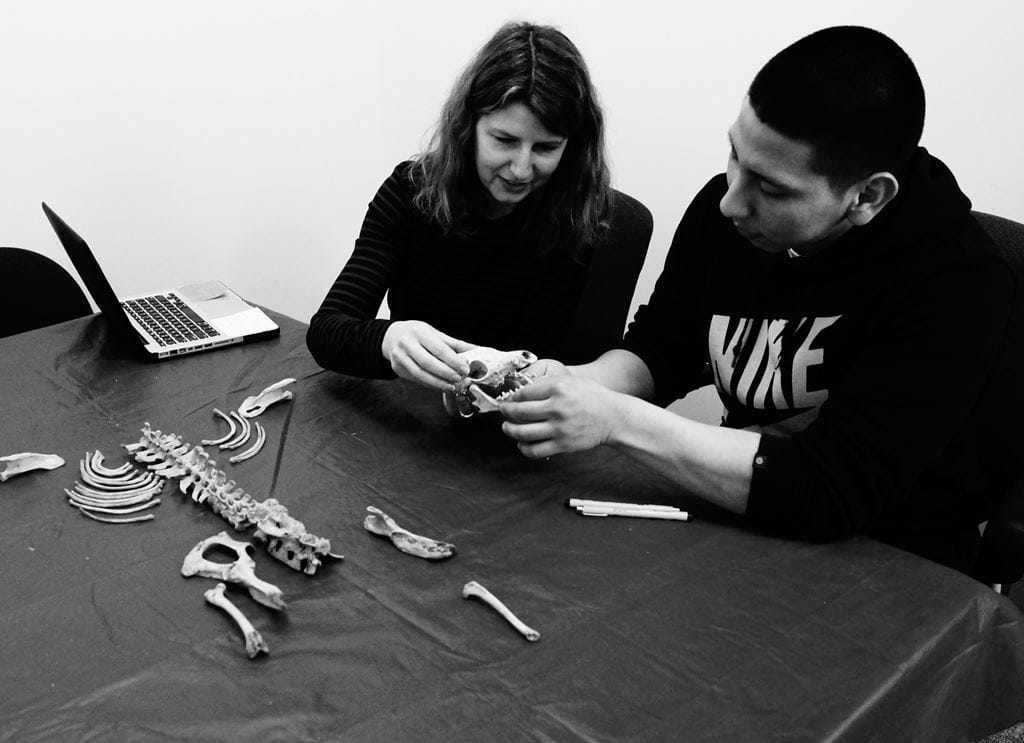 As a young child, Jaime Ginter was into solving mysteries and digging in the dirt, but it wasn’t until she started her undergraduate degree at the University of Alberta that she discovered a name for her passion – anthropology.

Fast forward 25 years, and Jaime had earned her BSc, Master’s and PhD in the field of biological anthropology and began teaching in that subject area as a professor in Sheridan’s Faculty of Humanities and Social Sciences. Her fascination in this field lies in reconstructing what people were doing in the very distant past. “My specialty is skeletal biology; I study human skeletal remains to see what I can learn about them – their age, sex, ethnic background, level of health, occupation, diet, and culture.”

“I study human skeletal remains to see what I can learn about them – their age, sex, ethnic background, level of health, occupation, diet, and culture.” – Jaime Ginter

What can bones tell us? More than you might imagine. For her PhD thesis, Jaime focused on health and lifestyle changes that occurred in southern Africa 2,000 years ago. She examined and compared the skeletal remains of hunter-gatherers and pastoralists to try and determine when and how the introduction of herding of domesticated animals occurred. 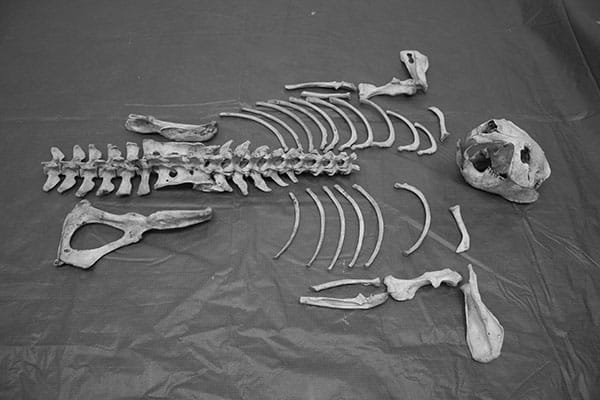 “I was expecting to find a difference in skeletal remains based on a change in food source because accounts of early explorers and other studies found that sheep and cattle herders tended to be very tall and lean, while hunter-gatherers were much smaller in size,” she says. “However, I did not find any significant differences in the size and shape of these people’s skeletal remains after the introduction of domesticated animals, which supports two possibilities: 1. that the initial introduction of domesticates did not significantly impact their diet, or 2. that domesticates were adopted by the hunter-gatherers who lived in this area rather than being introduced by foreigners migrating to the area.”

While skeletal biology is a very specialized science, it can also have meaningful applications across a range of disciplines, as Jaime has discovered. In 2010, she was able to negotiate a loan of human remains from an anthropology museum in Munich, Germany, to complement her personal collection of animal bones.

The museum shipped over a small collection of remains, including seven complete skeletons of varying ages dating from the 16th to 18th centuries, in 2011. To get assistance with processing, analyzing and curating the remains, Jaime turned to the Co-Curricular Record (CCR) program. The CCR is a document that tracks and records the learning and development activities that students undertake outside the classroom.

This led to opportunities over time for students from the General Arts and Science, Animation, and Athletic Therapy programs to work side by side with Jaime as research assistants – organizing, cataloguing and occasionally repairing bones. “The animation students used their experience to help them prepare for their human anatomy test, and found it really enhanced their knowledge,” she says.

“The animation students used their experience to help them prepare for their human anatomy test, and found it really enhanced their knowledge.” – Jaime Ginter

And in one case, the CCR experience fostered a keen interest in anthropology for one General Arts and Science student, who has since gone on to the University of Guelph to study nutritional anthropology.

Now that the collection has been organized, Jaime has incorporated it into the curriculum of her forensic anthropology, applied biological anthropology and anthropology of health courses. She has been working with Song Ho Ahn, a Visualization Researcher working in Digital Learning and Innovation in Sheridan’s Centre for Teaching and Learning (CTL) to complete 3D scans of some skeletal material from the collection, which will also be used in an educational app that Song is developing. “I wanted to give the students a real sense of what is typical from this period. In order to capture the unique features and contours of the bones, including damage and possible indicators of disease, high resolution 3D images were combined with SLR photographs.”

While her involvement in the CCR is voluntary, Jaime finds it rewarding. “I enjoy working with the students and doing what I was used to doing at university. Plus, it gives students the opportunity to explore the materials in a very hands-on, casual way, while learning more about human and animal anatomy.”