Celebrating Dave Tinker with a gift for the future

When Dave Tinker was looking for a new challenge in his marketing career, he found it in an unexpected place: teaching. It was the late 1960s, and a colleague told him about the new colleges opening around the province and suggested he give teaching a try. Tinker figured he would, while continuing to work in industry over the summer vacations.

He quickly fell in love with being a professor, and soon dedicated his full career to teaching. “It was a fun job,” he remembers. “I really enjoyed going and talking with the students. It was more of a conversation than me just standing and lecturing. I do remember in my own education lecturing didn’t excite me: talking with professors and teachers was much more fun. So I tried to make that my modus operandi.”

His captivating teaching style made his marketing classes a popular option on campus, and he was always ready to offer extra help. He was also well known for forging a connection with students outside the classroom, lacing up his skates for the faculty team of the intramural hockey league to face off against student teams. 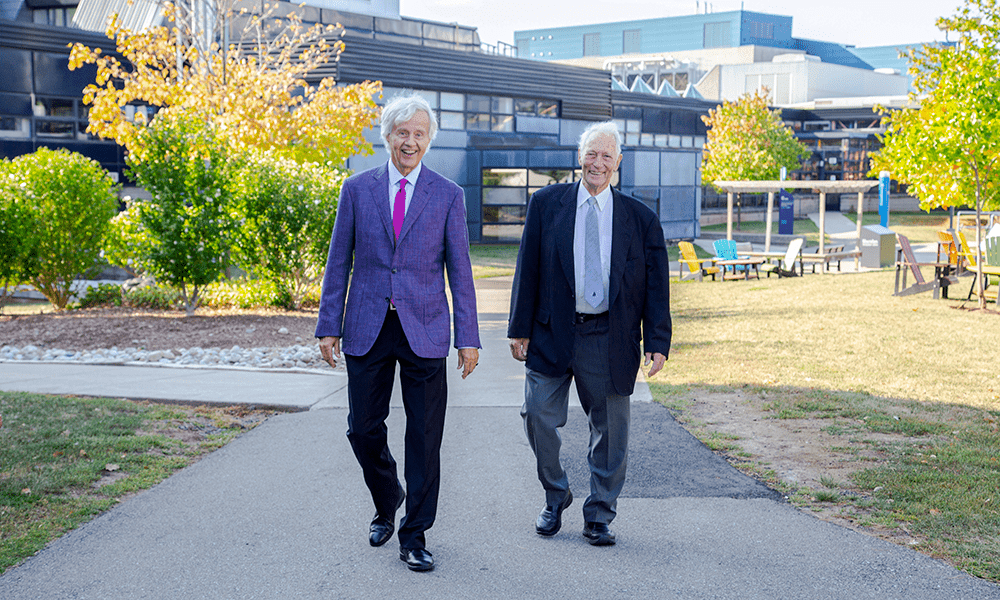 Peter Watson (Business ’69) fondly recalls learning in Tinker’s class. But it was Tinker’s genuine commitment to Watson’s success that left a lasting impact. Watson admits he was never a strong student. When he came to Sheridan as one of its first students in 1967, he found the support he needed to improve his academics. “Sheridan was family,” he says.

He remembers how all his professors – especially Tinker – helped him learn to study effectively, and he suddenly found himself getting the best grades of his entire life. As graduation approached, he applied to study business at university and says Tinker’s letter of recommendation was critical to helping him get accepted.

“Dave had an impact on so many students for 34 years. He contributed to their success and lives and this bursary is going to keep on giving.” – Peter Watson (Business ’69)

Watson went on to earn his MBA and set up his own successful investment and wealth management firm, Watson Investments, in Oakville. Over the years, his bond with Sheridan strengthened. He came back several times to speak to Tinker’s students and has addressed the convocation twice. In 2008, Watson was inducted into the Pilon School of Business Hall of Fame. Throughout the decades, he’s been proud to call Tinker a friend. So earlier this year, when Watson reflected on his career and how thankful he was for Sheridan’s contribution to it, it was no surprise that Tinker came to mind.

“Early in 2022, I was thinking about the past and gratitude. I thought of Sheridan and I thought of Dave. The idea came to me: it was time to recognize my friend Dave,” he says.

To honour Tinker, Watson has made a generous gift of $25,000 to Sheridan to create the Dave Tinker Endowment. Thanks to existing funds, the endowment now totals $50,000, and will support annual bursaries for two students in the Pilon School of Business. The bursaries will be renewable, meaning students can apply for support throughout all their years of study. As the endowment grows, it will be able to support more business students. Watson hopes fellow alumni who studied with Tinker will consider making a gift of any amount as a way to honour their former teacher, who was named Professor Emeritus in 2002, a title that recognizes an outstanding retired faculty member.

“Dave had an impact on so many students for 34 years. He contributed to their success and lives and this bursary is going to keep on giving,” Watson says. “This is Dave’s moment, and I’m happy to be a supporting cast member on it.”

Dr. Anne-Liisa Longmore, Dean of the Pilon School of Business, says the endowment is a fitting way to honour Tinker’s decades-long commitment to student success. “I’m so pleased to see Dave’s legacy commemorated in a way that will live on for future students,” she says. “It is incredibly inspiring to see how the impact our faculty have in the classroom resonates with our students, even 50 years later.”

Watson worked closely with Tinker to establish criteria for the bursary, which includes not only financial need, but also requires recipients to reflect on their ultimate goal upon graduation and demonstrate progress toward that goal, which can be based on academic achievement, extracurricular activities, practical work experience or personal growth.

“In some ways it’s a bit overwhelming,” Tinker says of having the endowment named for him.  “To know that this is coming together through Peter’s initiative, based on the idea that he received a good education at Sheridan, and in particular enjoyed my teaching… I do feel it’s an incredible honour.”

To make a gift in support of the Dave Tinker Endowment, click here or contact Jennifer Clarke, Senior Development Officer, at jennifer.clarke@sheridancollege.ca.

Alumnus Peter Watson, pictured above in purple tie, and his former professor Dave Tinker visit Trafalgar Campus to celebrate the creation of the Dave Tinker Endowment.