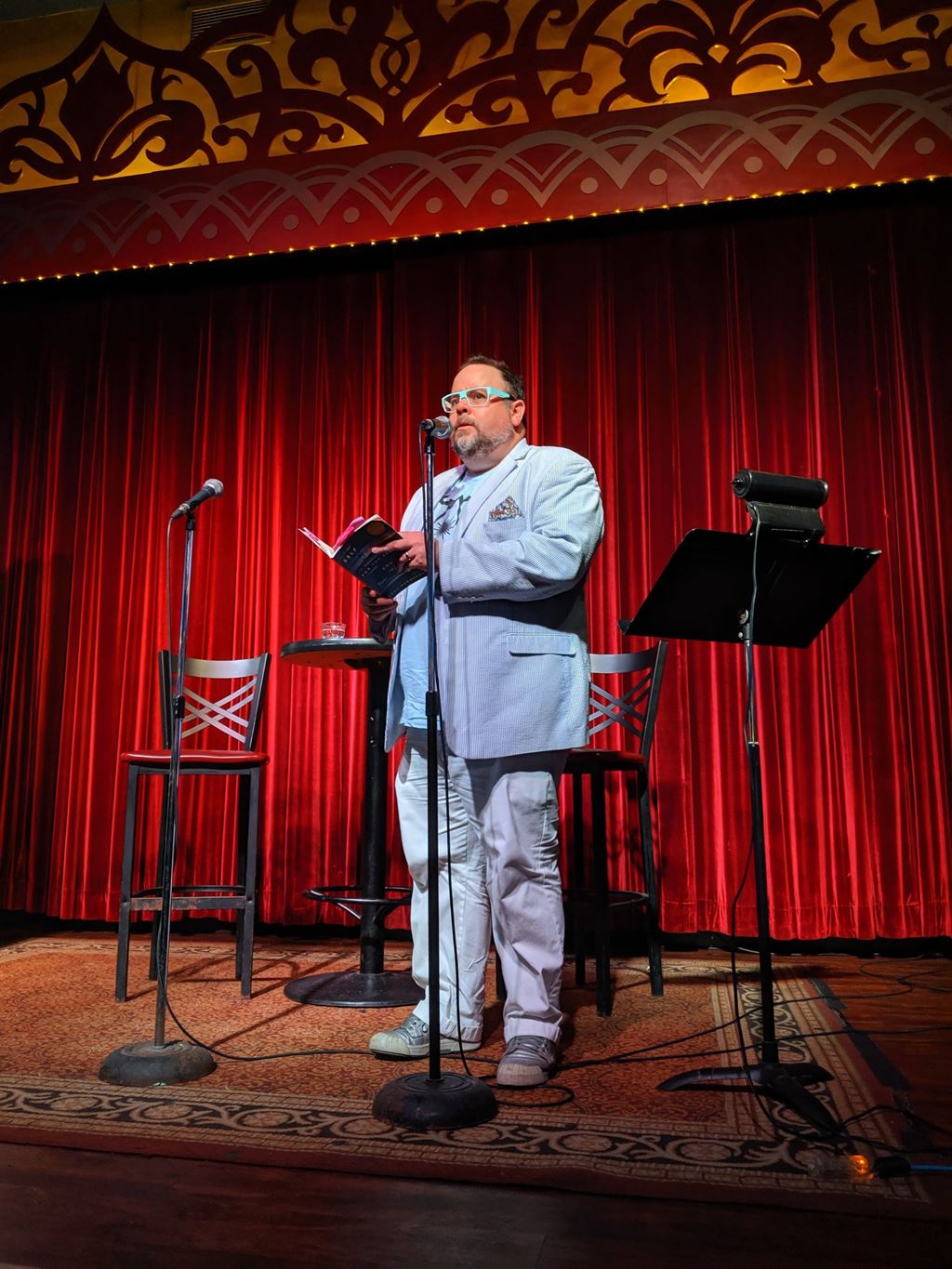 Bringing poetic licence into the classroom

On the night that Cherie Dimaline received a 2017 Governor General’s Literary Award for her young adult novel The Marrow Thieves, the best-selling author sat on a velvet couch in Ottawa’s Rideau Hall to give her aching heels a rest.

Moments later, when Paul Vermeersch walked by and stopped to congratulate her, Dimaline insisted that he take a seat as well.

“I told him to come and talk with me,” Dimaline says of her first encounter with the Sheridan Honours Bachelor of Creative Writing and Publishing professor. “He was clearly one of the most interesting people in the whole place.”

Years later, Dimaline still considers that conversation — which ended up lasting for hours — the highlight of the evening. “We spent the rest of the night talking about literature and the community and words and really appreciating the magic we were privy to as writers,” she recalls.

Professor ‘doesn’t conform to the norm’

Stories like that about Vermeersch come as no surprise to third-year Creative Writing and Publishing student Brianna Wodabek.

“Paul doesn’t conform to the norm. He really doesn’t. He’ll come into the classroom wearing his shiny silver shoes and his bright blue glasses, and he owns it. It’s as if he’s giving us visual permission to be ourselves, to be crazy, to just express ourselves and not care what other people think,” says Wodabek, a mature student who secured part-time employment with an Oakville publishing firm after just one year in the Creative Writing and Publishing degree program. “And his passion and his excitement is just so fun to watch. You can tell when a professor is engaged in what they’re thinking or if they’re just teaching it to teach it. Paul would give these lectures even if he wasn’t getting paid.”

The origin of Vermeersch’s fascination for writing — and creativity in general — can be traced back to his days as a youngster living in the Sarnia community of Bright’s Grove. As he grew up, so did the area around him, metamorphosing from a collection of cornfields, swamps, meadows, forests and parks into a network of subdivisions. Did that shape him and how he viewed the world? “How could it not?” Vermeersch asks rhetorically. “I’ve written a lot about that in the past. I’ve thought about it a lot. Sarnia is not a cultural hub. And I think I grew up feeling quite starved for the arts.”

“I think of myself as a poet, and all the other things I do are just a facet of that…Everything informs my poetry, and my poetry informs everything else.” – Paul Vermeersch

That passion has driven him ever since. “If fame and fortune and visibility are the reasons you write, I think you’ll be disappointed,” Vermeersch says. “I do it because I love it.” The visibility, then, has come as a byproduct. He has earned critical praise for each of his six collections of poetry (a seventh, Shared Universe: New & Selected Poems 1995-2020, is planned for next year); is the founding editor of Buckrider Books; edited Richard Harrison’s Governor General Literary Award-winning poetry collection On Not Losing My Father’s Ashes in the Flood (which explains why he met Dimaline that night at Rideau Hall); was mentioned by name in a Michael Ondaatje poem that appeared in a 2014 edition of The New Yorker; plays in a band with Toronto-based novelist A.G. Pasquella; sells his own paintings; and once taught at the English Language Teacher’s College of Slupsk in Poland.

Dimaline even selected an excerpt from one of Vermeersch’s poems, “Motel”, to serve as the epigraph in her newest book, Empire of Wild:

“It appears at the beginning of a very wonderful novel to set the tone, and the novel would be just as wonderful without any of my words on that page. It’s really just an honour for me. I’m benefitting from it more than Cherie is,” Vermeersch smiles self-deprecatingly, seeming unconvinced by Dimaline’s insistence that she selected the excerpt for her epigraph before knowing it was Vermeersch who wrote it. “He is just too humble to imagine that it settled into my ribs before I knew the words were his,” says Dimaline. “The ways in which he declared the joys of the mundane and the specifics of place, but within anonymity? I swooned. I am still swooning.”

Despite his wide array of talents, titles and achievements, Vermeersch doesn’t hesitate when asked how he defines himself.

“I think of myself as a poet, and all the other things I do are just a facet of that. When I’m making visual art, I’m making visual art as a poet. My work in publishing, editing, teaching— that’s all part of my practice as a poet. Everything informs my poetry, and my poetry informs everything else,” he says. “It all feels like part of the same vocation to me. And I think that being an artist of any kind includes passing along what you know in some way or another, as a mentor or a teacher or a member of a community, and preparing the ways for others to do what you do.”

That’s what appeals most to Vermeersch about teaching in Sheridan’s Bachelor of Creative Writing and Publishing degree, a program he first caught wind of more than a decade ago when he was a contract professor at the college. “This is a job I was trying to get for 10 years. I wanted to stick around and do whatever I could to be a part of it,” says Vermeersch, whose prior teaching experience was predominantly one-year contracts or leading classes that were required courses for other programs. “Watching our students learn and grow and develop creatively and scholastically has probably been the most rewarding thing in my career,” he adds. “When you have students who are here because this is the program they chose and it’s important to them and they want to be here, you can skip the stage of trying to get them to buy into what you’re teaching. You can just get to the nitty gritty, and it’s smooth sailing after that. And it’s easier for me to pass on my enthusiasm for things.”

The enthusiasm is infectious, Wodabek says. Especially when it’s delivered in the peer-to-peer fashion in which Vermeersch speaks to his students. “He makes us all feel like we’re on the same level. He doesn’t seem to feel like he’s above us, even though we see him as, ‘He’s Paul, he’s amazing’,” says Wodabek. “And he genuinely cares. He’ll send emails to check in on people if they’re sick or miss a couple classes, just to make sure they’re OK. You feel so supported, and it makes you want to do well just to make him proud.”

“…his passion and his excitement is just so fun to watch. You can tell when a professor is engaged in what they’re thinking or if they’re just teaching it to teach it. Paul would give these lectures even if he wasn’t getting paid.” – Brianna Wodabek

The rapport he’s built with his students was clear to Dimaline when Vermeersch brought his class to a launch event for Empire of Wild.

“I told them they were so lucky to have Paul as an instructor. And the thing was, they already knew,” she says. “They truly understood just how blessed they were because he created in them not only the inspiration for their own work, but gifted them with the kind of sight to truly recognize those small miracles of capturing the huge, unbridled magic of the world in these little geometrically-crafted words.”

Pictured at top of page: Paul Vermeersch, poet and professor of Creative Writing and Publishing at Sheridan, pictured at Lula Lounge in Toronto. Photo by Kevin Hardcastle.

Pioneers of pedagogy and practice: The origin and evolution of Canada’s first Athletic Therapy program

The year was 1972. Ontario’s college sector was in its infancy, with member institutions like Sheridan having just turned five...

Fifty years at the forefront of teaching art in motion

Some have called it the Harvard of Animation. Others refer to it as Disney North. One thing is clear: Sheridan...