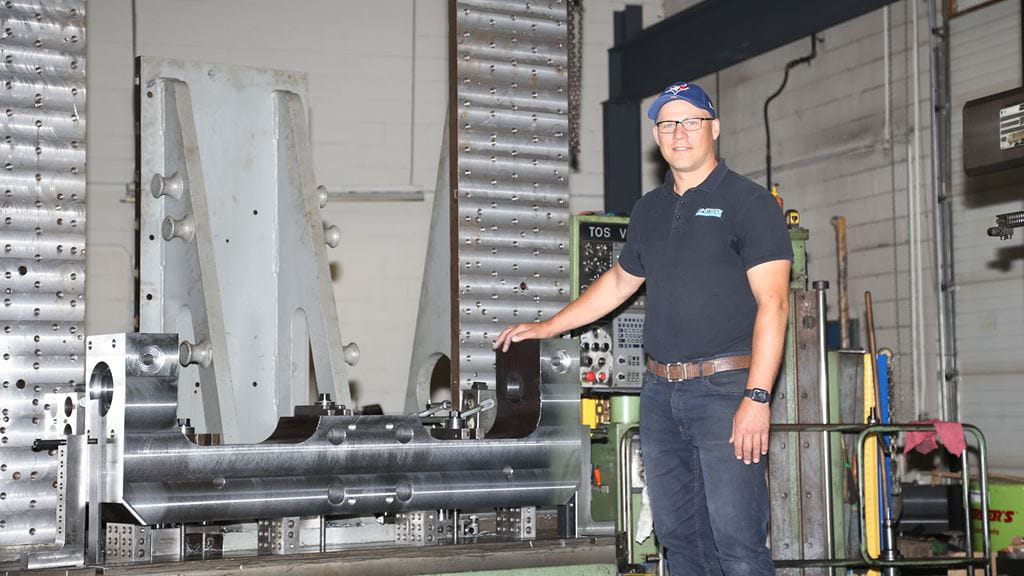 Kris Girdauskas (Tool and Die Maker Apprentice ’02) was a few months shy of graduation when he chanced upon a small shop. The owner was retiring and Girdauskas, who had always dreamed of running his own shop, saw an opportunity. He bought the 1,300-square foot one-man operation and started Re-Strike Machine and Tool Inc. – singlehandedly booking orders, machining and delivering the parts he manufactured on a few basic machines.

“It's just amazing what you can produce with manufacturing. There's a real satisfaction to making things, watching them come alive as it were, that you can't get elsewhere.”

Over the last 20 years, Girdauskas’ shop has grown to occupy 10,000 square feet of space in a prime industrial area of Mississauga. It’s a full-service machine shop, with an impressive array of equipment for milling, turning, welding and fabrication. Girdauskas, far from being the lone worker he once was, has 12 employees to help him provide precision-machining services to a wide range of industries, including automotive, food and beverage, construction and aerospace.

The joy of creating

Inside Re-Strike, there’s excitement as a die gets ready to be shipped off. There’s heavy equipment strewn around the shop. A 15,000-pound forklift and a 7.5-ton crane are overshadowed by another massive machine that towers above the rest. It’s an obvious source of pride for Girdauskas as he explains its features. “This is a TOS WHQ 13.8,” he says. “It’s a CNC boring mill which we installed just when the pandemic began. We took a bit of a gamble and went in for some bigger machining. This new addition to our business has proven to be a very good move and we’re very excited about that,” he says.

To Girdauskas, manufacturing is a passion and an art form, requiring its own unique skillset like any profession. “It's just amazing what you can produce with manufacturing. There's a real satisfaction to making things, watching them come alive, that you can't get elsewhere. Some people think about work as blue collar or white collar, but there’s nothing bad about getting your hands dirty,” he says.

Girdauskas found his calling early in life when in Grade 6, he visited the Western Technical College during a field trip with his class. “We were mentored by a high school student who taught us how to use the lathe, and I was inspired by this candleholder that we made,” he says. A few years later, when it was time to choose a high school, he joined Humberside Collegiate like most of his friends. However, the candlestick project at Western Tech was always at the back of his mind and in Grade 10, he made a switch and joined the technical college.

“Even in large workplaces, the jobs are broken down into different stages. At Sheridan, our projects took us through the full phase of building a die, as opposed to just machining.”

At Western Tech, he took all the courses he could in welding, electrical auto body, and machining. However, after graduating high school, he found it difficult to navigate the apprenticeship process and struggled before he found a position in a small tool and die shop. He then decided to join Sheridan to complete his tool and die certification.

Girdauskas says the education at Sheridan took him to the next level.

“Even though I had many technical skills, at Sheridan I learned so much more. At work, you're exposed to whatever your workplace offers you. Even in large workplaces, the jobs are broken down into different stages. At Sheridan, our projects took us through the full phase of building a die, as opposed to just machining. When you're first doing an apprenticeship, you're either drilling holes, grinding blocks, or machining. But Sheridan gave me the opportunity to see the full process, and get an understanding of the vocabulary and the technical parts of tools,” Girdauskas says.

“There was still some learning to do in terms of practical working, but it allowed me to feel comfortable in the workplace as opposed to getting completely lost.”

The learning at Sheridan removed the roadblocks he had been facing till then in his career. “I was able to take that (learning) back to the workplace. I was by no means a professional at that point, but I was able to understand what was being told to me and I could relate to some of the senior guys in the field. There was still some learning to do in terms of practical working, but it allowed me to feel comfortable in the workplace as opposed to getting completely lost,” he says.

Girdauskas’ confidence in Sheridan’s programs goes beyond his own experience. His very first employee at Re-Strike came from Sheridan and over the years, he has employed several alumni and has been relying on their skills and knowledge to build his business. “They (Sheridan alumni) are basically independent of me. They know where to go for answers and resources. They give me the ability to run my business and grow it,” he says.

Amanpreet Singh (Mechanical Engineering Technician ’14) has been working at Re-Strike for over three years, using his education in CNCs (computer numerical control) and designing courses to help Girdauskas. “Kris has a lot of experience and he’s a licensed tool and die maker. He’s always there on the floor, ready to help if we need it,” he says.

Dhruvil Patel (Mechanical Engineering Technician ’21) wasn’t able to have in-person learning at Sheridan due to the pandemic, but says that didn’t affect his career. After graduating in December, he found employment as a machinist at Re-Strike, using his education to help Girdauskas in his ambitious plans for the future.

Girdauskas has achieved much, but he is thirsting for more. “I now realize I should have dreamed bigger when I started out. I thought owning a shop was my final ambition and did not set a goal beyond that. But now, I’m pushing to go further and turn Re-Strike into a bigger business than what it is at the moment,” he says.