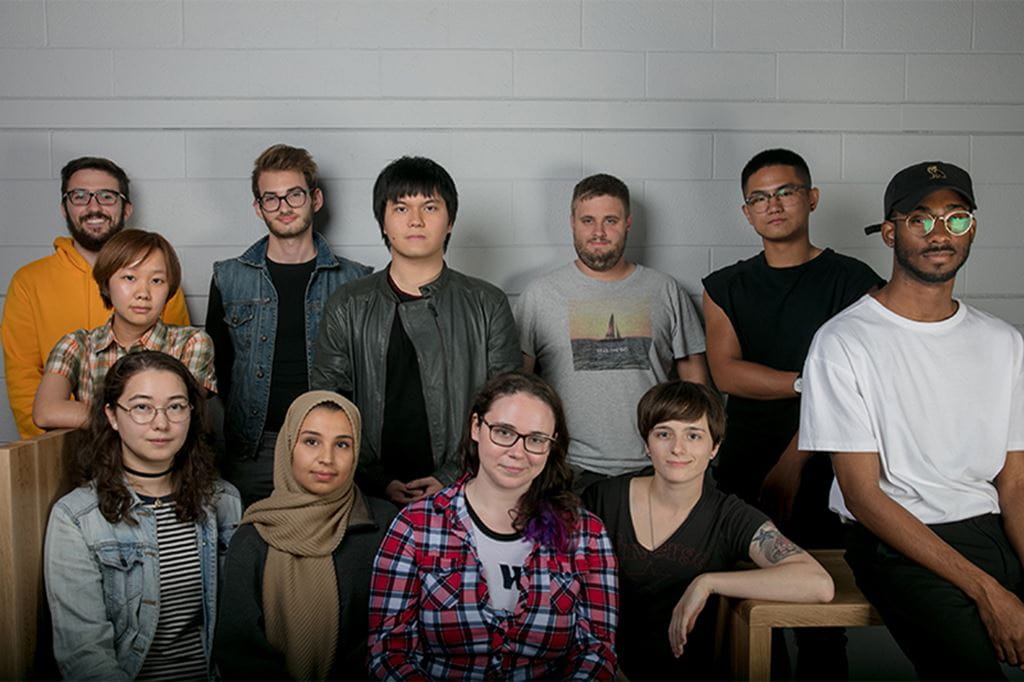 Bridging the gap between the classroom and the world of work

What is public creativity? How do spaces build community while respecting diversity of abilities and identities? A group of 11 Sheridan arts students explored these concepts this past summer through a Work-Integrated Learning (WIL) opportunity with Sheridan’s Public Creativity Studio, led by Sheridan’s Faculty of Animation, Arts and Design with assistance from Sheridan’s Cooperative Education (Co-op) Department and the Creative Campus Galleries.

Over 14 weeks, students worked on designs and prototypes for the SCAET building at the Trafalgar Road Campus. With its proximity to transit stops, and the Sheridan “S” prominently displayed outside its doors, some consider the SCAET building to be the “unofficial” main entrance to the Trafalgar Campus, which made SCAET the perfect location for a creative reimagining.

The project was funded in part by the Ministry of Training, Colleges and Universities (MTCU). Eligible degree students applied for internship opportunities, to work on this community building project.

“Sheridan has a very rich history of providing students with amazing work-integrated learning experiences. In Co-op alone, we’ve been doing it for over 30 years,” says Matt Rempel, Associate Dean, Career Education and Co-curricular Learning. “With WIL projects now being funded by federal and provincial governments, everyone is coming to realize that WIL is a valuable way to link academic learning with employability.”

“Sheridan has a very rich history of providing students with amazing work-integrated learning experiences. In Co-op alone, we’ve been doing it for over 30 years.” – Matt Rempel, Associate Dean, Career Education and Co-curricular Learning

The project kicked off in May 2018. For the first seven weeks, students worked under the mentorship of Sheridan faculty Susan Beniston, Sherry Lawr  and Cheryl Vallender.

Organized by faculty, students went on a field trip to the Philip Beesley exhibit at the ROM – Transforming Space where they had the opportunity to explore the future of architecture in an interactive exhibit along with the Iris van Herpen exhibit Transforming Fashion. On another occasion, students explored the Material ConneXion database with Librarian of Special Collections Patricia Buckley, the Art Gallery of Mississauga, the Living Arts Centre Gallery and the Creative Campus Gallery space at Sheridan’s Hazel McCallion Campus. 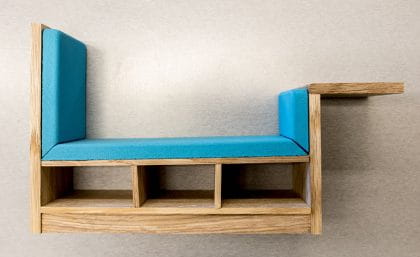 Students also attended talks by artist Cara Chellew, who spoke about hostile architecture in public spaces, where elements discourage tactile interactions with users, and by Sheridan employees Connie Chisholm (Principal of CoDesign and Professor in Bachelor of Craft and Design – Furniture Studio) who talked about designing for community spaces; Elijah Williams (Manager of the Centre for Indigenous Learning and Support) who talked about Indigenous lands, history and narratives both in art and generally; Wai Chu Cheng (Sustainability Coordinator); Randall Kapuscinski (Professor in Bachelor of Film & TV) who gave an experiential introduction to Virtual Reality, Augmented Reality, Mixed Reality, and EXtended Reality, and Myles Bartlett (Professor in Bachelor of Interaction Design) who presented on Inclusive Design.

In response to directives from the Oakville Fire Department, students had the opportunity to research and develop creative solutions for Sheridan so that their work would adhere to Fire Code regulations. On June 25, prototypes for a moss wall, a wayfinding kiosk and app, digital frames and displays for alumni and student artwork, and an accessible bench and media table were presented to Sheridan faculty, staff, and administration at the first pitch day.

“Every group was required to do the research to understand how to make a case for the project, who their stakeholders were, and we provided steady access to those stakeholders,” says Ronni Rosenberg, Dean of the Faculty of Animation, Arts and Design. “None of the work they were doing was in a vacuum. It was intended for their proposals to be very well integrated with Sheridan’s mission, objectives and strategic plan.”

“None of the work they were doing was in a vacuum. It was intended for their proposals to be very well integrated with Sheridan’s mission, objectives and strategic plan.” – Ronni Rosenberg, Dean of the Faculty of Animation, Arts and Design

Fourth-year Honours Bachelor of Craft and Design – Furniture student Melissa Merante led the design and fabrication of a bench and media tables for SCAET. “What was hard was also my favourite part of this project, which was stepping into a leadership role,” she says. “Because I was the one who could do most of the machine work and fabrication, it allowed me to step outside of my comfort zone. A lot of what I had taken for granted in my actual education ended up being the things I was challenged with during this real-world project.” The proposed media tables would have to be wall-mounted, and pull down to conform to fire regulations. The bench was also built out of solid wood, which, per directives from the fire department, also met fire code regulations and the Ontario Building Code.

Merante says working on the project “taught me to be really quick with my fabrications, it really honed my skills, and gave me a chance to work with these integrated groups,” she says. “I was amazed at how many things they could do in their fields. I got exposure to a lot of different ideas and thinking styles.”

Fourth-year Honours Bachelor of Interaction Design student Katlin Walsh worked primarily on the wayfinding kiosk and app, and also enjoyed lending a hand to the other groups. “I really liked seeing the projects being made and having a part in it,” says Walsh. In working on the digital kiosk, she says she had to consider how the design would integrate with the other projects that were being worked on. “I had to think of what the digital kiosk would look like in a physical space, does it connect with the furniture pieces, does it connect with the wayfinding and signage we already have at Sheridan, and trying to connect all those ideas.”

For the final seven weeks of the project, students worked with guest artist jes sachse, whose work focuses on public and private space, and how multi-abled bodies move within those spaces. During their time with sachse, students honed their ideas, and prepared for the final submissions. They presented their final pitches on July 31 and August 2.

Organized by sachse, students visited with guest artists Annie Wong, Francisco-Fernando Granados, Jessica Karuhanga and Golboo Amani, who talked to students about a variety of topics. These trips allowed students to learn about the world outside of Sheridan, and to consider their professional practice in the future, through discussing topics such as contracts, negotiations, and rates. “As an artist mentor, my role became someone who wanted to make connections for them not knowing where they were heading next, whether at other institutions, at Sheridan, starting a freelance practice, or both,” says sachse.

“It’s not a surprise that a project like this happened at Sheridan, and went so well,” continues sachse. “I think an environment like Sheridan allows for this kind of innovation to take place over a short period of time, and that’s what inspired me to provide that real-world mentorship.”

“I think an environment like Sheridan allows for this kind of innovation to take place over a short period of time, and that’s what inspired me to provide that real-world mentorship.” – jes sachse, Artist

“It broadens the whole idea of what is experiential learning. Students are really experiencing the real world as part of these studios,” says Rosenberg. “They are conducting research, participating in field trips, and they’re actually making things that add value to the public sphere at Sheridan,” says Rosenberg.

“When students get an opportunity to take what they learn in a classroom and apply it in a workplace setting through WIL, they’re not only able to express their creativity and practice their skills, but are being productive members of our communities and employment sector,” agrees Rempel. “From that lived experience, they can then come back to the classroom with a brand new perspective on the value of their education, and how what they’re learning in the classroom will contribute to their employability in the future.”

This year’s Public Creativity Studio was a success, and the work is continuing this fall and winter. Merante is currently building a prototype for a table that Sheridan can use in its public spaces that comply with stringent guidelines of the Oakville Fire Marshall.

Melissa Merante, Clair Fang, Rima Sarhan and Erisen Xu, and faculty members Susan Beniston, Sherry Lawr and Cheryl Vallender, along with sachse, are working on curating an exhibit of the students’ work at the Art Gallery of Mississauga, which will be presented in a group show called the Politics of Space from January 10 to March 15, 2019.

Trip to China and Australia ‘eye-opening’ for Music Theatre students

For five students bracing themselves for life after Sheridan, the timing couldn’t have been more perfect. Taylor Garwood, Bethany Monaghan…

Watch the opening number from In Real Life, performed virtually by the entire cast from Sheridan's Honours Bachelor of Music Theatre...

Bridging the gap between the classroom and the world of work

What is public creativity? How do spaces build community while respecting diversity of abilities and identities? A group of 11…