Shining a spotlight on mental health

Initiatives like Bell Let’s Talk are raising awareness of and sparking conversations about mental health. And in 2017, a class of 2nd year Journalism students at Sheridan continued that important conversation with “What U Don’t See” (whatudontsee.com), a website that looks at mental health through the eyes of Millennials. “What U Don’t See” began as a project for the students’ Data Journalism class, and has since become an award-winning website, after the class won a Canadian Online Publishing Award (COPA) for Best Interactive Story in the Academic category this past November.

Journalism alumna Christy Janssens, who worked as Project Coordinator, says hearing the participants’ personal stories was a powerful experience for the class. “Mental health is a really heavy issue, and it’s not easy to put yourself into the spotlight in general. What made me happy was being able to create a space for people to tell their story within the larger story, as a way of teaching through honesty,” she says. “Sharing your story in general, especially this type of story, takes a lot of courage. Those people coming forward were really brave and I appreciated every single one of their stories.”

“Mental health is a really heavy issue, and it’s not easy to put yourself into the spotlight in general. What made me happy was being able to create a space for people to tell their story within the larger story, as a way of teaching through honesty.” – Christy Janssens

Janssens says while Bell Let’s Talk and other initiatives have increased the conversation around mental health, it’s still something many people hide. “That’s why we called it “What U Don’t See”– it’s what you don’t see inside the Millennial mind. Mental health is getting talked about more now, but it’s still not something you always see on the outside,” she says. “It can be a hard thing to talk about or even approach sometimes, because it’s something that you can keep hidden. But generally I think that most people are either affected by it or know someone who is, and that’s why this project is important.” 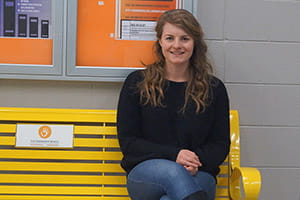 Winning the COPA Award was not only personally rewarding, but also gave a voice to the participants, Janssens says. “I was happy for the people who shared their stories, it was almost like winning an award for them.”

She hopes “What U Don’t See” will serve as both a positive resource for people struggling with mental health issues as well as a place to educate anyone wanting to learn more about this important topic. “I would hope it would be a way to make those individuals feel that they could connect with the stories and see that they’re not alone,” she says. “Even to see the resiliency of the people we interviewed, I think that could inspire them,” Janssens says. “And I hope the resources section gives them a starting point if they want to reach out, gives them a launching pad.”