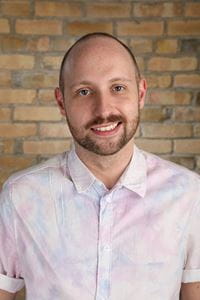 One of Dane Griffiths’ favourite memories from his time at Sheridan came in 2008 as he sat in The Marquee student pub at the Trafalgar Road Campus, watching the live broadcast of Barack Obama’s first presidential inauguration. “His whole platform was around hope, change and possibility,” Griffiths recalls. “Just being in that space and seeing the reaction of students and how transfixed everyone was, it was a moment in time that really stuck with me.”

It’s no surprise this is the memory that has remained with Griffiths. Hope, change and possibility have come to define his whole career since graduating from Sheridan’s Social Service Worker program in 2009. With over 13 years of experience in various sectors, including supportive housing, mental health, crisis intervention and now in HIV, Griffiths' varied experience and desire for impact in his work has brought him to his current role as the director of the Gay Men’s Sexual Health Alliance (GMSH).

As a province-wide network, GMSH works to improve the quality of sexual health care for all gay men in Ontario. GMSH takes the latest HIV research and best practices and translates them into practical tools that front-line providers and sexual health educators can use in their communities. Used as an imperfect short-hand, Griffiths says the alliance uses the term “gay men,” but that language is fluid depending on the audience for a particular project or resource. A recent example of this is the release of a video series featuring local Black same-gender-loving men sharing their experiences of sex, community, and care.

“Our alliance members are the front-line providers across the province,” Griffiths says. “They’re working day in and day out to get folks access to the things they need like PrEP [pre-exposure prophylaxis] or HIV testing, and we get to play a key supportive role in helping them do that and not feel isolated.”

GMSH also produces meaningful resources and campaigns designed to educate gay men directly, ensuring they have up-to-date information to care for their sexual health regardless of their HIV status. This became critical most recently during the global outbreak of Mpox that was affecting the community.

Their most recent campaign shines an essential and nuanced spotlight on Party and Play (PnP). It offers inspiring stories that are often not heard due to pervasive stigma on the use of substances within a sexual context. Griffiths says the goal is to reduce any of the harms that can be experienced and create a more supportive community dialogue on the issues that’s free of shame and blame. At the same time, the GMSH is training health and social service providers, including physicians and nurses, on providing PnP-related support and care.

Working from an operational standpoint as director has been a shift for Griffiths. His day-to-day work now includes program planning, fiscal management, multi-stakeholder engagement, and developing a cross-functional talented team of six.

This is much different from how his career with GMSH started—as an alliance member working for The AIDS Network in Hamilton. It was here, as an HIV Prevention Worker, he became more connected to his identity and says his involvement, “opened my eyes to the opportunity to serve the community that I belong to.”

His previous experience as a Social Service Worker also prepared him to provide a range of supports to individuals living with and affected by HIV, many of whom are living on the margins and experiencing challenges related to the social determinants of health.

“Holding space for that much pain when you're working with folks living on the margins of our communities is difficult, and I think so often, unfortunately, it’s not as valued as it should be.”

He credits the training for this challenging but necessary work to his time at Sheridan, especially the valuable practicum experience at the Canadian Mental Health Association’s (CMHA) Hamilton branch, which laid the foundation for his career.

“I look back to my time working in the mental health sector and particularly some of the crisis intervention work I was doing—it was so challenging,” he recalls. “Holding space for that much pain when you're working with folks living on the margins of our communities is difficult, and I think so often, unfortunately, it’s not as valued as it should be.”

His work with CMHA would continue long after his practicum, moving to their Simcoe branch for several years. During this time, he also worked in housing support on the Six Nations Reserve and as a Crisis Support Worker at the Barrett Centre in Hamilton.

Griffiths says extending himself into this plethora of important but emotionally-heavy work has helped make him a unique director for the GMSH. He can empathize with and wholly appreciate the complete spectrum of work alliance members are doing. He also uses his work to provide an energetic, joyful and dedicated workplace for current students to begin their Social Service careers—a task he says he is humbled to fulfill.

“It’s interesting, now in my role being in this leadership position, I get to bring on students here, which has been kind of an interesting evolution,” Griffiths says. “Trying to fill that same sort of mentorship role and helping young people early in their careers is just such a good feeling.”