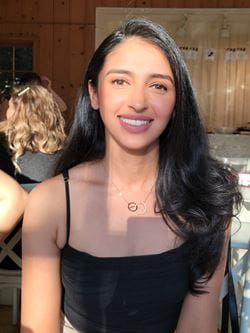 It took two years of persistent efforts for Ravleen Kaur (Social Service Worker ’18) to help a young woman finally escape her abuser and build a new life, away from the sordid underworld of human trafficking. With Ravleen’s support, not only did the 19-year-old, displaced from another city, find a house and a nurturing environment to live in, she also returned to school to complete her education.

She is one of the many victims of sexual abuse and human trafficking rescued by Ravleen, who works as Manager, Anti-Human Trafficking Program, at SAVIS of Halton – a not-for-profit organization with the avowed objective of turning around the lives of sexual violence survivors. “On average, it takes a woman seven attempts to leave her abuser. It’s a long process and even then, she will require years of counselling to address the trauma of her abuse,” says Ravleen.

The silencing of abused women

Hard work, but to Ravleen, each victim she helps is a win for women the world over who experience sexual abuse and trafficking. Each success is also a small victory for her own younger sister, who experienced assault at the age of 12. That horrific experience brought home to Ravleen the silencing of abused women around her, and the scale of gender-based violence, with little justice for victims in societies built on patriarchal laws.

“I was very focused. I wanted to help survivors of sexual violence and human trafficking because of my own experiences.”

Born to Indian parents in the United Arab Emirates, where she lived until she was 16, Ravleen witnessed first-hand the gender disparity leading to oppression of women and their inability to escape from the cycle of abuse and sexual violence. “In many instances, a woman needs eyewitnesses to prove that she’s been raped. The law makes it impossible for a rape victim to get justice,” she says. She also saw some of her teenaged friends sent to jail for something as innocuous as holding hands with a male friend. In India, where she spent three years as a high school student, brutal rapes and violence against women were all too common. Refusing to be a bystander, Ravleen decided to build a career that would address atrocities against women.

“I was very focused. I wanted to help survivors of sexual violence and human trafficking because of my own experiences. There were multiple instances within my own family structure where women were not allowed to have a voice. That's not something I wanted to be a part of. I can’t say I was a rebel, but I definitely couldn't stand it,” she says.

“Life in Canada is very hard for newcomers who are often in need of money and emotional support. They don’t even realize they are being manipulated.”

Soon after high school, Ravleen came to Canada to study in the Women and Gender Parity program at the University of Toronto. She also took up Criminology as a second major to understand the issues around gender and sexuality, as well as crime and the administration of justice. Even as she pursued her degree, she was aware that the path to her career goals really lay in Sheridan’s Social Service Worker program. “There was no hands-on experience at UofT. I had all the academic knowledge I needed but I lacked practical skills that would allow me to work in the field,” she recalls.

Ravleen joined Sheridan’s Social Service Worker program after completing her double major from UofT and in the second year, she did her practicum at SAVIS, where she had already been volunteering. SAVIS hired her as soon as she graduated in 2018. “I started off as a Sheridan student at SAVIS in 2016, went on to be a Crisis Worker, and then a Case Manager, Team Lead, and finally the manager of both the human trafficking program and the public education program,” she says. She now manages the human trafficking program exclusively.

“Our job is not to tell someone what they're going through, but to guide them into recognizing what’s happening to them and that it’s illegal.”

Compared to many other countries, women are better protected in Canada but they are still vulnerable to sexual violence and human trafficking. Ravleen says students, especially newcomers to Canada, can be an easy target for traffickers.

“Life in Canada is very hard for newcomers who are often in need of money and emotional support. They don’t even realize they are being manipulated by individuals, who initially shower them with expensive gifts but later call in those favours, or use compromising photographs and videos to push the women into sex trafficking,” she says.

To create awareness among students, Ravleen works with a team of public educators who reach out to students in schools, colleges and universities. “We let them know that they are not alone and that they have a voice. Our job is not to tell someone what they're going through, but to guide them into recognizing what’s happening to them and that it’s illegal. We are a feminist, anti-oppressive, anti-racist, very non-directive space,” she says.

While she works hard here in Canada and recently got her permanent residency, Ravleen has not forgotten what brought her here as an international student, or the goal she set for herself following her own traumatic experiences in a different part of the world. She wants to return to India and start a not-for-profit organization to help survivors of sexual and physical abuse.

“I'm making a difference here but this is an issue that is so widespread that I need to be doing more. It feels as if I'm never doing enough,” she says.” My journey doesn’t end here. It has just started.”