After spending more than a decade as a trainer at some of hockey’s highest levels, Brian Cheeseman thought he’d left the sport behind him last summer when he became Director of Sports Medicine and Rehabilitation for the Canadian Football League’s Edmonton Elks. 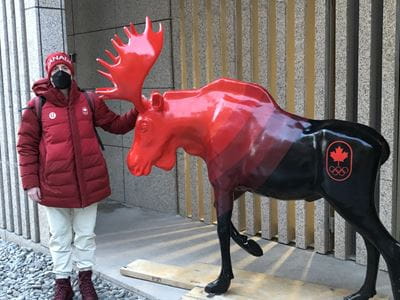 As it turns out, the best in Cheeseman’s hockey career was yet to come. The Sheridan graduate will realize a lifelong dream this month in Beijing when he dons the maple leaf at the sport’s pinnacle event — the Olympic Winter Games. “It has always been an aspiration of mine to be part of Team Canada at the Olympic Games, and to be able to do it as part of the national men’s team with Hockey Canada makes it even more special,” Cheeseman said last weekend from Davos, Switzerland, where the team is holding training camp in preparation for its Olympic opener Feb. 10 against Germany. “Although I now work in football, hockey is the sport that started my athletic therapy career, and to be able to return to the arena for this event is very humbling.” In addition to being the most prestigious event Cheeseman has ever worked, the Beijing Games will present unique challenges in ensuring athlete safety during the global pandemic. Fortunately, Cheeseman already has plenty of experience working in a ‘bubble’ atmosphere. He spent 66 days and nights inside the National Hockey League’s protected environment during the 2020 Stanley Cup Playoffs in Edmonton, and he worked in similar conditions during the 2021 world junior hockey championships and the past CFL season with the Elks. “These previous experiences have allowed me to become very comfortable in these types of environments,” Cheeseman said. So did his time at Sheridan, where Cheeseman earned his bachelor’s degree in Applied Health Sciences – Athletic Therapy in 2009 after completing his bachelor’s in Kinesiology and Exercise Science at Memorial University of Newfoundland. “My experience at Sheridan was top-notch. The instructors provided a world-class education in the classroom, lab, field and clinical setting,” said Cheeseman, who spent 11 years working with the Western Hockey League’s Edmonton Oil Kings before joining the Elks. “The practical hands-on experiences provided to students like myself allowed us to be prepared for anything and everything when we entered the athletic therapy workforce.”

In photo, Brian Cheeseman stands next to the fibreglass moose mascot standing outside Team Canada's accommodations in the Olympic athletes village in Beijing. Photo supplied by Brian Cheeseman.