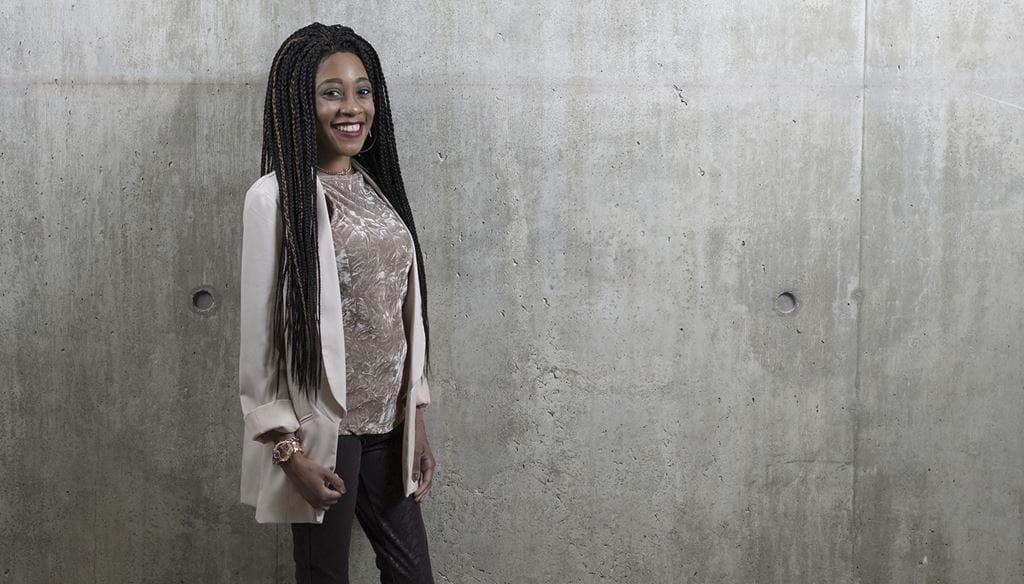 Sharing her story to end stigma

Ad-libbing in a television broadcast requires poise and confidence, something Sheridan Journalism student Muluba Habanyama knows well from her time in front of the camera. Drawing on that experience and feeling inspired by the speakers at a World Aids Day event in Mississauga in 2014, she went off-script in her closing remarks as emcee and shared with the audience a secret kept for 22 years of her life: she has been HIV-positive since birth.

Habanyama’s on-stage declaration was a moment of clarity in her young life; she was no longer going to let the stigma surrounding HIV/AIDS dictate her choices. “Stigma is a disease on its own,” she explains. “It prevents people from seeking out the supports they need.” Empowered by the positive response from strangers at the event, a few days later she posted a five-minute video entitled Feel No Shame to YouTube, further explaining her previous reluctance to speak out.

“Stigma is a disease on its own. It prevents people from seeking out the supports they need” – Muluba Habanyama

With this newfound courage she was quickly thrust into the spotlight – interviewed by the Toronto Star and CTV News, and honing her journalistic abilities for blogs like the Huffington Post, MTV’s Staying Alive Foundation and the website Too Damn Young. She also now sits on the Board of Directors for the Teresa Group, was Honourary Chair of the 2015 Scotiabank AIDS Walk for Life in Peel and received a Black Women Moving Forward Award for Advocacy.

But the path that led to this point in Habanyama’s life included much self-doubt and devastating times of heartache. She lost both her parents to HIV-related complications before she turned 19 and fell further into an isolated state of depression. To move on from that dark period she found purpose through education: her own studies in Sheridan’s General Arts and Science and Journalism programs, and sharing knowledge with others around HIV/AIDS.

Entering her final semester at Sheridan, Habanyama is not just more open about her story to those around her, she is using her experiences to foster a more open conversation around HIV/AIDS nationally and internationally, particularly with youth.  She explains: “As a journalist I’m regularly asking people to share their stories with me so I figure I should be comfortable sharing my story with others, especially if it will add to a greater and important conversation.”

“As a journalist I’m regularly asking people to share their stories with me so I figure I should be comfortable sharing my story with others, especially if it will add to a greater and important conversation” – Muluba Habanyama

In February 2016, Habanyama will be the first-ever National Youth Ambassador for the Canadian Foundation for AIDS Research’s (CANFAR) Kisses for CANFAR campaign. The campaign is focused on empowering youth with reliable information and tools in an effort to encourage safer and more informed decisions. As the face of the campaign, which runs through February 15, Habanyama is available as a classroom speaker and will be tweeting out her #smoochselfie posts to ‘help kiss HIV and AIDS goodbye.’ With ambition to continue her advocacy work while pursuing a career in journalism – and ultimately hosting a talk show – this soon-to-be graduate is truly embracing her role as a public figure.

The balancing act that comes with lending her voice to the HIV/AIDS conversation while completing her studies, sitting as a board member, and traveling for speaking engagements can present its share of challenges. “I used to always say ‘school comes first’ but my Sheridan program supervisor Nicole Blanchett-Neheli has to remind me that ‘health comes first,’” says Habanyama smiling. “If I take care of myself, I am better prepared to help others through my work.”

There’s a degree of vulnerability that comes with continually sharing her story but Habanyama stays motivated from the kind words from her supporters. “A man came up to me after one of my talks and said, ‘how are you so strong?’ It was one of those questions that sounds simple enough but I was taken aback,” she explains. “I don’t really know how I got here and how I’ve persevered, but it’s the path I’m on and I’ll keep fighting the good fight.”

On International Women’s Day in Ottawa, first-year Honours Bachelor of Film and Television student Julianna Corso took a seat in the…