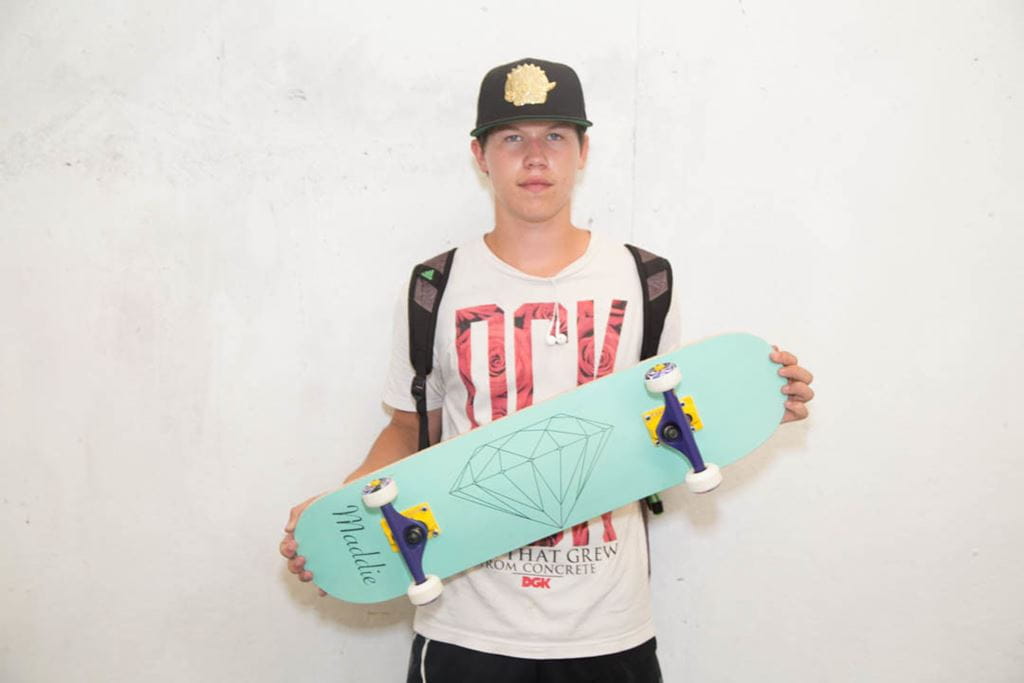 Build a skateboard and build a dream. That’s what nine Indigenous youth from Six Nations and Hamilton and Brantford did when they attended Sheridan’s fifth annual Indigenous Skateboard Camp from July 30 to August 3, 2018. Over five days of fun, creativity and inspiration, they built their own skateboards from start to finish in Sheridan’s Furniture studio, and created their own T-shirts in the Textiles studio.

The camp, which is open to Indigenous youth ages 14 to 17, began in 2014 as a partnership between Sheridan and Mohawk College. The following year, Sheridan continued the camp independently. The camp is a collaboration between Sheridan’s Centre for Indigenous Learning and Support, the Craft and Design program, and the Illustration program. The camp is facilitated each year by Connie Chisholm, part-time faculty member in the Furniture Studio. Janelle Guthrie, Textiles Studio Technologist, oversaw the T-shirt making in the Textiles studio. Students also learned design and graphics techniques during a session with Illustration professor Jesse DeNobrega. 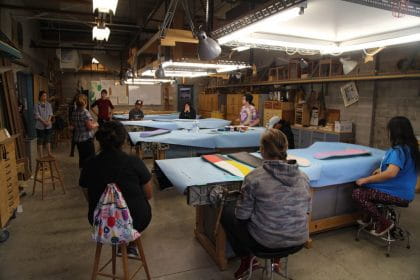 Elijah Williams, Manager of the Centre for Indigenous Learning and Support, says skateboards are a good choice for the camp because they’re popular with kids. “Six Nations recently built a skateboard park that was fundraised by students who wanted it in the community, so there’s a lot of interest in skateboarding among students,” he says.

Creating the skateboards and T-shirts from scratch also builds confidence, says Chisholm. “This workshop gives kids the opportunity to make something that looks really good, and gives them the confidence that with a bit of help, they can make something that is well-designed and well-made. Most of them come in and say ‘I don’t know how to make a skateboard, I’m not good at drawing’ – they’re intimidated,” she says. “Over the course of the week, this board and professional looking T-shirt appear, and they can say ‘I made this,’ and it boosts their self-confidence.”

On the final day of the camp, students were laughing, joking with each other, and riding their new skateboards down Sheridan’s halls as they waited for the bus to take them back to Six Nations. 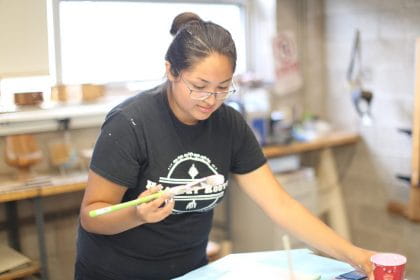 Jalen Thomas, 17, first attended Sheridan’s Indigenous Skateboard Camp last year on the recommendation of her aunt. She enjoyed it so much she decided to return for a second year. “The first year I attended the camp, I didn’t have a single clue how to make a skateboard. Coming here and doing the program, it gives you an inside look at how it’s made and how long it takes,” she says. “I enjoyed the creative process, and also seeing other people’s ideas and then seeing it all come together finally on the actual physical board. It’s really cool to see what people can create in five days.”

Fourteen-year-old Leah Jamieson says she decided to attend the camp on a friend’s recommendation. “It sounded like a really creative and interesting way to spend a week of summer,” she says. “It went better than I ever expected it to, and it’s been exciting to come back day after day.”

The camp is a great way to bring Indigenous youth together and spark their creativity, but it has a much larger purpose. Williams says that with only four out of 10 Indigenous youth graduating high school, the camp allows them to experience college life, receive a tour of Sheridan and plants the seeds of possibility for postsecondary education in their futures. 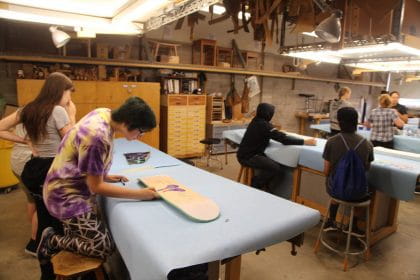 “These camps and workshops are vital to the success of Indigenous students, especially when they’re transitioning to postsecondary,” Williams continues. “Attending these kinds of programs gives them first-hand experience of what college life might be like. For us, it’s our obligation to ensure Indigenous students are successful, and also encourage them to pursue postsecondary education, because with the rates of students attending compared to non-Indigenous people, there is not an equal footing.”

“If there are only four out of 10 Indigenous students graduating high school, then I think colleges and universities should do everything they can to ensure that those who do graduate have equitable access to education opportunities after high school,” he continues. “We should do everything we can to foster their learning journey so that they’re successful when they graduate from college or university.”

“I hope the camp is a bit of an eye opener, so they really see what’s out there,” agrees Guthrie. “If you haven’t been to college before, you don’t know what types of programs are available. But with students being in the space, working with the tools, meeting the instructors, it’s eye-opening, and breaks down the barriers; it makes it more real and accessible.”

Williams says he loves seeing both the wonderful work the students create, but also how their attitudes about attending postsecondary education change throughout the week. “Overall, what continues to amaze me is how engaged students are in wanting to being here, and how their outlook on college shifts,” says Williams. “Before they come here, we have some students who are so shy, but at the end of it they’re chatting with people and even considering wanting to go to college or university.”

That was certainly the case for Jalen and Leah.

“These camps and workshops are vital to the success of Indigenous students, especially when they’re transitioning to postsecondary. Attending these kinds of programs gives them first-hand experience of what college life might be like.” – Elijah Williams

Jalen says she wants to study Illustration at Sheridan. “My first year coming to the camp, I had no idea what I wanted to do for college,” says Jalen. “Being at Sheridan for the five days showed me that people here want to see you succeed, and I just think it’s such a great school to go to. It’s a great place to explore your creativity.”

Leah says that while she’s not yet sure what path she’ll take, attending the camp at Sheridan has opened her to the possibility of studying the arts. “Coming to Sheridan has shown me that the people who are here love what they do, and that’s great. And it’s so important for kids to know that you don’t have to go in one direction,” she says. “There are so many different things we saw going down the halls and how many different ways you can see the world, it’s eye-opening. I am so excited to figure it out.” 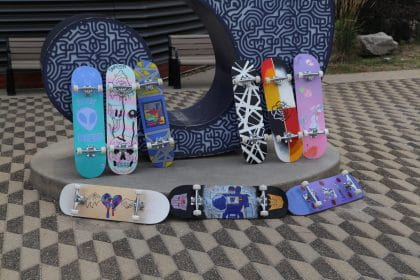 Pictured at top of page: Students who holding a skateboard made at the Sheridan workshop.