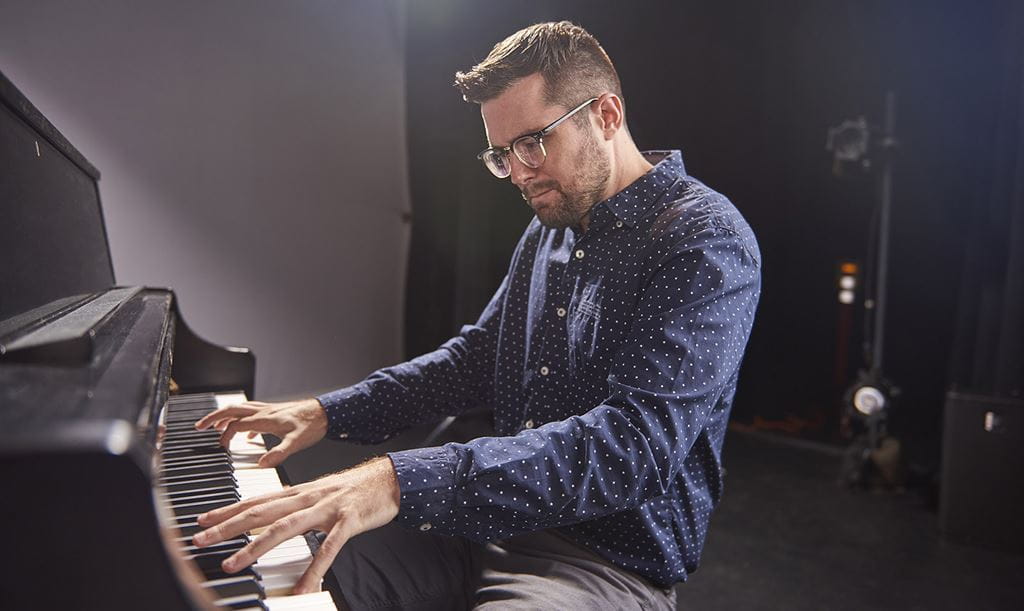 It takes Daniel Abrahamson less than three minutes to go from entering Macdonald Heaslip Hall at Sheridan’s Oakville campus to sitting down at the grand piano that has been set at centre stage.

For the next 45 minutes, he runs through a medley of classical musical numbers, popular TV show theme songs, and a selection of self-composed melodies, all while chatting amicably and cracking jokes with on-lookers in the theatre.

It’s clear that Abrahamson is comfortable being on stage – and he’s worked hard to find his place there. Abrahamson is an award-winning composer and lyricist, and a graduate of Sheridan’s Music Theatre program.

Growing up in St. Albert, Alta., he fondly remembers wearing out his VHS tape of Little Shop of Horrors from watching it repeatedly, and realizing his love of musical theatre after being introduced to Ragtime and Rent in high school.

Today, he cites a number of musical influences, such as Trey Parker and Robert Lopez (Book of Mormon), Jason Robert Brown (The Last Five Years) and Lin Manuel Miranda (Hamilton). With such a diverse and eclectic group of musicians as inspiration, it only makes sense that Abrahamson’s work has been equally varied. His musicals have told stories about office talent shows, murderous infomercial hosts, and a single girl surviving a zombie apocalypse.

Most recently, Abrahamson can be found working on Stars of Mars, his latest musical, one of four projects to be workshopped through Sheridan’s Canadian Music Theatre Project.

Stars of Mars takes audiences inside the first colony of Mars, where an amateur theatre troupe of astronauts, scientists and pioneers stage a musical to teach the first human born a Martian about Earth. It explores what a musical would look like on a planet where culture is lacking.

“There’s constant news about SpaceX and Space Force and NASA are planning Martian colonies,” says Abrahamson of the inspiration behind the musical. “I’d love to go, but I found myself realizing that they probably don’t need a composer on their mission. Probably not musicians, either. Or dancers, or painters, or any artists at all.”

Abrahamson took some time in between rehearsals to chat about his career and Canada’s musical theatre industry:

What first drew you to Sheridan?

A girl! No, really — I had been doing musicals with St. Albert Children’s Theatre (in Alberta) throughout childhood alongside my high school sweetheart. She was going to attend Randolph Academy for the Performing Arts in Toronto, and my parents thought a college might be more prudent. I auditioned for both Randolph and Sheridan, but fell in love with Sheridan right away, and of course out of love with the girl. 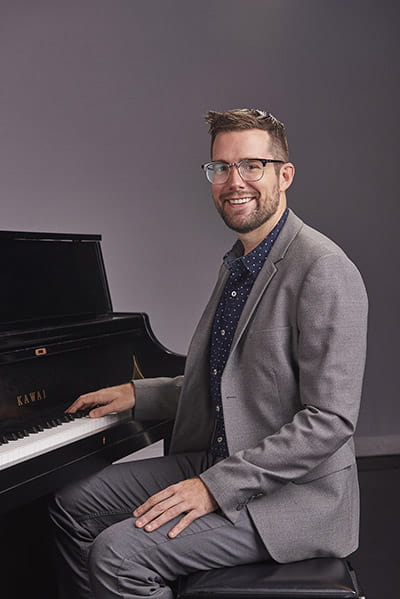 What were your next steps after graduation?

I performed, I wrote. My first gigs were mainly in music direction, which involved leading rehearsals and helping craft the musical tone of a show. I found it slightly uncomfortable as I didn’t have a music degree. But about a year after graduating, I self-produced Funny Business (2007) at the now-defunct Diesel Playhouse in downtown Toronto. We did over 125 shows and were published through [New York-based musical and play publisher] Samuel French. It was an exhausting and incredible experience that taught me so much about developing and producing a musical.

How were you able to narrow your focus and decide that writing was your calling?

I don’t know if I have — I love performing. I love feeling the energy exchange with the audience, discovering moments in the rehearsal hall, opening night nerves and closing night debauchery… I’m not sure I could ever stop being on stage. Currently though, my writing and producing seem to be in the most demand.

How were you able to narrow your focus and decide that writing was your calling?

I don’t know if I have — I love performing. I love feeling the energy exchange with the audience, discovering moments in the rehearsal hall, opening night nerves and closing night debauchery… I’m not sure I could ever stop being on stage. Currently though, my writing and producing seem to be in the most demand.

How did Sheridan prepare you for a career in musical theatre?

Sheridan gave me the skills I needed to get into the room and develop a professional approach to the work. I still admire and collaborate with the teachers and friends I met there. I had the opportunity to perform in workshops of new musicals, be the lead in a big show (Music Man, 2005), have my new musical developed and produced, play in a band, have my songs arranged and played by a band, write music for a Shakespearean play…the list goes on and on. These experiences let me know where my passions were and where I might be useful to the industry.

What do you wish you had known when you graduated?

I wish I’d known how long it can take for good work ethic, relationships, and leadership to pay off in this business. Classmates of mine who (danced or sang better than anyone else) would be immediately fought over and placed in regional theatres and the big festivals.

It’s trickier for young principal actors, and trickier still for creators. I wish I could tell past Dan to chill, keep taking class, work on his ideas, don’t compare himself to others, calculate the cost and pay it. I think mentorship programs like the Leg Up Alliance can play a crucial role in helping young artists find their way.

When it comes to Canada’s musical theatre scene, how has the opportunity for young players to succeed changed from when you graduated to now?

There was a gap between the thriving new musical scene in the late-’90s and what it is today. After I graduated and was out creating, I’d gather with other writers and tone was dismal — there was no money, no opportunities, no big shows and no reason to create.

I’ve watched and, in my way, helped cultivate a different landscape today.

For example, the Canadian Musical Theatre Writers Collective helps connect creators, teaches classes about craft, and puts on shows celebrating Canadian composers. The Musical Stage Company offers a prize every year to promising musicals to get put on at Toronto Fringe. The Aubrey and Marla Dan Fund helps develop ideas, and produced a (beautiful) new Canadian musical last year that’s on a rocket to success.

What does it mean for your musical to be workshopped through CMTP?

I was expecting a lot, and it’s twice as good as I expected. CMTP producing artistic director Michael Rubinoff has incredible vision, passion, drive, and taste. The opportunity he’s given me to present work alongside artists I admire such as Kevin Wong, Britta Johnson, Sara Farb, Nick Green, Paul Sportelli and Jay Turvey is just about the biggest endorsement I’ve ever received as a creator.

In my room, it’s thrilling to create with the deeply funny and generous Ashley Botting. Paul Moody, our musical director, is a trove of talent and great ideas, and Steven Gallagher is probably one of the best directors and dramaturges of new musicals in Canada — maybe the world. I can’t wait to arrive at each rehearsal day, and I’m bummed as each day ends. I would gladly do this meaningful work every day of my life until I drop dead atop the piano. None of that is hyperbole.

How do you feel your writing style has changed or developed over the years?

I’ve recently started at the BMI Lehman Engel musical theatre workshop in New York, and it’s definitely helped my lyric writing. Good musical theatre lyrics should generally be characters trying to convince someone of something. This keeps things objective and tactic based, as opposed to summarizing ideas. Musically, I’m taking more risks. I definitely come to musical theatre as a songwriter, but I’ve been experimenting with longer and bolder forms — more dissonance and different scales. I really push myself to do something new each time, even if I’d be the only one who knows I’m repeating myself.

“I’m very blessed in my life to have so many opportunities to chase my passion and develop as an artist, and forever grateful for Sheridan setting me on that course.” – Daniel Abrahamson

Where do you find your get your inspiration/ideas?

Conversations with people, eavesdropping, travelling…my favourite movies and books. I often get an idea for a story from another fictional work, but then I immediately shift to research mode and learn about a subject as much as I can. I think this helps the writing become authentic. I think it’s also important to look for a personal, emotional grounding in my own life. In Stars of Mars, for example, there’s a mother/daughter relationship that really interests me. Girl’s End (2015) was about coping with a life alone and Funny Business (2007) was about people working together and getting along.

You’ve talked a bit in the past about whether it’s better to be a jack of all trades or a master of one medium when it comes to musical theatre – how has your philosophy on that changed?

By spreading my skill set wide, I’ve definitely had to wait longer for each of those skills to blossom. Colleagues of mine who were more specialized had more immediate success — I had to find my own way a bit more. But I love my career. I love playing music and getting on stage with other actors and the audience. I love staying up through the night getting everything right in (music notation software) Sibelius and I love laying on the couch with co-writers and blue-skying a story. We’re artists and we must follow our passions.

The second I don’t love something, it naturally falls away. I’m very blessed in my life to have so many opportunities to chase my passion and develop as an artist, and forever grateful to Sheridan for setting me on that course.

This conversation has been condensed for length and clarity.