In 2009, Alan Dick sat at in his office in Cleveland, Ohio, watching the snow fall, and wrestling with the news that, the next morning, the aluminum company he served as an Executive Vice President for would be filing for bankruptcy. His was one of many firms hit hard by the economic recession of 2008, and declaring bankruptcy meant the company’s creditors – many of whom he called friends –  would go unpaid. “I remember a surreal feeling, thinking: I can’t believe I work for a company that’s filing chapter 11. How did this happen?”

Dick played a crucial role in helping the company emerge from that black night in just 14 months. Looking back on it eight years later, he’s philosophical about how turning the company around served his career. 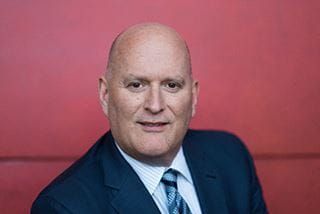 “As a senior leader, the more experiences you’ve gone through, they give you some street credibility,” he says. That’s a lesson he learned to appreciate early on when he was a student in Sheridan’s marketing program. “One of the things I liked about Sheridan – it wasn’t taught by a bunch of academics. It was actually taught by people who had worked in the field. It wasn’t taught by book-smart people who have never had to invest in the markets or had to fire people.”

Today, as the Senior Vice President of Global Business Services and Integration Management at Jacobs Engineering Group in Dallas, Texas, he relies extensively on that real-life experience to earn the trust of his colleagues. “I came in with a servant attitude – I’m in a corporate function, not on front line,” he says of his management style. “I worked with (employees) in the field, travelled to them. All of those things have helped me overcome the fact that these are lifelong engineers who have worked in the field, and I have not.”

Dick traces his hands-on approach to business to his time at Sheridan. After graduating in 1985, a fellow Sheridan grad hired Dick for a sales job at Pechiney, a Paris-based aluminum company. Throughout his career, Dick says he benefitted from mentors who gave him the opportunity to take on new challenges. “They taught me what I did not know, and took a chance and gave me an opportunity. I have tried to do that for other people. Some people have the right attitude, work ethic and ability – you have to let them strengthen their wings when they’re not quite ready to fly.”

He also took stock of how he could strengthen his own knowledge, and in 2001 he earned his Executive Master’s in Business Administration. He says it gave him a better understanding of the theory of business, and the financial drivers of decision making. But even after his wealth of experience, he still looks back on Sheridan as a key part of launching him into his current success.

“Often times your success was based on the work of the team,” he recalls. “So the ability to work with others, to motivate others, to get other team members to carry their weight, to be accountable to a team and do your part. Those were all things that were very pragmatic at Sheridan … it was a good preparation for how real life actually works.”