You don’t know what you don’t know. After nearly a decade in the financial services sector, Omer Jamal still buys into this theory.

“I might have experience, but there are many people who have more experience than I do,” says Jamal, who worked for five years as an analyst for banks and government organizations before founding Fortuna AI — a business that helps financial advisers attract new clients through the use of artificial intelligence-powered digital tools — in 2017. “When you’re an entrepreneur, you’re the brains behind a lot of things. The chance to speak to other entrepreneurs, particularly successful ones, gives you a second set of eyes on your business and leads to a more granular focus.”

Geoff Hogan couldn’t agree more. The Sheridan Computer Science Technology grad says he made more than his share of missteps on the way to building his own software company, even though the overwhelming success of that company allowed him to semi-retire before the age of 40. “I don’t think there’s enough paper in the world to write down all the mistakes I made when I started my company,” Hogan chuckles heartily. “There are no right or wrong answers when it comes to entrepreneurship, and I’m glad I built my company my way. But at the same time, there were many painful lessons I definitely could have avoided if I’d had a strong mentor to talk to.”

Today, Hogan is that mentor he wishes he had access to as a young entrepreneur — and Jamal has been one of his mentees. The two met in March at Sheridan’s Entrepreneurship Discovery and Growth Engine (EDGE) innovation hub at Hazel McCallion Campus, where Hogan currently serves as a resident mentor. 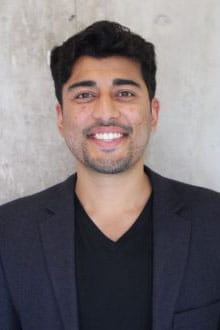 “The chance to speak to other entrepreneurs, particularly successful ones, gives you a second set of eyes on your business and leads to a more granular focus.” – Omer Jamal

Jamal’s initial intent was to leverage EDGE’s free office space and other resources, but that plan was quickly foiled when COVID-19 forced the closure of Sheridan’s physical campuses. Fortunately, Jamal still had remote access to Hogan and other EDGE mentors as he rolled out a new video tool designed to increase response and conversion rates in financial advising firms’ online marketing efforts. “I had quick conversations with Omer regarding placement in the market and the cool technology his company had come up with,” Hogan says. “It’s what we like to see — disruptive business ideas, bringing change to an industry that traditionally hasn’t liked change, and showing how it can be better.”

“We were a business with an established client base, but this was a new product that we’d initially intended to launch at the end of the summer. It’s like having the ability to go door-to-door on the Internet, and COVID-19 accelerated our plans,” adds Jamal, whose business has seen a “massive spike in demand” during the pandemic as companies became more reliant on virtual communication. “Geoff was instrumental in connecting us with the right people to help us get this off the ground.”