From online platforms that give members of young, underrepresented communities a place to come together and raise their voices, to businesses launched as a means to stand up against racial injustice: in less than one year, 11 youth-led entrepreneurial ventures have created the building blocks for equity, social justice and inclusion, thanks to the Social Impact Catalyst powered by RBC Future Launch, run by Sheridan’s entrepreneurship hub, EDGE.

Many of the ventures – 80% of which are led by women, and 65% by members of racialized communities – are rooted in their founders’ own experiences with systemic anti-Asian or anti-Black racism, and their subsequent quest to create more equitable communities.

Launched in early 2021 with the support of RBC Future Launch, the Social Impact Catalyst powered by RBC Future Launch offered support to ventures with a focus on improving equity, inclusion and justice in our communities. The 20 entrepreneurs, all of whom are within 15-29 years of age, joined the program for a 14-week incubation period. They received a $2,000 honorarium, access to a supportive virtual community of peers, networking opportunities, expert mentorship, and assistance to promote their ventures. This October, EDGE will celebrate their success and help promote their ventures during the first-ever Youth Changemaker Summit. 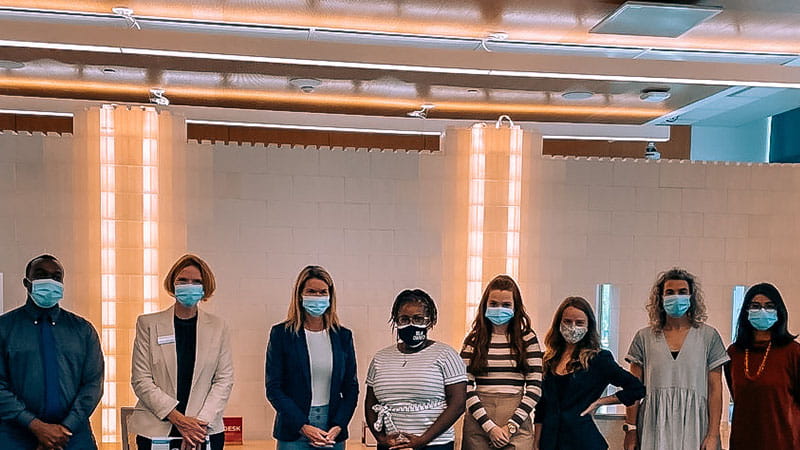 Ashleigh Montague, founder of Blk-Owned Hamilton, presented her successful venture to Minister of Colleges and Universities Jill Dunlop during her recent visit to Sheridan College.

“The Social Impact Catalyst Powered by RBC Future Launch provides opportunities for talented youth entrepreneurs and changemakers to be a part of EDGE's programs and supports, and join an amazing community,” says EDGE Director Renee Devereaux. “Hearing these founders speak about their ventures, and learning about the progress they make during, and beyond, the program, gives me great hope for the future.”

“Hearing these founders speak about their ventures, and learning about the progress they make during, and beyond, the program, gives me great hope for the future.”

The Social Impact Catalyst powered by RBC Future Launch program will build on its success by welcoming a third cohort of founders in January 2022. This cohort, which is accepting applications between October 12 and November 5, 2021, will focus on ventures that address climate change and environmental sustainability.

Here’s a brief look at the work of the young entrepreneurs who have already begun charting the path to a more equitable society:

After the May 2020 police killing of an innocent Black man George Floyd on a Minneapolis street, Sheridan graduate Ashleigh Montague (Project Management ’16) and her sisters Abigail and Alexandria wanted to do something more than post black squares on social media as a gesture of solidarity with protestors. They decided to channel the outpouring of support for the Black community that followed the incident into affirmative action by generating a list of Black-owned businesses which the community could support with its purchasing power.

The sisters launched BLK-Owned Hamilton on Instagram and the website, blkowned.ca, to promote Black-owned businesses and entrepreneurs in the Hamilton, Niagara and Brantford regions – showcasing everyone from restaurant owners and hairdressers to jewelry makers and fitness instructors. Their online directory currently lists over 160 Black-owned businesses and the Instagram account has earned over 7,000 followers, thanks to the RBC funding which allowed them to hire social media specialists to boost their reach.

BLK-Owned is revitalizing the community and putting Black-owned businesses on centre stage in real life, too. Recently, it collaborated with Whitney McMeekin, owner of Girl on the Wing, and the City of Hamilton to host a successful pop-up market for Black-owned businesses at Pier 8, Hamilton’s Bayfront area, and preparations are now underway to hold a holiday pop-up market in Hamilton.

Access to the RBC-funded program, which in addition to finances also provided them with learning, mentorship, and community supports, helped these ventures to expand their mandate. They are now networking with other purpose-driven organizations to strengthen the supports available to Black-owned businesses. “The ultimate goal is to make Black-owned businesses sustainable,” Ashleigh says.

Ashwini Selvakumaran decided to set up the Brown Citizen Circle (BCC) after one of her university professors discounted her lived experience as a young brown woman who grew up in North America, often dealing with stigmatization and name-calling. “It invalidated my life and my story as a young woman of colour. Unfortunately, this remains a reality for various people of colour in Canada where we are always told to speak out against racial injustices, but remain rejected for sharing our stories of racial bias,” she says.

Together with co-founder Mohammed Ali and a group of eight other BIPOC members, Selvakumaran launched BCC, a platform for BIPOC youth with a special focus on underrepresented Brown voices across Canada (Black, Indigenous, and South Asian), to help them vocalize their lived experiences through events and workshops.

In search of financial support and mentorship, Selvakumaran joined the Social Impact Catalyst powered by RBC Future Launch. Over the short period of one year, she has been able to carve a niche for the BCC in the social justice space. In August 2021, the BCC held its inaugural youth social policy case competition, Bridging the Gap, with Severn Cullis-Suzuki, an ‘intergenerational justice’ activist and daughter of renowned environmentalist David Suzuki, as the keynote speaker. The event was targeted toward mobilizing BIPOC youth to analyze the COVID-19 response and the impact of racialization in Canada, and to create their own change-making social policy solutions.

“We funneled the funds we received from RBC Future Launch into organizing the youth competition. The EDGE team was also instrumental in getting us secondary grants from other institutions by helping us with our grant submissions,” says Selvakumaran. Earlier in July, the fledgling organization successfully hosted another event, Uncovering the CAP: Climate Activism Panel, featuring four climate activists from the BIPOC community, to initiate an open dialogue on the impact of “environmental racism.”

Emma Chen set up her online beauty shop for Asian women, Ikigai, at a time when the Asian community was facing hate crimes in Canada and the world. She wanted to celebrate Asian beauty by providing easy and cheaper access to products used by women in countries such as China and Korea. “When the coronavirus broke out, there was an exponential increase in hate crimes against Asians. Ikigai was my coping mechanism. I wanted to embrace the Asian culture and Asian beauty. It’s like when you are locked in an island, you want to reach out to a piece of your culture,” she says.

“People from the Asian culture can’t find the products they use in the beauty sections of Canadian stores. As someone who has always loved Asian beauty methods and skincare, I wanted to make these products available and I created Ikigai, an online beauty shop on Instagram to help my community embrace Asian skincare, makeup and accessories,” Chen says.

“A passion project such as Ikigai would not have been possible without the funds and resources from RBC and Sheridan.”

With help from the Social Impact Catalyst powered by RBC Future Launch to grow her venture, Chen has just made her very first wholesale purchase of Asian beauty products to sell through Ikigai. “A passion project such as Ikigai would not have been possible without the funds and resources from RBC and Sheridan,” she says.

The Defiant Movement – A venture by Maheen Iqbal
@thedefiantmovement

Founded by a group of Canadian high school students in 2019, The Defiant Movement is a digital magazine and an online community for teens and by teens. It provides young people with a platform to discuss issues around social justice or share opinions on subjects ranging from politics, climate change, race and gender to wellness and poetry. In its short existence, it has already been recognized for its youth-focused community projects and has been awarded a certificate of recognition from Prime Minister Justin Trudeau. It has also forged partnerships with the United Nations and the Red Cross.

The support from the Social Impact Catalyst powered by RBC Future Launch has provided stability to the magazine. The funding, says Founder-Editor Maheen Iqbal, helped Defiant renew the magazine’s digital website and domain, and its Instagram account recently reached a new milestone of 19,000 followers.

“Throughout our substantial growth, we have continued to remain true to our original mission of amplifying young voices and believing fervently in our generation's ability to evoke change through dialogue and shared resources,” says Lehan Shaikh, the magazine’s Assistant Managing Editor.