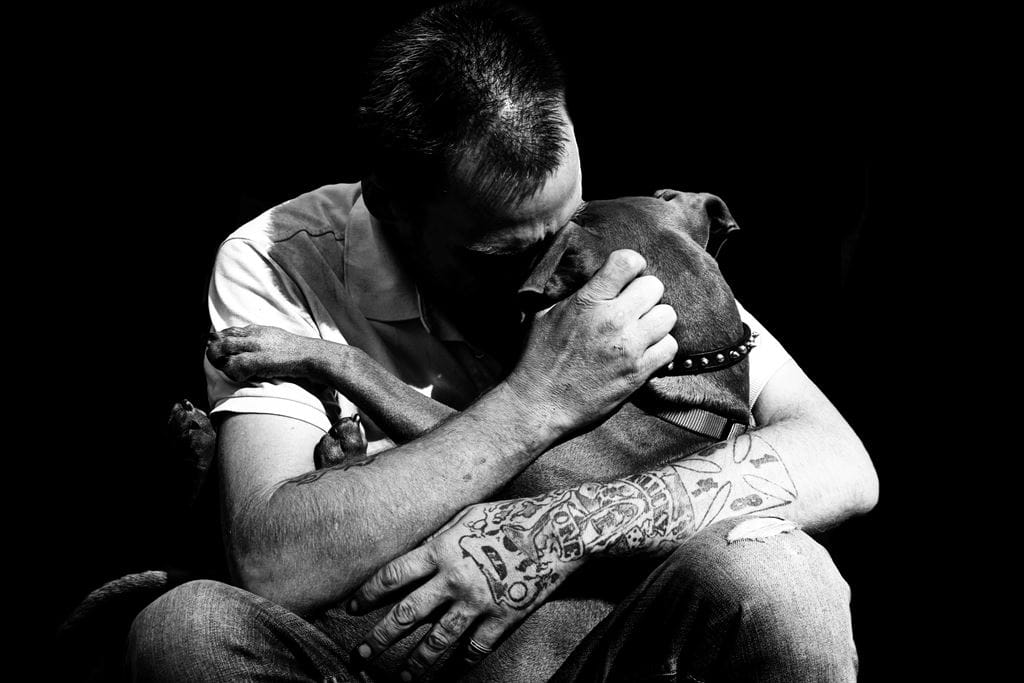 Leah den Bok had a marked advantage heading into an assignment for a second-year photography class at Sheridan. “50 strangers” challenges students to capture 50 photos of people unknown to them. It’s an exercise in portraiture, working in unmediated conditions and interacting with unfamiliar subjects. The resulting photos can become captivating portfolio pieces.

Twenty-year-old den Bok already has a trilogy of published books of portraits to her name, which feature people she’s encountered on the streets of major cities around the world who are experiencing homelessness. These works, titled Nowhere to Call Home – Photographs and Stories of the Homeless, were a labour of love that started with the help of her father when she was in high school. Proceeds from sales of the books benefit community organizations. 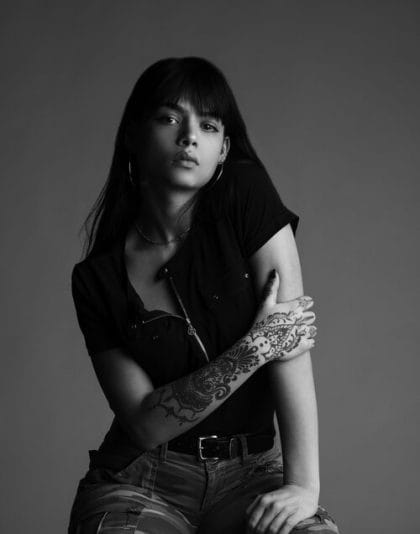 Now, during the COVID-19 pandemic, den Bok has continued her black-and-white portrait series to spotlight the disproportionate challenges faced by people experiencing homelessness. A lack of access to personal protective equipment, clean water and shelter spaces put people at an increased risk. These photos are garnering attention around the world.

Turning an interest into a career

A childhood fascination with photography led den Bok’s father to purchase a DVD course for her, taught by Joel Sartore – the renowned National Geographic photographer. den Bok had been dabbling in photography; taking photos of flowers, animals and children in her neighbourhood. Her father, an artist, noted her artistic inclinations and wanted to encourage her to explore photography further. After she completed the course, he sent her photos to Sartore, sparking a mentor/mentee relationship that continues to this day. “Joel told my father that portraiture is where my strengths lie and to seriously consider pursuing photography as a career,” says den Bok. “I was shocked to hear this and decided to use money from my paper route to buy my first professional camera.”

Growing up in Collingwood, Ontario, den Bok had limited exposure to people living on the streets and was admittedly unsure about her father’s suggestion to ask strangers if she could take their photo. However, after a few positive encounters and overcoming her own pre-existing biases toward people who are homeless, she realized the power that a photograph can hold in capturing the human experience. 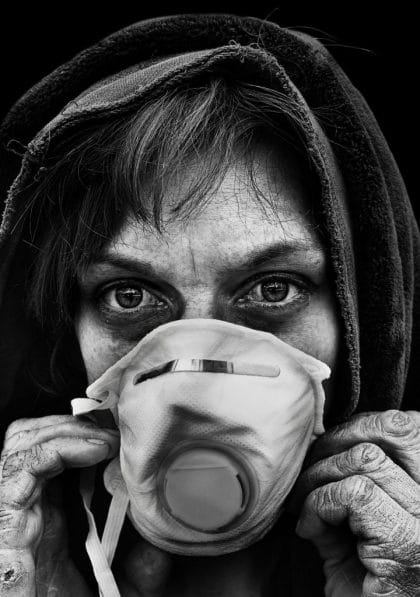 One of the photographers she most admires, Manchester-based Lee Jeffries, has taken photos of people experiencing homelessness for many years. Drawing from his aesthetic and Sartore’s signature use of a black and white backdrop, she adopted a similarly minimalist approach. “I want the focus to be on the individual and their expressions,” she says. “This way I can capture gestures and details of their faces that help to shed a light on their experience.”

While photographing people on the streets, den Bok and her father, who often accompanies her, get a piece of the subject’s life story through their brief interaction. These have been included in the series of books. Each person who participates is given $10 for their time. “Occasionally people decline but eight of the 10 people we ask welcome to the idea,” she says. “We’ve met some really engaging people through this work.”

Publishing three books of photographs have yielded varied opportunities for den Bok. She’s held multiple exhibitions of her work, spoken to 40,000 people at WE Day events alongside Harry, Duke of Sussex and Kofi Annan, the former Secretary General to the United Nations, traveled around the world for speaking engagements, won numerous awards including the Ascend Rising Star of the Year Award and has been featured in a CBC The National documentary.

Pursuing a post-secondary education became the best next step for the nascent photographer upon realizing that employment opportunities would be improved with a deep dive into the discipline over four years of study. Growing up only a couple of hours from Sheridan’s Trafalgar Campus, she knew of the college’s strong reputation for teaching photography and visited its studios before accepting her offer.

“I want the focus to be on the individual and their expressions. This way I can capture gestures and details of their faces that help to shed a light on their experience.” – Leah den Bok

“Before going to Sheridan, I almost felt like it was luck that I was doing so well with photography,” says den Bok. “Studying it has taught me editing techniques and how to properly take care of, process and organize my photos so they can exist in different formats.” She’s added many of her Sheridan professors, who bring a range of current industry experience to their classrooms, to her list of mentors. 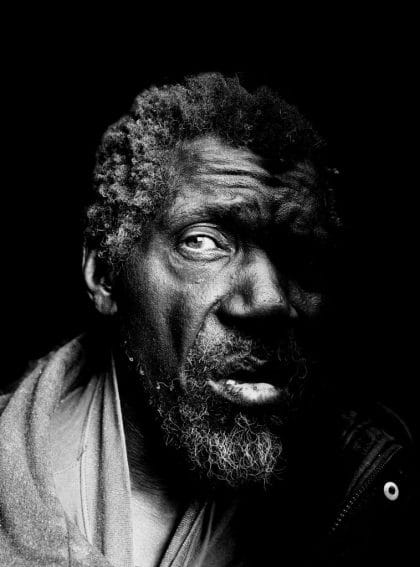 During her time in the degree program, den Bok’s passion for editorial photography has emerged. She hopes to one day secure gigs in fashion, while continuing documentary work on the side. “I want to shine a spotlight on the things that aren’t being spotlighted in mainstream media,” she says. “With my education I can find jobs that pay the bills while continuing to donate profits for projects like Nowhere to Call Home to organizations in need.”

While den Bok attributes her main source of inspiration for the Nowhere to Call Home series of books to Jeffries’ work, on a subconscious level, a motivation closer to home likely factored into her work’s trajectory.

den Bok’s mother was homeless as a child, growing up in the streets of what was then Calcutta, India. Police officers found her, injured, and took her to Mother Theresa’s orphanage where she was cared for until she was adopted at five years of age. She moved with her new family across the world to Stayner, Ontario. 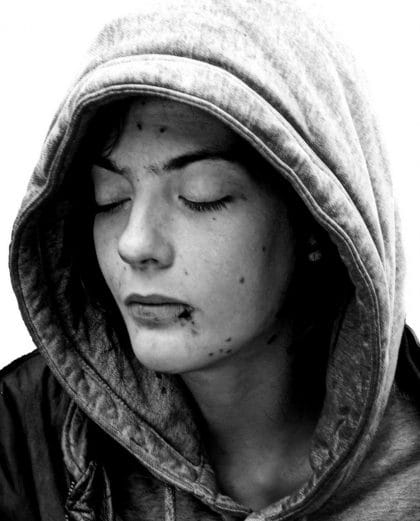 In some ways, den Bok’s work has come full circle, serving as an inspiration to others who see her exhibitions, social media accounts, and, the people she shoots. One of her first subjects, a young woman named Lucy, connected with den Bok by email a couple years after she took her photo. Lucy shared that upon seeing her face on the cover of the first Nowhere to Call Home book, she felt motivated to seek treatment for her opioid addiction.

“I continue my documentary work because I want the general public’s perception of homelessness to change,” says den Bok. “It’s a significant problem in society and it’s easy to turn away from it, but we must not ignore it.” Through her speaking engagements, including the upcoming Hope in the City series as a partner with the Salvation Army, she addresses common misconceptions and debunks stereotyped attitudes.

A quote from Mother Theresa posted on den Bok’s website reads: “If you judge people, you have no time to love them.” It holds much more than a sentimental value to the burgeoning photographer.

Pictured at top of page: “Homeless Man and Dog” by Leah den Bok.