Alumna teams up with Paul McCartney on children’s book

A long-time Beatles fan, children’s illustrator Kathryn Durst (Bachelor of Animation ’12) says she always thought it would be neat to see iconic musician Paul McCartney in concert. Not in her wildest dreams did she imagine that the experience would have her meeting the former Beatle face-to-face back stage, him holding samples of her work in hand.

Durst is the illustrator behind McCartney’s soon-to-be released children’s book, Hey Grandude!, which follows an elderly, magical gentleman called Grandude as he goes on adventures with his four grandchildren.  The book will be published by Puffin Books in the UK, and Random House Children’s Books in North America.

While the book’s release was announced in September 2018, Durst has been waiting nearly two years to see Hey Grandude! reach store shelves. The process first began in November 2017, when Durst’s UK-based agents told her that McCartney was in search of a collaborator for the book. She sent him her work samples, then waited six months before she was told McCartney selected her work from a group of several other artists. 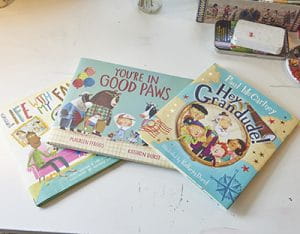 “The publisher sent me the manuscript, and I started drawing. It was intimidating at first – of course I wanted Paul to like my work,” says Durst. “But once I got started, it became just like any other project.”

In the case of Hey Grandude!, Durst was told that McCartney wanted to approve her initial concepts, and that his assistant would arrange a time for them to connect. Instead, McCartney called her out of the blue.

“I was driving, and didn’t think much of seeing a missed call from the UK – I figured it was my agent,” she explains. Durst pulled into the parking lot of a local library to check her voicemail. It was Paul McCartney.

She returned the call immediately, making notes on the back of blank receipts she found in her car. After all, who was she to keep a Beatle waiting?

“When I met him, he seemed just as excited about the book as I was. It was surreal, but super inspiring to see someone as prolific as Paul McCartney still making new things and working on new projects.”

McCartney told Durst how he envisioned the Grandude character and some of the quirky elements he wanted incorporated. “He had seen my drawings and gave me a few notes, but he wasn’t pushy at all…he gave me a lot of creative control,” she says. McCartney imagined the Grandude character as an eccentric British gentleman, suggesting he wear a coat with lots of pockets that could contain various magical items. Durst also incorporated eccentricities into the story, including whimsical objects such as an old gramophone and tea set in Grandude’s slightly untidy house.

Durst and McCartney connected periodically in the months that followed, although Durst wasn’t allowed to tell anyone that she was corresponding with a former Beatle. The pair met in person in September 2018, when McCartney flew Durst and her dad to his concert in Montreal. At the same time, the book’s release was made public.

“When I met him, he seemed just as excited about the book as I was,” she says. “It was surreal, but super inspiring to see someone as prolific as Paul McCartney still making new things and working on new projects.” 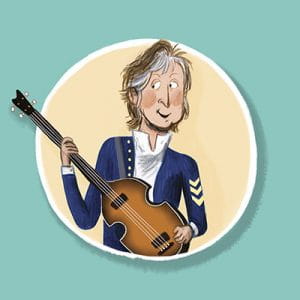 Hey Granddude! isn’t the only book Durst will be releasing in September. You’re in Good Paws, written by Regina, Sask.-based children’s author Maureen Fergus and illustrated by Durst, tells the story of slightly distracted parents who accidentally take their son, Leo, to the animal hospital to get his tonsils out. Dust’s other big-name clients have included children’s publishers such as Owl Kids, Scholastic (UK) and Penguin Random House.

Children’s illustration has always appealed to Durst, even while she was studying Animation at Sheridan. She recalls Animation professor Chris Walsh and life drawing instructors Geordie Miller and Tim McCormack encouraging her unique style, which she says is inspired by the folk art and her Eastern European background.

Durst completed a three-month internship with Pixar while at Sheridan, and the positive response to her student film prompted entertainment studio JibJab Media to offer her a job on the spot during Sheridan’s Animation Industry Day. From there, Durst went on to animate for children’s studios Little Tugboat, Guru Studio and TinMan Creative Studios.

“The thing is, I’m not a great animator,” admits Durst. “I’m good, but I’m slow. But I was always strong with character design and storyboarding, which are the elements you really need to create storybooks for kids. I knew that was something I eventually wanted to try.”

In 2013, she began building up her own illustration business. One of her favourite aspects of the job is tapping into the mental space of being a kid all the time. She also continues to work on her technical drawing skills, running a life drawing course in Toronto, hoping to impact other artists the same way she was influenced by her Sheridan professors.

Durst’s future is jam-packed. Along with attending book launch events with McCartney in September, she’s also working on a new project with a publisher, and has plans to write her own children’s books in the future. She says working with McCartney inspired her to find ways to step out of her comfort zone and stretch her creative muscles. “Paul’s a true example of how it is to experiment and try new things – that’s the mark of a true artist.”